4 Secret Spots To Best View Sunsets At The Beach

When you’re heading to the beach, wouldn’t it be nice to know where the locals go for the best views of the sunset? Often official guidebooks inadvertently create a bottleneck effect, resulting in visitors all heading to the same places — an especially disappointing situation when it comes to drinking in the magical moments of a sunset. Instead, let’s take to heart these valuable insider tips, as we home in on a handful of popular beach towns. Ready for the big reveal? Here are four locally beloved places known to offer the most idyllic settings to watch the sunset at the beach.

For good reason, the stunning monolith Haystack Rock jutting into the sky is a popular place to watch the sunset in Cannon Beach. But to escape the crowds and get a singular sunset view of the iconic sight, leave your car at Les Shirley Park and head to the nearby seagrass-covered dunes just north of Ecola Creek. The approximately 30-foot dunes form a ridge ideal for picnicking while watching the sun-soaked sky. From this hidden-gem location, you’ll enjoy sweeping views from Haystack Rock to landmarks Chapman Point and Bird Rocks and possibly the enduringly mysterious Tillamook Rock Lighthouse.

If you’re wondering where the secret hotspot for sunset viewing is in Ocean City, follow the lead of the locals and head to the new rooftop restaurant Spain Wine Bar at the southern end of the 10-mile-long beach town. Perched atop Cambria Hotel, the restaurant opened in May 2021 and is on the bay facing west, conveniently poised to watch the sun drop. Those-who-know can attest to the spectacular panoramic views of the setting sun over the ocean and in the distance, Assateague Island, beautifully enjoyed with a bottle of wine and a charcuterie board. 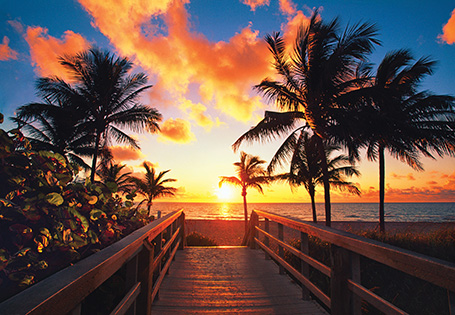 At the south end of Siesta Key is the sleepy Turtle Beach, overflowing with nature — not bustling crowds — so you can easily revel in the burnt sun disappearing on the horizon. If you’re a shell collector, arrive early as the destination is known for shelling in addition to its magical sunsets. And as you might expect, Turtle Beach is a nesting ground for endangered sea turtles. Keep your eyes open for turtle activity during nesting season, from May to October. Getting there couldn’t be easier: If driving, leave your car at the nearby free parking lot, or choose to ride the free Siesta Key shuttle. Biking is another great option because of bike paths along the beach.

To truly bask in a Southern California sunset experience among the who’s who of the glamorous town of Malibu — just north of Los Angeles — book a table on the balcony of the oceanfront restaurant Nobu Malibu. It’s little known that the terrace overlooks the beach, a setting which attracts the hottest local celebrities and influencers. Naturally, the net effect creates the unmistakable “only in LA” vibes. Though filled with the rich and famous, the environment is calm and quiet, offering a rejuvenating solo escape or romantic date night. Find free parking nearby, stroll to your swanky table and under the orange-pink sky, let the mood take over.