When in Fort Lauderdale, it never takes long before you hear a reference to the city’s once apt (and recently reinterpreted) motto: “Where the Boys Are.” That 1960 movie about a gaggle of Midwestern college girls who came to Florida’s Gold Coast for unfettered fun inspired countless spring break pilgrimages to Fort Lauderdale.

Watery Ways
The best way to get your feet wet is to hop on the Water Taxi, which plies the Intracoastal Waterway and New River, making 13 stops from the Galleria Mall and Las Olas Boulevard to the Convention Center. The most impressive stretch of the Intracoastal is known as Millionaire’s Row: manicured properties with lavish mansions and yachts moored out front.

Ride the Water Taxi to the end of the line and Riverwalk, which hosts the Urban Market every Saturday, selling everything from handmade soaps to Peruvian street food. The waterfront esplanade runs alongside several downtown highlights, including the Museum of Discovery and Science, home to an IMAX theater and the largest living Atlantic coral reef in a museum, and the Museum of Art Fort Lauderdale, displaying works by American Impressionists and visiting Latin American artists.

The Jungle Queen offers several fun family outings to explore the area’s waterways, with the requisite touch of kitsch that makes it a local institution. Every evening, the two-story riverboat leaves the Bahia Mar Beach Resort on a tour of the river and canals, ending at a private riverside location where a buffet and alligator show are on the menu. It’s a sit-back-and-soak-it-all-in kind of affair, with the captain providing commentary along the way.

Pedaling and Dog-Paddling
For something less sedentary, rent a beach cruiser bike for a few hours to explore the two miles of promenade along the ocean. The showers every few blocks make a cool-off swim in the ocean all the more appealing.

Another prime place to take a dip is the W Fort Lauderdale hotel, where Sunday pool parties, open to the public, draw see-and-be-scenesters to what’s arguably Florida’s sexiest pool (in the hotel’s lobby, you can peer through portholes cut into the ceiling above for views into the pool).

Pedaling back south, turn west at the Las Olas Bridge to access the Finger Islands—narrow residential streets with names like Isle of Venice and Fiesta Way. Here canals that were dredged in the 1920s are lined with a patchwork of old Florida bungalows (disappearing fast) alongside enormous Spanish Mediterranean mansions.

Shopping the Boulevard
The city’s most sociable street, Las Olas Boulevard, is lined with establishments that range from diners and trendy restaurants to needlepoint shops and European couture. Seek out shops like Blue, the outpost of Key West jewelry designer David Symons. His organic pieces are displayed alongside eclectic beach finery such as colorful sarongs from Kenya. During the 1970s, the owner of Moda Mario dressed the stars of Miami Vice. Nowadays, the real-life yacht set stop by for prêt-à-porter European clothing and hard-to-find brands for men and women. Celebrity of Las Olas is a sure bet for swimwear, with an ever-present sale rack of good buys. And follow the scent of molten chocolate to Kilwin’s, an ice cream and candy shop whose peanut-brittle waffle cones take the cake.

If you’re visiting on a Sunday, be sure to hit the Gourmet Farmers Market. Residents catch up on neighborhood news while browsing the handful of tented stalls. Though the range of products is small, the quality is high: The guacamole guy pounds his dip to order, with a mortar and pestle used by the indigenous people of Colombia. From Argentinean empanadas filled with ham and cheese to ceramics from Provence, the items for sale here are as diverse as Fort Lauderdale’s residents.

Tony Kantorski pulls his red pickup truck alongside the market every week. In the back are coolers holding grouper filets, Key West pink shrimp and a Florida favorite: stone crab claws that he’ll crack open for you with the back of his ice scoop and serve with a spot of lemony mustard sauce. It’s a high-life indulgence served in laid-back Florida fashion—much like Fort Lauderdale itself, these days.

All Resorts in Florida South Coast 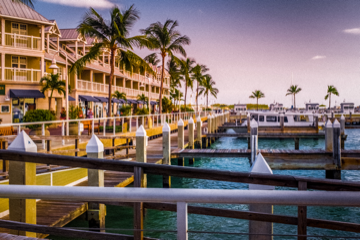 On the island Hemingway made famous, go your own way with unexpected adventures... Read More 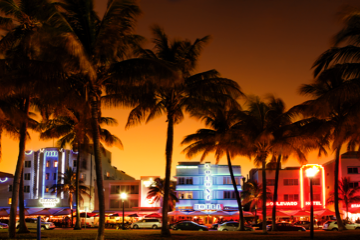 This town has long been known for its nightlife and beach scene. But Miami has upped the ante in the areas of food, art and design... Read More 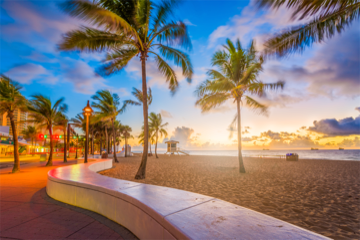 Bliss Out in Fort Lauderdale

Fort Lauderdale just can’t seem to shake its reputation as a place where college kids behave badly. As one local .... Read More