A good rule of travel, if not of life: When you come upon a ferry, you should take it. Visitors to Gulf Shores, Alabama, will find just such an opportunity at the end of the road west of town. That’s where the Fort Morgan (or its sister boat, the Marissa Mae Nicole) picks up passengers (in cars, on bike and walking) for the short trip across Mobile Bay to Dauphin Island, a barrier island at the mouth of Mobile Bay. Aside from the fresh salt air, the ferry lets Gulf Shores day-trippers avoid the 80-mile detour around Mobile Bay to the bridge connecting Dauphin Island to the mainland.

Though it’s only 14 miles long, Dauphin Island offers visitors an array of options. There’s historic Fort Gaines, which still has the original cannons used in the Battle of Mobile Bay. Birders make a beeline for the 164-acre Audubon Bird Sanctuary, a swath of maritime forest, marshes and dunes that’s a stopover point for migrating birds Families should investigate the Sea Labs Estuarium, where hands-on exhibits teach kids about Alabama’s coastal habitats. Of course you can just cut to the chase and drive straight to Public Beach, three miles from the ferry landing.

Sugar-sand beaches are the Gulf Shores area’s most obvious draw. But as Dauphin Island proves, there’s also history to be explored and wildlife to track. Of course, there’s great seafood, too, especially back in Gulf Shores proper. And anyone who has visited the legendary Flora-Bama roadhouse bar can attest that Gulf Shores wildlife isn’t limited to the great outdoors.

Back aboard the ferry and primed from the visit to Fort Gaines, passengers can shut their eyes and imagine distant thunder as bombardment. After all, this is the stretch of water where Rear Admiral D.G. Farragut is said to have ordered his Union vessels to proceed through Confederate-strewn mines (then called torpedoes) with the legendary words: “Damn the torpedoes. Full speed ahead!”

Once you’re on the mainland, you’re only minutes away from Fort Morgan, which dates back to before the Civil War. Visitors to this National Historic Landmark can wander through battlements used during the Spanish-American War and touch artillery relics. Drop three quarters in the swivel-mounted binoculars to get a look at the very waters where the battle was fought.

Bird lovers who visit this beautiful area tend to flock to the Bon Secour National Wildlife Refuge, a 7,000-acre preserve that’s home to loggerhead sea turtles, alligators and more than 370 species of birds, including the horned grebe, yellow-bellied sapsucker and cedar waxwing—all most easily spotted in winter. From December through March, not only are there more migrating fowl, but the refuge’s miles of trails are cooler and relatively insect-free. Make sure to check out the two-mile Pine Beach Trail, which cuts through magnolia, slash pine and live oak before reaching the dunes that defend the coast from hurricanes.

OYSTER-FUELED
Not all hurricanes require such stout defenses. The bar at the Original Oyster House serves up a furious fruity concoction called the Hurricane Ivan, made with 151-proof rum and topped by a paper umbrella. If you need some ballast after that, try the restaurant’s legendary baked oysters in garlic butter, followed with a plate of blackened mahi. That should give you all the fuel you need to explore Gulf Shores’ many beaches, from Cotton Bayou to Florida Point.

For convenience, it’s hard to beat Gulf Shores Public Beach, the park-and-play beach found where Highway 59 dead-ends at the Gulf. For something quieter, head east on State Highway 182 for Gulf State Park’s five miles of beaches. You’ll find plenty of uncrowded spots perfect for a sunset stroll. This picturesque stretch is a favorite of wedding photographers. Those same wedding parties usually wind up at the Flora-Bama, the self-proclaimed last great American roadhouse that’s a mullet toss from the state line in Pensacola. On Saturday nights, hundreds party in this ramshackle building built from deck lumber, PVC and coated canvas.

Bring cash for canned beer, frozen mixed drinks and barbecue, all sold from carnival-like tents. On a recent night, a pair of cover bands (Knee Deep and Lucky Doggs) played two separate stages with passionate, if predictable, playlists. (Lynyrd Skynyrd’s “Sweet Home Alabama” packed the dance floor.) Shout out “Roll, Tide, roll!” after the title lyric if you want to be taken for a local (and fan of the University of Alabama’s Crimson Tide).

The Flora-Bama invites graffiti and, ahem, other forms of liberation: Dozens of signed and surrendered bras hang overhead. A wedding reception here would certainly give the in-laws something to talk about—and it has, apparently. Written in Sharpie along an upper rail: “Britt and Gav’s wedding reception, 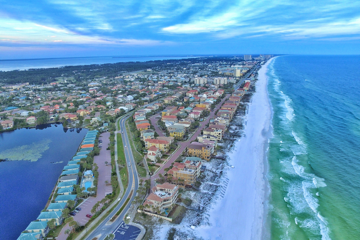 Given the number of high-rise hotels that now line....Read More 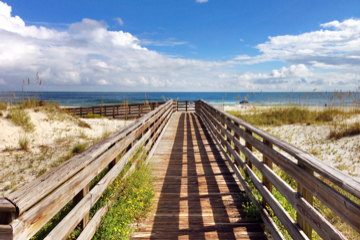