As you cruise down Kings Highway in Myrtle Beach, South Carolina, you’ll pass buffet barn after barn, each with a sign shouting “170 items!”, “150 items!” or “200 items!” The owners hope that diners will rush in from nearby beaches to load up on barbecue, fried seafood, “chicken bog” and piping hot hushpuppies. These Southern-flavored all-you-can-eats are kitschily entertaining, rather tasty and a pretty good deal.

The same can be said of this coastal portion of the Palmetto State. There are so many different things to sample in the Myrtle Beach area—miniature golf, spas, musical revues, shag dancing, outlet shopping, amusement parks, beachcombing—that you might feel as if you’re tackling a monster buffet. So pick up a plate, decide what you’re craving and see how much you can pile on, given your limits. Here’s the best of all Myrtle Beach has to offer.

Welcome to the Grand Stand
Myrtle Beach is the main hub of what’s known as the Grand Strand, some 60 miles of shoreline, small towns and strip malls, running from Little River at the North Carolina border southward to Georgetown. Towards the southern end is Pawleys Island, which became a warm-weather getaway back in the 1700s for plantation owners seeking cool beach breezes. In the same century, pirates (like Edward Teach, a.k.a. Blackbeard) hid out in the coves, barrier islands and marshes around Little River. One hundred years later, Civil War blockade runners did the same thing. All along this stretch of coast, miles of fine sand, dunes fringed in sea oats, and ragged maritime forests rife with wax myrtles and live oaks are set off by the everchanging blues of the Atlantic Ocean. At the turn of the last century, developer F.G. Burroughs and his sons capitalized on the area’s appeal by building a railroad that barreled into Myrtle Beach.

Decade by decade, Myrtle Beach blossomed. The first golf resort and the waterfront Pavilion opened in the 1920s. By 1950, the rebuilt Pavilion had its own lavish carousel. Soon an 11-acre, Coney Island–flavored park had sprung up, with sweets shops, hot dog joints, soda fountains, ice creameries and attractions (miniature golf, Ferris wheels and bumper cars) that stretched along Ocean Boulevard. Flat-roofed motels sprouting giant cement pelicans, shells and the like were joined by highrise resorts. And beachfront bars were crowded with people doing the “shag,” a Lowcountry dance in which partners hold one hand, then slip-slide across the floor. And that free hand? Well, you’ve got to hold your drink, now, don’t you?

Past meets present
Today, Myrtle Beach is transitioning into a carnival of a different sort. Yes, the beaches are still beautiful, but now the buildings stand 20-plus stories high and are squeezed shoulder-to-shoulder along Ocean Boulevard. Resorts have indoor water parks and spas. The old Pavilion is gone, but there’s a new, mile-long boardwalk (undergoing major reconstruction, to be completed this summer). Many of the mid-century motels have been refreshed, and their old-time cement accessories now hold vintage appeal.

Inland, a former Air Force Base has been refashioned as a shopping hub/neighborhood called the Market Common (marketcommonmb.com), where you can get a superb steak at Divine Prime, walk or bike Valor Park, or check out the sales in stores like Anthropologie and Pottery Barn. At the entertainment complex Broadway at the Beach (broadwayatthebeach.com), Ripley’s Aquarium draws crowds to its walk-through tank tunnel and baby animal exhibit, and MagiQuest fulfills kids’ Harry Potter dreams with interactive wand play. The Carolina Opry (thecarolinaopry.com), the first of the revue-style shows in the area, won the Governor’s Cup for the state’s most outstanding tourism attraction a while back. And there are now more than 100 highly ranked golf courses.
In the old days, things were a little wilder here. In recent years, however, reinforced helmet laws and noise ordinances have tamped down “Bike Week,” and stricter decorum and rental policies inhibit the former spring break rowdiness. These days, Myrtle Beach is showing its mainstream persona year-round, and adding affordable luxuries to the picture. Maybe that explains the 14 million-plus visitors who appear annually.

All Resorts in Myrtle Beach 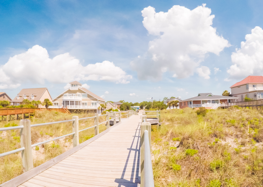 The crews who dug the Intracoastal Waterway in the 1930s probably... Read More 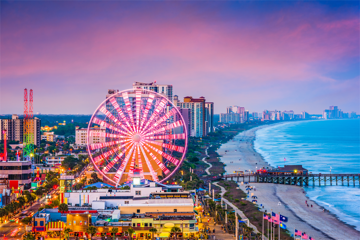 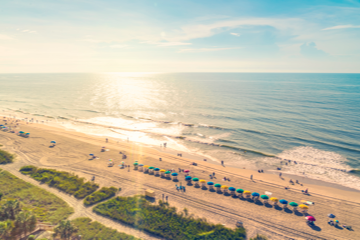