Día de los Muertos, or the Day of the Dead, is a Mexican holiday celebrating life and death. Every year, families welcome back the souls of their deceased relatives for a festive reunion with food, parties, parades, and prayers. Unlike Halloween, with its more frightening undertones, Día do los Muertos honors the joy and spirit of the lives of the deceased. The ritual dates back thousands of years to the Mesoamerican cultures of the Aztec, Toltec, and Nahua people who believed it was insulting to mourn the dead. Today, the Mexican celebration is a culmination of indigenous, Hispanic, European, and Christian customs celebrated the world over. Here’s a look at how just a few cities celebrate.

In Ecuador, the Day of the Dead is known as the “Day of the Ancestors,” blending in its own unique cultural take on the occasion. Visitors and townspeople alike don costumes symbolizing the ritual’s iconic calaveras, or skulls. The metaphor of brightly colored skeletons with human characteristics speaks to the belief that “todos somos calaveras,” meaning “we are all skeletons.” At night, the town’s cemeteries, including the historic Corner of Souls cemetery, comes to life with dancing, singing, and storytelling. 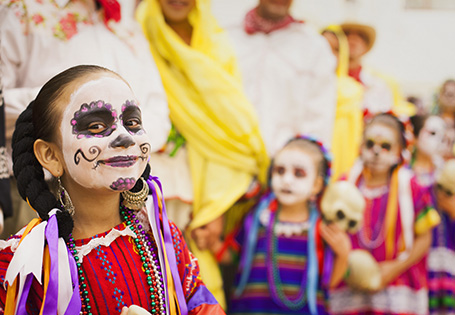 For those looking to celebrate Día de los Muertos for the first time in the holiday’s home country, Mexico City is your best bet. One of the capital city’s newest offerings is the carnival-esque parade, Mega Desfile de Día de Muertos, or Mega Day of the Dead Parade. The spectacle features large skeleton puppets, traditional dancers, and live music. Visitors to Mexico City can also see the magnificent altars in the main square of Zócalo. These altars, known as ofrendas, are often adorned with beautiful marigolds, candles, and food honoring the dead.

There are a variety of Día de los Muertos festivities across Mexico, each with its own regional flare, and celebrations in Oaxaca are no exception. Expect to find the same colorful Day of the Dead entertainment along with a few notable local customs. Oaxaca is home to the unique tradition of specialized rug-making in honor of the holiday. Unlike in most major cities where prizes are awarded for the most spectacular ofrendas, villagers showcase ornate, sawdust rugs celebrating the afterlife. Villagers also dress up paths to the graves of their ancestors using candles, marigold petals, and décor to help guide the souls of the dead.

San Antonio is home to what many consider to be the largest Día de los Muertos celebration in the United States. Spanning for more than a week, several of San Antonio’s premier neighborhoods host parties and festivals, including La Villita Historic Arts Village and the Pearl District. Local chefs and street vendors offer freshly baked Pan de Muerto, or bread of the dead, a sweet bread topped with anise seeds and decorated with skulls and bones made from dough. There is also plenty of live music, a sunset candlelit vigil, and the Catrinas on the River Parade, a nautical parade featuring themed boats and barges.