When temperatures begin to soften and the scent of spring is palpable, it’s time to head outdoors for some music under a balmy sky. Combine the sounds of the city with energizing melodies at these outdoor waterfront music venues, allowing you a fresh way to soak in the spirit of the place. From symphonic, country, rock ‘n roll to the blues, these oudoor music venues and music festivals have you covered.

If mesmerizing music under the stars with warm breezes off the Pacific Ocean is your idea of a perfect time, you’ll want to add the newly opened The Rady Shell at Jacobs Park to your bucket list. It’s the west coast’s first permanent waterfront music venue and the first-ever such venue to be operated solely by a symphony. The $85 million San Diego venue is named after its architecturally stunning shape which resembles a shell perched on the water and skillfully engineered to provide unparalleled acoustics. From Beethoven’s Ninth Symphony to Trombone Shorty’s Voodoo Threauxdown, the schedule is varied and enticing.

This prized 1 ¼ mile stretch along the Chicago River in the heart of the city is unquestionably one of the city’s newest bedazzling destinations for food/drink and music. One could be persuaded that the entire Riverwalk is an uninterrupted music venue as most days you’ll hear live music pouring from indoor-outdoor establishments including The Northman, Tiny Tapp & Café, and O’Briens Riverwalk Café. From jazz to R&B, gospel to blues, the buzzy waterfront destination — flanked by iconic architectural structures — will draw you in, no matter your musical preference. Dubbed the Confluence, a greenspace at the Riverwalk’s west edge bedecked with Adirondack chairs ensures yet another possibility for scheduled programming, perfect for those wanting to recline and enjoy music while watching the river’s continuous parade of boat traffic. 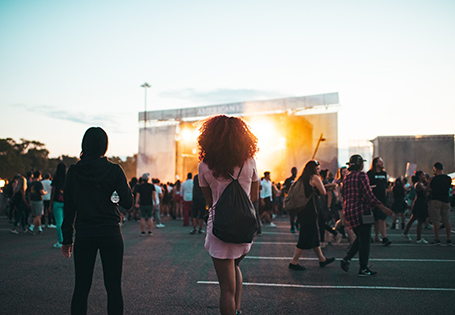 After taking a 2-year hiatus for safety reasons, Portland’s beloved Waterfront Blues Festival is back, marking its 35th year. Located in the heart of the city at Tom McCall Waterfront Park on the Willamette River, the popular festival is held over the Fourth of July weekend and attracts as many as 80,000 attendees. The lineup is pending release — but as a teaser, past artists included favorites such as The Robert Cray Band and The California Honeydrops. Not missing a beat, the top-notch music is paired with top-notch food, served up by some of the city’s favorites including Olympia Provisions and Boke Bowl. Adding energy to the party, you’ll be treated to picturesque views of the city’s iconic 100 + year-old Hawthorne Bridge, the Marquam Bridge and Mt. Hood in the distance.

D.C.’s newest coolest neighborhood along the Potomac River is a playground for all ages, a district known for its shopping and restaurants as well as entertainment. Injecting the air with tunes and happy vibes, busking starts up in the spring — apropos of the world coming out of hibernation. Throughout the long hot days of summer, The Wharf gifts you with free top-rated music at the Transit Pier every Wednesday at 7 p.m. While taking in exceptional music, enjoy stunning views of city lights shimmering over the water and some of DC’s iconic sights in eyeshot. The music will keep your dance moves sharp — ready for the fall music lineup which includes DC JazzFest.