The lingering chill in the air and crunch of leaves on the ground means autumn has arrived — and so has spooky season! If you’re traveling, get into the Halloween spirit by checking out these five cities with haunted attractions and ghost tours that might give you the fright you’re looking for.

In California, San Francisco’s Fisherman’s Wharf bustles to life with boutiques, fresh seafood eateries, and barking seals. But gaze out into the chilly waters of the bay and you might just see the eerie outline of Alcatraz Island through a veil of fog about a mile out. The island, while unassuming in the distance, was once a maximum security prison from 1933-1964 and hosted some of the most notorious criminals, including prohibition-era mobster Al Capone. Today, spirits of the former inmates are known to roam the cell blocks, and you can experience the paranormal activity for yourself by taking a tour, accessible by a 20-minute ferry ride through Alcatraz Island Tickets.

2. The Dark Side Of The French Quarter In New Orleans

Many flock to New Orleans, Louisiana, to peruse the French Quarter’s lively atmosphere of bars, restaurants, and music at all hours of the night and day. While the flowing drinks and famous creole food are reason enough to frequent this city, peel back the layers of its history and you’ll discover a nefarious past that includes lore like voodoo, witchcraft, and even vampires. Experience it for yourself by taking a walking tour with Witches Brews Tours. You’ll be guided through a darker side of the French Quarter through haunted architecture, cemeteries, and more while learning about each stop’s haunted past. Take plenty of pictures, then look closely at them afterward — you might just catch a social ghost or two on-camera. 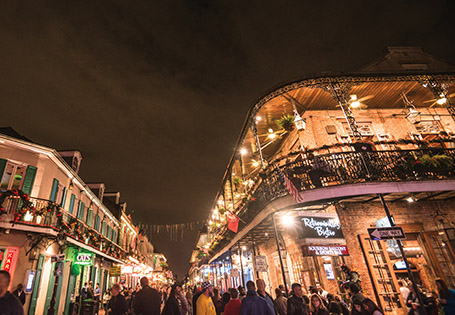 3. Raise Your Glass With Ghouls In Savannah

By day, the historic city of Savannah, Georgia, appears quaint, with charming town squares, craftsman bungalow homes, and the clop of hooves on cobblestone from horse-drawn carriages. But come nightfall, it tells a different story where ghostly patrons have been known to socialize at many of the town’s old structures, restaurants, and bars. Embrace the paranormal with the nightlife by taking the Boos and Brews Ghost Tour, an award-winning haunted pub crawl that takes you through some of Savannah’s spookiest bars and breweries. Grab a cold one at each stop and sip as you go!

Our nation’s capital could be considered an open-air museum with all of its historic sites and statues, while the beloved cherry blossoms attract attention each spring as they blanket the grounds in pastel blooms. But this buzzing, picturesque city also boasts its fair share of haunted attractions. Locals and visitors alike have sworn they’ve spotted the spirits of former presidents Abraham Lincoln and Andrew Jackson roaming the White House as well as countless others appearing in Lafayette Park. If you’re bringing the family to D.C. and looking for spooks appropriate for all ages, you’re in luck! The Georgetown Ghost Tour is a light-hearted tour that’s more likely to draw laughter than scares, but you’ll still learn about history, curses, and eerie coincidences while walking along one of Washington D.C.’s seemingly picturesque neighborhoods.

5. Gangsters And Ghosts In Chicago

Chicago, Illinois, is home to the Magnificent Mile, Millennium Park, and of course, world-famous deep dish pizza. But it also serves up its own flavor of haunted attractions connected to a dubious past. In the roaring 20s, gangsters called the shots in the city and created an underbelly of crime that scattered along every dark corner and alleyway of the Chicago Loop. Today, their ghosts have been spotted making their presence known all over the city, and you can get the whole inside scoop on the Gangsters and Ghosts Tour in Chicago. This walking tour will take you to all the spooky sites like the Palmer House, Death Alley, and the world famous Congress Hotel.