The South Africa Safari Guide To The Best Wildlife Encounters

A South African safari is often top of many holidaymakers' travel bucket lists - and for good reason. The chance to see some of the world's most beautiful animals in stunning national parks, is a very special holiday experience.

Whether you are looking for a romantic break for two, or a family adventure, you’ll find a diverse and fascinating mix of options here in these blogs to tempt and delight. But one of the most essential and memorable experiences has to be a safari adventure, which will capture your heart, mind and imagination.

There are many destinations where you can immerse yourself in nature and the great outdoors, but South Africa is home to some of the world’s most diverse and evocative landscapes, from verdant forests to soaring mountains.

Here we look at five fabulous parks, plus some top tips for travel in South Africa, to make sure you holiday safely while getting the best out of your time away. 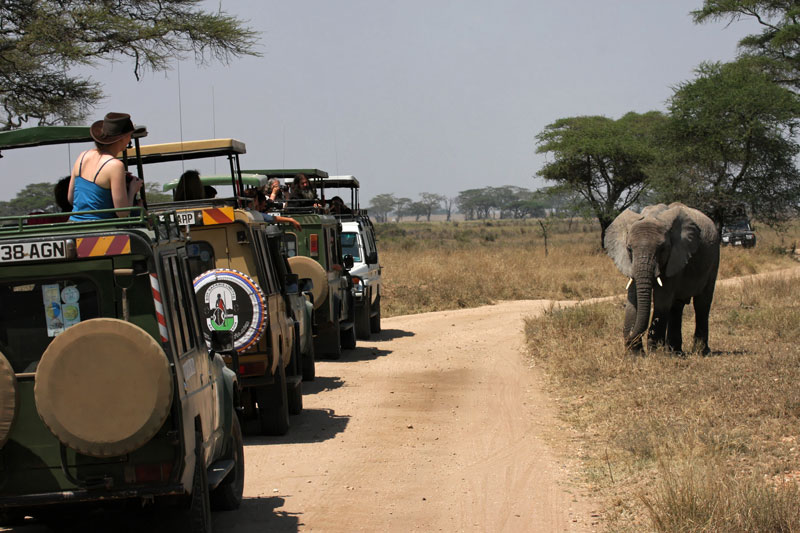 A South African safari is on many holidaymakers' travel bucket lists. Getting up close to the Big Five in some of the world's most beautiful landscapes, what more could you want?

First off, Kruger National Park should rank pretty high on your travel itinerary. As well as one of the world’s largest safari spots, it’s also one of the most popular parks for spotting the Big Five: the lion, leopard, rhino, African elephant and Cape buffalo, as well as providing opportunities to spy on hyenas and cheetahs.

The park is hugely popular with twitchers due to its diversity of feathered species, including eagles, vultures and storks. 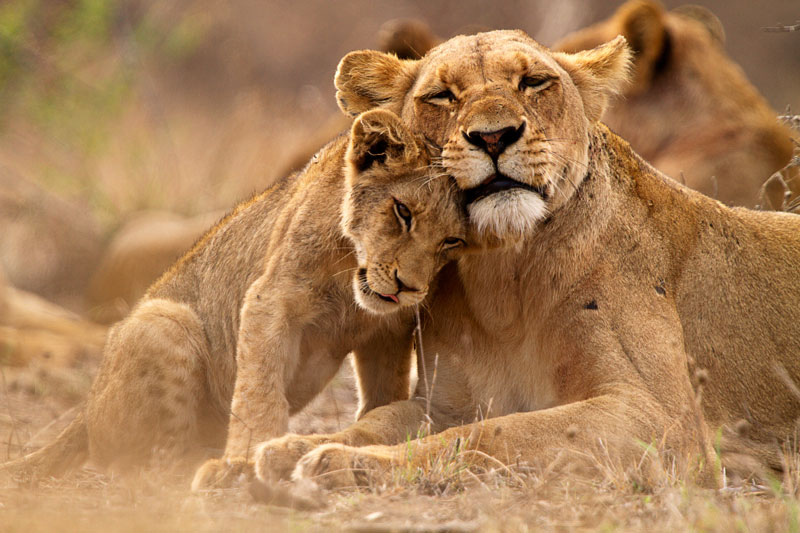 Kruger National Park is one of the most popular places for spotting the Big Five: the lion, leopard, rhino, African elephant and Cape buffalo.

The park rests in the Mpumalanga and Limpopo regions, covering nearly two million hectares of ground lined with baobab trees and other flora and fauna. It was established in 1898, following a 12-year mission by Paul Kruger to conserve the lowveld wildlife.

Today it’s a self-drive park, but guided trips are available to discover the area’s rich diversity, as well as bush walks and wilderness trails where you can truly get out and explore.

Given the park’s mammoth scale, you’ll want to select the right area to explore, depending on your wildlife goals. The park is divided into four key regions: 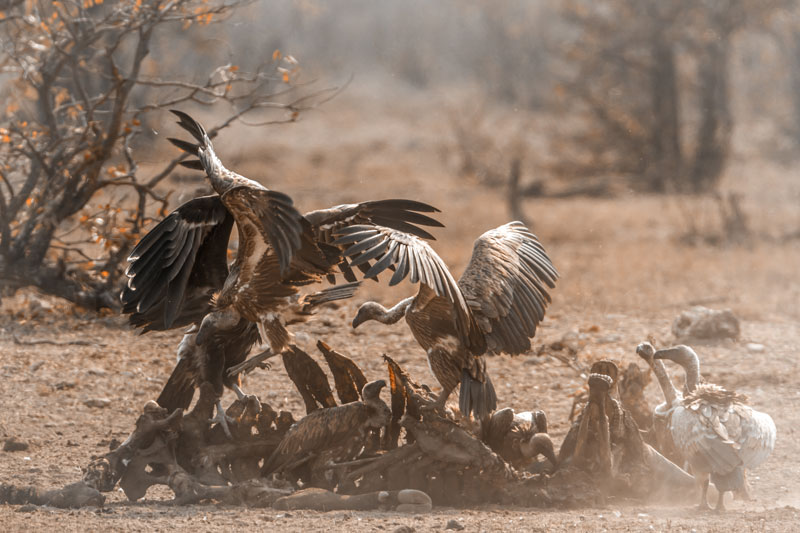 Kruger National Park is hugely popular with twitchers due to its diversity of feathered species, including eagles, vultures and storks, so take your binoculars.

Central - Covering just 30 per cent of the park’s surface area, surprisingly this section supports almost half of the lion population in the park, with over 60 prides roaming among the sweet grasses and abundant trees. You’ll also find leopard, hyena and cheetah in these parts. 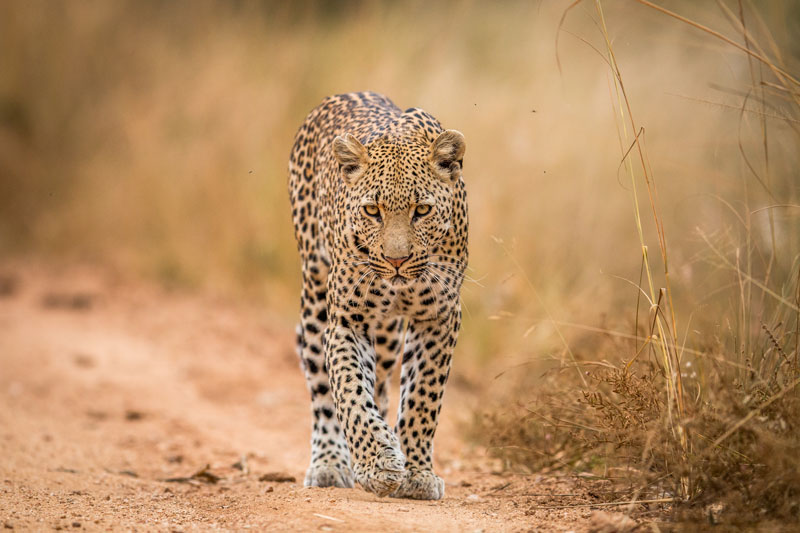 Leopards are the least social, but are perhaps the most beautiful of the African big cats.

Far North - The eco zones here contrast from other habitats in Kruger. Visit for rare birdlife around the river flood plains and forest areas, and expect a veritable get-away-from-it-all encounter with pockets of complete solitude and remoteness.

North - This semi-arid area covers 2,702 square miles of low-lying valleys, interspersed by five rivers, where you will find as much as 60 per cent of the park’s hippo population, as well as elephant, buffalo and impala. 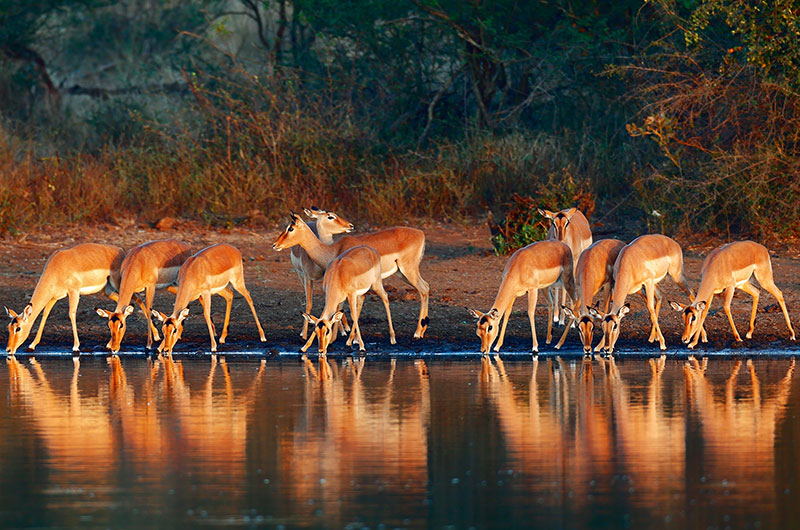 To the north of Kruger National Park, you will find as much as 60 per cent of the park’s hippo population, as well as elephant, buffalo and impala, pictured above.

South - Bordered between the Crocodile and Sabie Rivers, the southern region is lined by the rugged Lebombo Mountains, along the border with Mozambique. As well as fauna which is unique to this region, visitors should look out for the rare white rhino around Pretoriuskop, Mbyamiti River and south of Lower Sabie. 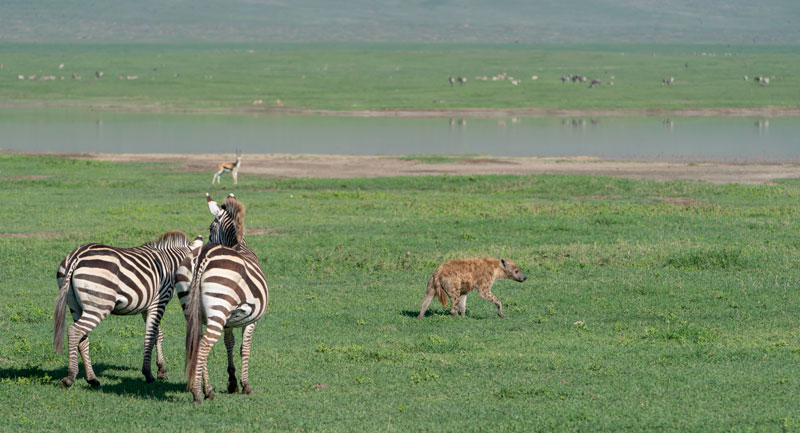 Hans Merensky Nature Reserve lies just over an hour’s drive west of Kruger National Park - and although a significantly smaller park in comparison, it’s still worthy of your attention.

The reserve is named after notable conservationist and geologist Hans Merensky. It rests along the banks of the great Letaba River, increasing your chances of spotting some majestic mammals, including the zebra, wildebeest, warthog, giraffe, hippo and the more aloof, spotted hyena, leopard and jackal. 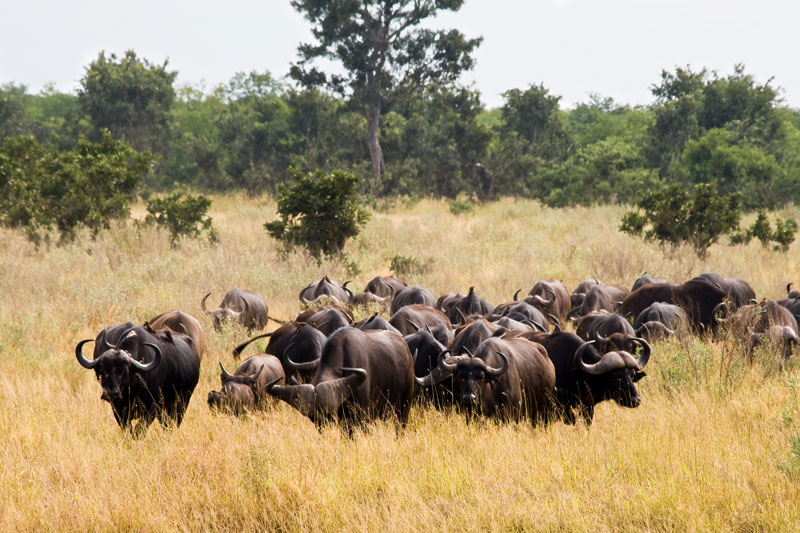 Hans Merensky Nature Reserve lies just over an hour’s drive of Kruger National Park, along the banks of the Great Letaba River, increasing your chances of spotting some majestic mammals, including wildebeest.

This park is perfect if you prefer to ditch the vehicle and get out on foot, with a variety of trails to explore, ranging from one to 20 miles.

You should also consider arranging a horseback ride, as zebra will often interact with horses, so it will make a unique animal encounter to remember.

Following a hike, where better to finish up than at the reserve’s very own spa with a steaming hot mineral water spring to recuperate, ready for another day of revelling in the great outdoors. Or if spas are not your thing, perfect your swing with a game of golf on the estate, where crocodiles and hippos provide new meaning to the term ‘water hazard’! 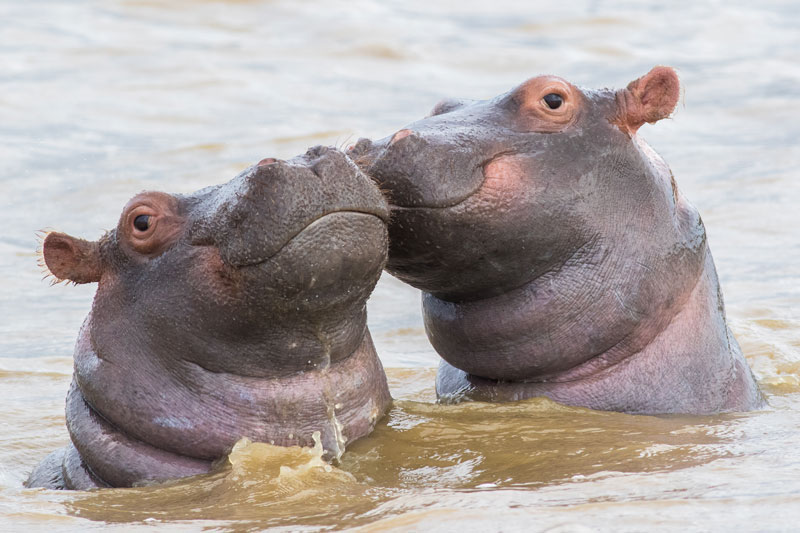 You might even spot some hippos having a dip in one of the lakes at Hans Merensky Nature Reserve.

The great outdoors of South Africa are just as renowned for their spectacular scenery, not just the mammals that live within them.

Blyde River Canyon in Mpumalanga forms part of the Panorama Route and the rocky Drakensberg mountain range, so you’re in for a real treat with undulating lush landscapes, dramatic waterfall scenes and the third largest canyon in the world. 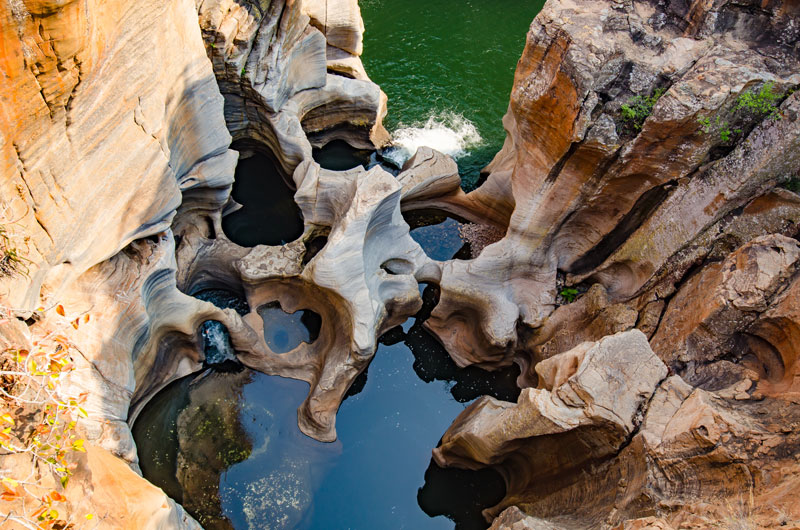 Blyde River Canyon in Mpumalanga, in South Africa, is the third largest canyon in the world, boasting beautiful vistas and lush landscapes.

You’ll find the most number of waterfalls around Sabie, but Mac Mac Falls are particularly impressive. Declared a national monument, the twin falls plunge 70 metres into a gorge below. Time your visit for lunchtime to enjoy a swim in one of the pools before taking lunch in the barbecue and picnic area.

While the views on the ground are phenomenal, the best sights are experienced from above. A helicopter or hot air balloon ride over the canyon and the bushveld will be a thrilling encounter, especially if the eagle-eyed in your party manage to pick out a herd of elephants pounding across the lands. 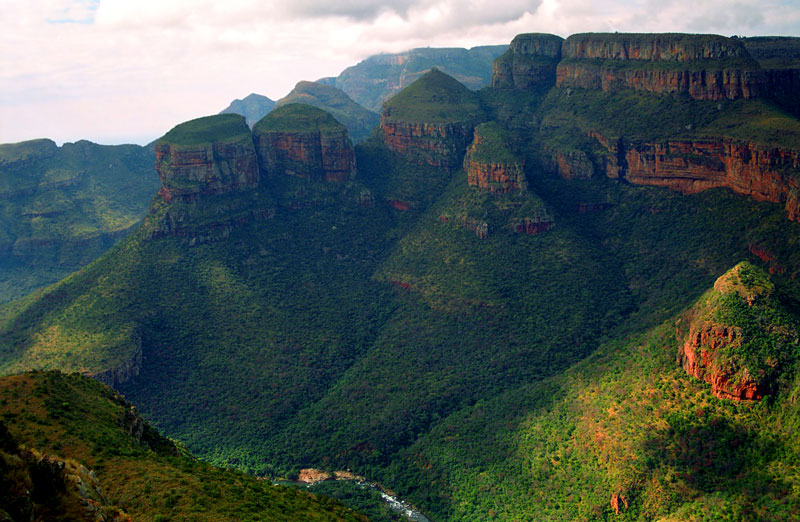 The Three Rondavels, at Blyde River Nature Reserve in South Africa, make a beautiful home for the animals, with miles of greenery and dramatic cliffs.

Mala Mala is one of the oldest private game reserves in South Africa, and today retains a sterling status as a blueprint for the luxury photography safari.

For more than nine decades, the park has focused on the preservation and protection of the land and wildlife and, as a result, many photographers and film-makers choose this reserve for its most consistent and fascinating encounters with wildlife. 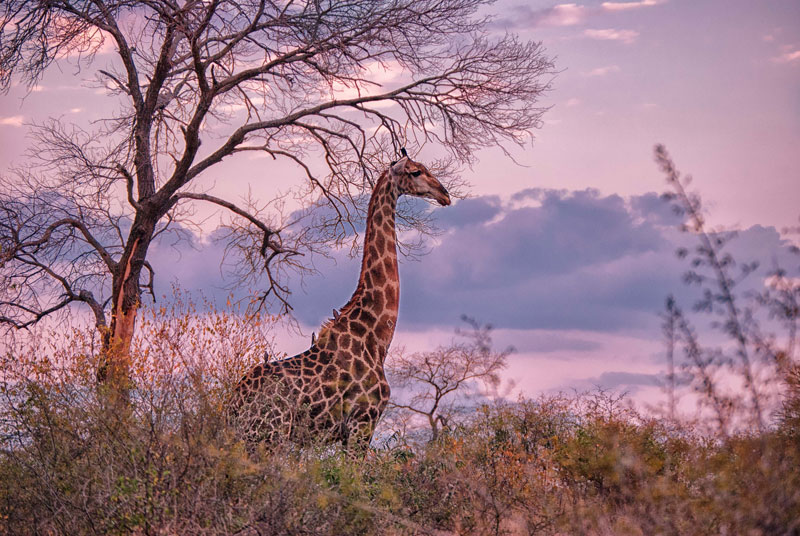 Mala Mala is one of the oldest private game reserves in South Africa and focuses on preservation and protection of both the land and the animals who live there.

The park is sandwiched between Kruger and the Sand River, allowing a whole range of wildlife to roam freely through Mala Mala as they transit through to access water resources, especially in the dry winter months.

And as any budding photographer will attest, capturing those rare moments takes time and patience, which is why the reserve doesn’t put a time limit on sightings.

The no queue to view system is a result of the reserve’s enormous 33,000 acres of land, and the subsequently low density of vehicles traversing the area. So ensure your cameras are fully charged and at the ready! 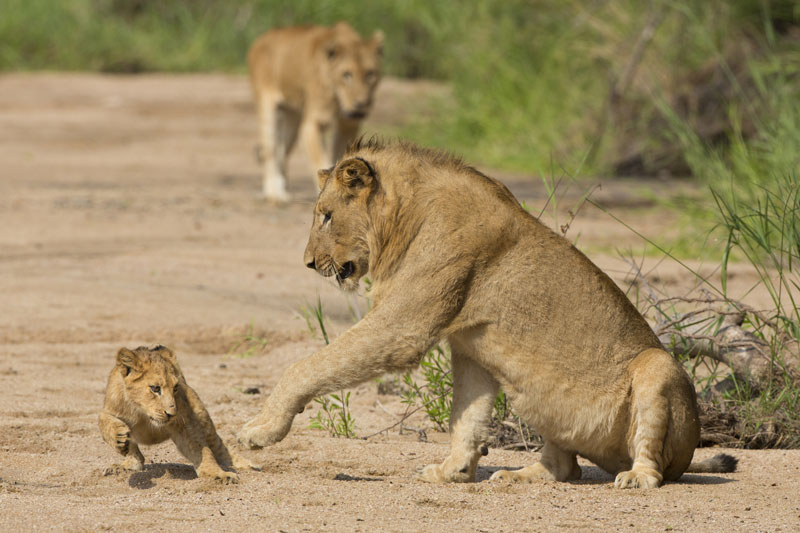 A lion cub enjoys a little rough and tumble with Mum - a wonderful sight not to be missed! 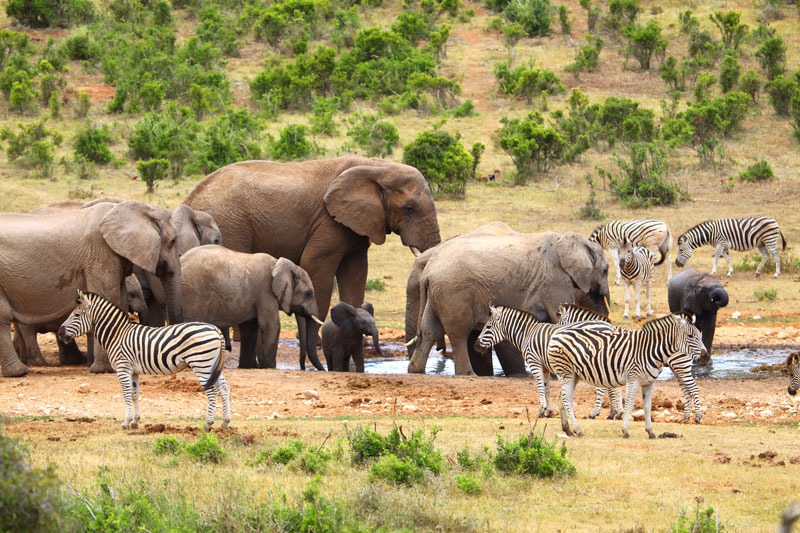 The park provides sanctuary to more than 600 elephants — one of the world’s densest African elephant populations — and there is the added bonus of occasional sightings of other members of the Big Five.

The park is divided into four sections: Colchester, Addo, Sunland and Kirkwood, but the best congregation of elephants to view on a self-drive route are in the main game area and the Colchester section. 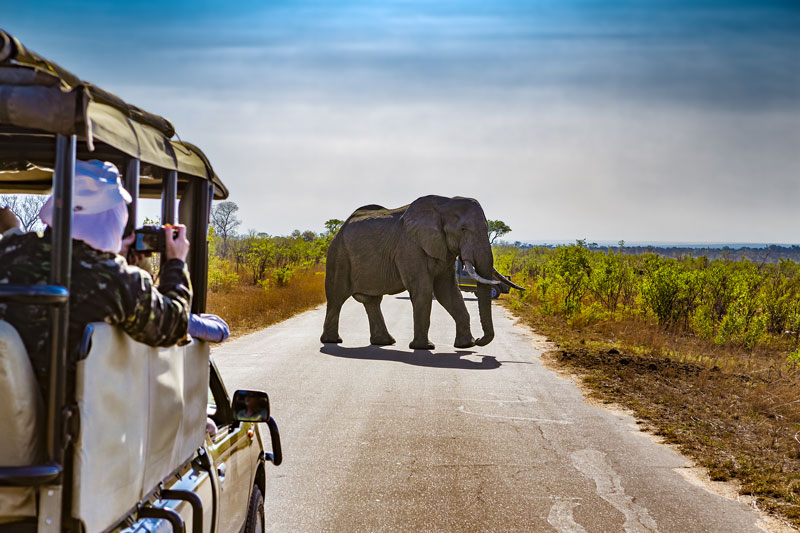 Enjoy a safari around Addo Elephant National Park - camera at the ready!

The coastal areas of the park allow visitors the opportunity to observe the great white shark and southern right whale navigating the waters, as well as playful bottlenose dolphins frolicking around Algoa Bay.

A little tucked away, you’ll also find a huge colony of precious African penguins. It’s thought there are over 6,000 breeding pairs here, so you may want to make a few days of it, spent both inland and on the coast.

Over in Addo, where the park greets the sea, the Alexandria Dune Field is an other-worldly formation of high and wide sand dunes - at its widest point, believed to be three miles! Park your car at Woody Cape Backpackers and stroll along the boardwalk for the best views, or if you’re feeling active and energetic, a two-day hike through the dunes will leave you more than a little acquainted with this stretch of coast!

• Generally, the best time of year to visit is June to September for mammals, and November to March for bird watching.

• Don’t try to cover too much ground, many parks feature huge tracts of land. Slow travel with regular stops will produce better results. 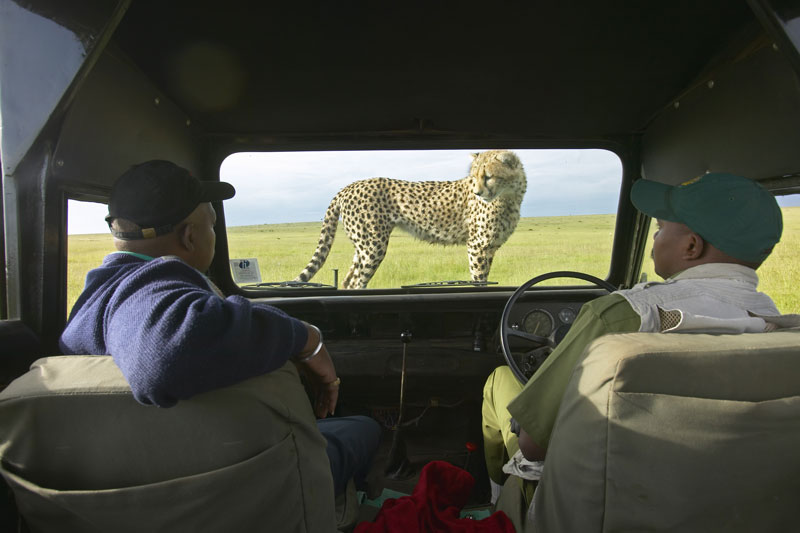 Early mornings and evenings are prime times for wildlife viewing. Travel slow with regular stops to increase your chances of seeing some of the amazing wildlife.

• Early mornings and evenings are prime times for wildlife viewing.

• Some parks require ID upon arrival for those aged over 18. Be sure to carry your driver’s license or passport to avoid disappointment.

• Many parks offer a picnic and barbecue area for day visitors, but a no-alcohol policy is in place, so be sure to leave the wine back at your resort. Check with the parks directly to view their guided game drive times and a full list of rates and activities. 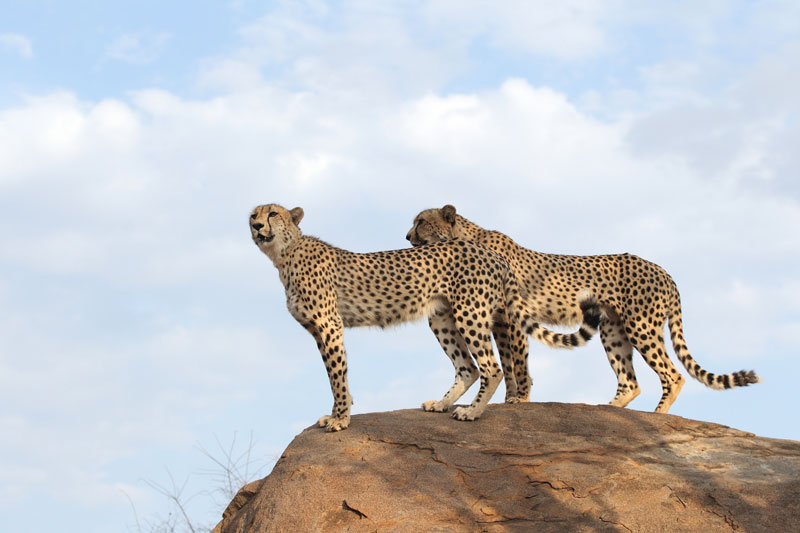 Cheetahs are the fastest land animal in the world - capable of reaching speeds of up to 70 mph - keep your eyes open or you could miss them!

• Choose a reputable safari provider with ethical practices in terms of animal welfare. Kruger National Park is highly regarded for its support of animals and its anti-poaching measures. This guide is a good place to start safari planning, and these tips for responsible travel will ensure you leave landscapes as you found them, and have a positive impact on the communities you encounter.

• If hiring a car, keep the doors locked and windows closed with valuables hidden from view. Keep to main roads and well-lit areas.

• Malaria is one of the highest health risks, especially in Kruger National Park from September to May inclusive. Talk to your doctor about all the necessary medications and inoculations you will need well in advance of travel.

Click here for the latest travel advice for South Africa.

If you are a member of RCI - and even if you're not, but should be - check out the fabulous resorts that are available through RCI membership to see where you could be holidaying, under the South African sun. Just click on the Resort Directory button below.

If you own timeshare, but have yet to join a holiday exchange services provider, then you are missing out on the world of holiday adventure and experiences that awaits you. You can join RCI in just a few simple steps, starting by clicking on the button below.

Around The World In Seven Photos