India is a country of great diversity. From its glistening shorelines to its highest peaks, the country is a patchwork quilt of the most incredible holiday experiences.

With crystal clear waters and a gorgeous white-sand beach, Cavelossim is a perfect getaway for swimming in the quiet waters or enjoying light watersports, such as parasailing and windsurfing. Not many beaches today have retained the original charm of laid back, old Goa, but Cavelossim has managed to keep its aura surprisingly intact. With only a few beach shacks that offer food and drinks, the balance is right for those looking to get away from noise but want minimal comforts. 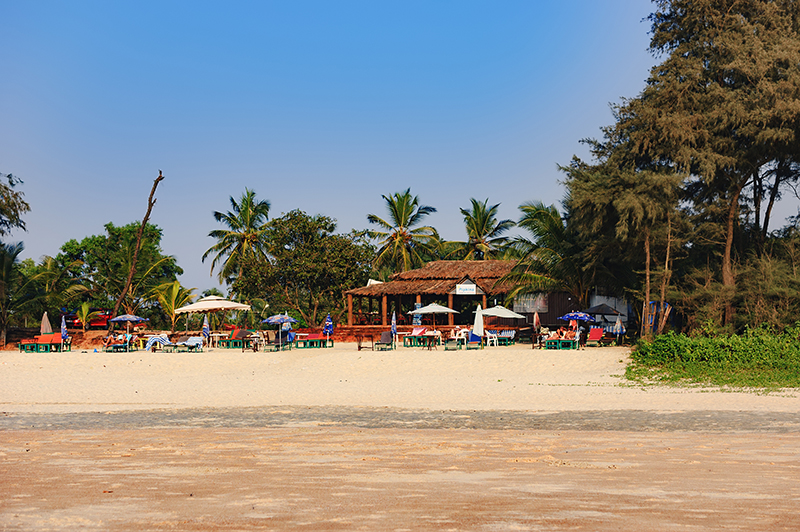 Crystal clear waters and a gorgeous white-sand beach - Cavelossim is the perfect getaway for swimming in the quiet waters or enjoying light watersports, such as parasailing and windsurfing.

Adjoining Cavelossim, a long and narrow strip of beautiful sandbar flanked by the meandering Sal River on the east and the Arabian Sea on the west, is Mobor Beach. It is quieter than Cavelossim and, having abundant greenery, is perfectly suited for contemplative days. Sunsets from the beach are stunning with fishing boats, coconut groves and striking rock formations. The pristine waters and beach also allow for encounters with thriving marine life, such as sea anemones, urchins, starfish and shellfish. Situated at the end of the beach, across the river, the remnants of Betul Fort, constructed in 1679 and later falling into the hands of the Portuguese, offers a mesmerising view of Sal River merging into the sea. 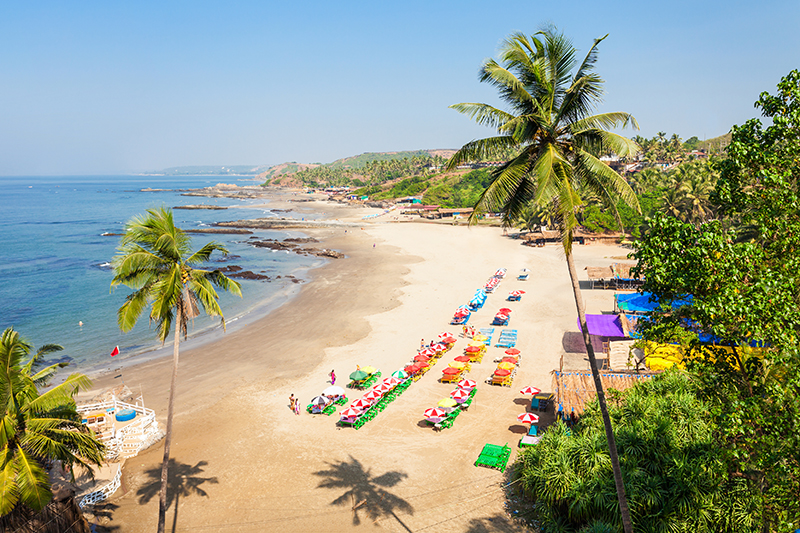 Calangute Beach, known as the 'Queen of Beaches' is flocked to by many holidaymakers. Soak up some sun on the endless loungers or indulge in a variety of watersports, such as parasailing and jet-skiing. By night, the many food and drink shacks lining the beach transform into a shoreline party scene.

Flocked to by many holidaymakers, Calangute, known as the 'Queen of Beaches', and the adjacent Baga Beach, form the beating heart of Goa’s bustling beach scene. Soak up some sun on the endless loungers or indulge in a variety of watersports, such as parasailing and jet-skiing. By night, the many food and drink shacks lining the beach transform into a shoreline party scene. For those inclined to party hard, the famous Tito's Lane is the hub of Goa's celebrated nightlife and is just a short walk from Baga Beach.

Just a short drive from the beaches, Old Goa’s Colonial-era monuments and Fontainhas’ colourful Latin Quarter prove to be fascinating cultural excursions, both of which are World Heritage sites. So, when you want a change from warm seas and golden sunsets, head to one of the few Latin Quarters in Asia at Fontainhas, sequestered within the capital city of Goa, for an unforgettable date with Portuguese culture. Fontainhas today is an enticing melange of brightly coloured colonial houses, bougainvillea-adorned narrow lanes and stunning azulejo - blue glazed ceramic tiles using Portuguese traditional patterns. 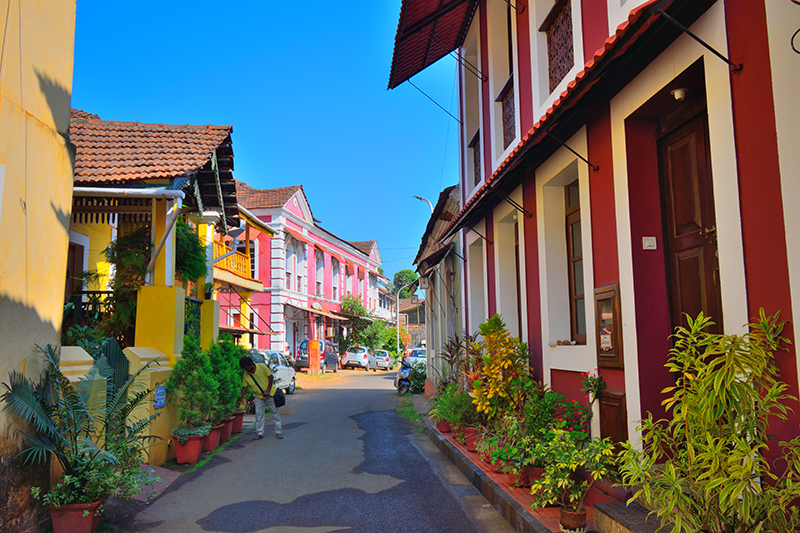 Classy, historical and striking, Fontainhas is a quiet refuge within the bustling state of Goa where art lovers and history aficionados can spend a contemplative day. Visit one of the many art galleries, go for a guided walking tour through old lanes exploring colonial homes, indulge in a ceramic tile-making activity, or sit down for a quiet evening at one of the many places with live music. From iconic Goan cuisine to modern European fusion fare, the food scene in Panjim is too good to miss.

For more holiday inspiration on Goa visit our Goa page.

Mussoorie, the 'Queen of Hill Stations'

India may be famously known for its vibrant culture, opulent palaces and timeless traditions, but a little-known secret of this incredibly diverse country is its stunning mountain scenery. With thousands of miles of Siwaliks (Outer Himalayas), Lesser Himalayas and Great Himalayas, it offers the perfect antidote to the stress of modern living.

Located on a ridge at the foothills of the Himalayas, Mussoorie sits at a height of 1,880 metres in the north Indian hill state of Uttarakhand. A popular summer getaway, the pretty hill station is known today for it’s pleasant weather and nostalgic old-world charm, with its luxurious comforts, colonial attractions and beautiful views of Himalayan peaks. 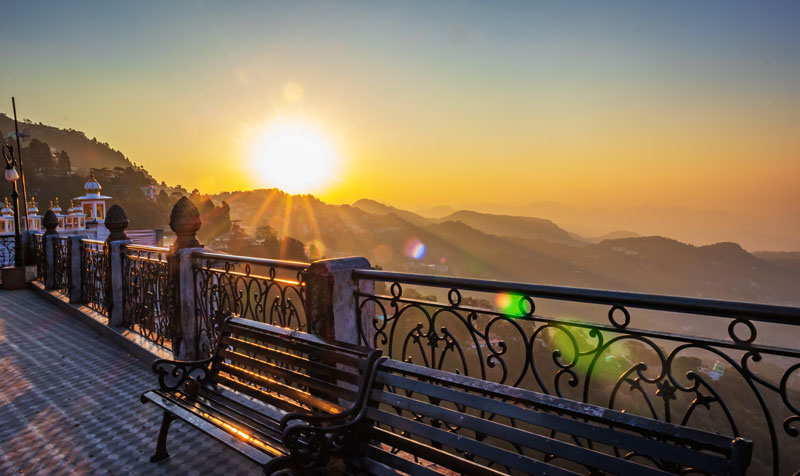 Mussoorie, the pretty hill station, is known for it’s pleasant weather and nostalgic old-world charm, as well as its luxurious comforts, colonial attractions and beautiful views of the Himalayan peaks.

Chosen as an escape from the heat of the plains, the British settled in Mussoorie in the early 1800s, leaving a distinct Victorian influence on the architecture and culture of the place. Today, a heritage walk will take you through opulent mansions, atmospheric churches and public buildings that hark back to the colonial times.

A walk from the bustling Mall Road towards the serene Camel's Back Road shows you two wildly opposite facets of the hill station - a gradual transformation from the glitzy market area to a secluded corner in the mountains. From the Mall Road, a cable car runs roughly 500 metres above Mussoorie to Gun Hill, a popular viewpoint that offers breathtaking views of the Himalayan peaks.

Getting High On Nature

Jabarkhet Nature Reserve is a privately-owned estate close to Mussoorie, where dense oak and pine forests play home to a variety of Himalayan fauna, as well as leopards, black bear, martens and barking deer. Depending on the season you visit, you can see over 300 varieties of flowers in spring, a stunning vista of snow covered peaks during the summers, a white wonderland in winters and a dreamy, rain-soaked solitary escape during the monsoon.

Whether it is the flora you’re interested in, or you want to take a peek at one of the many camera traps fixed in the jungle, a guided tour comes highly recommended. For the more independent and adventurous, maps and trail markers can lead the way. A day spent hiking in the jungles of Jabarkhet Nature Reserve will rejuvenate every tired muscle in your body in a way that only nature can. 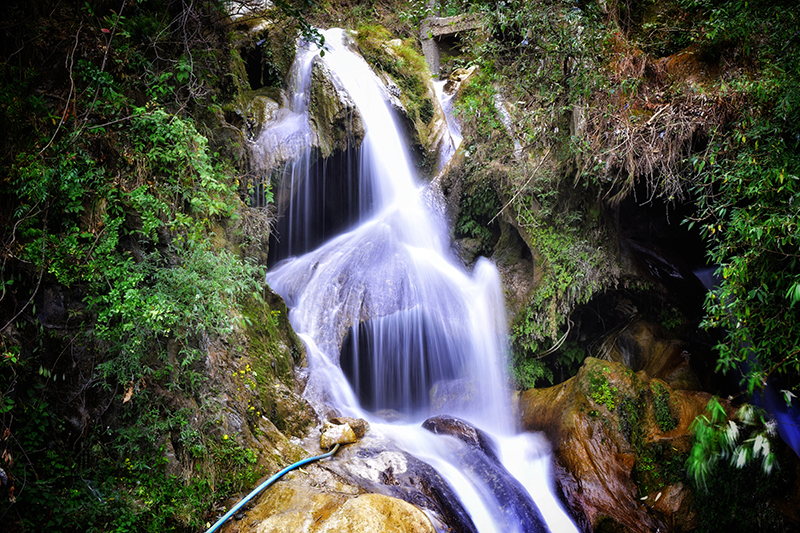 The tranquil natural attraction known as 'Mossy Falls' in Mussoorie is surrounded by jungle greenery and singing birds.

For a place situated high up in the hills, it is only natural that the surroundings are endowed with several cascading waterfalls hidden deep inside gorges and canyons. While Kempty and Bhatta Falls are thronged by hundreds of travellers, there are hidden and offbeat falls, such as Jharipani and Mossy that require some hiking to reach. Your efforts will, however, be rewarded with pristine pools, gorgeous streams and thundering cascades. 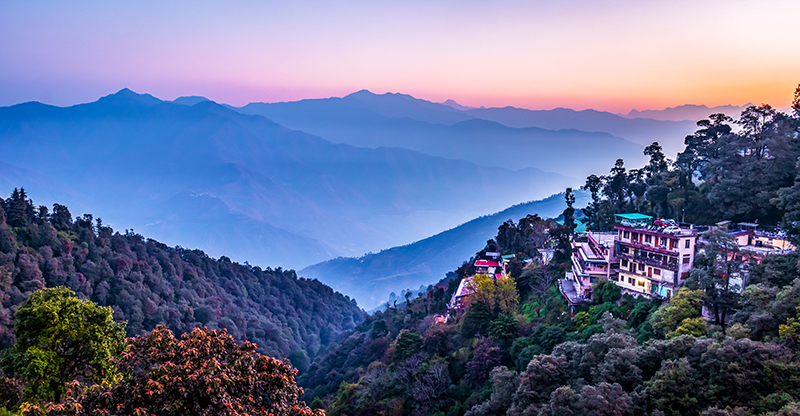 A view of the majestic Himalayas, with the hill town of Landour perched in the mountains.

Barely three miles from Mussoorie is the sleepy mountain town of Landour, a place where time has stood still. It was a cantonment area during British rule and still retains colonial influences, which are apparent everywhere in atmospheric cottages to the fascinating stories behind the names of streets and buildings. The alluring mix of nostalgia and nature in Landour, as well as a strict aversion to commercialisation, makes it an enticing escape from the crowds of Mussoorie. Whether it is walking aimlessly around the forgotten forest paths, or losing yourself in the historic churches, cemeteries and cafés, Landour has magnificent nature and intriguing culture written all over it. 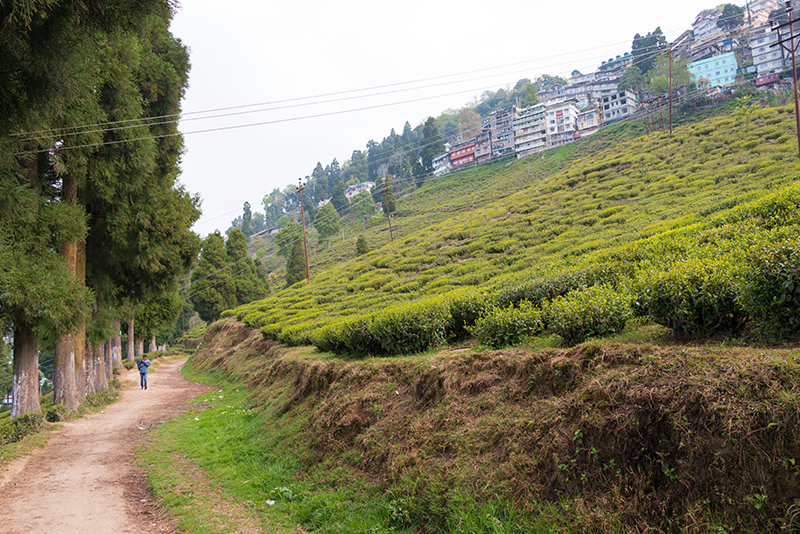 Almost two miles from Mussoorie lies the historic Happy Valley where the Dalai Lama first settled after fleeing Tibet. An oasis of peace, Happy Valley is a great place to go looking for some calming spiritual influences.

Almost two miles from Mussoorie lies the historic Happy Valley where the Dalai Lama first settled after fleeing Tibet. Later, he moved to nearby Dharamshala but he left behind a thriving settlement of about 5,000 Tibetan refugees. Today, the place rings with the notes of Mani Wheels (cylindrical Tibetan prayer wheel on a spindle), Buddhist chants and fluttering prayer flags. An oasis of peace, Happy Valley is a great place to go looking for some calming spiritual influences. 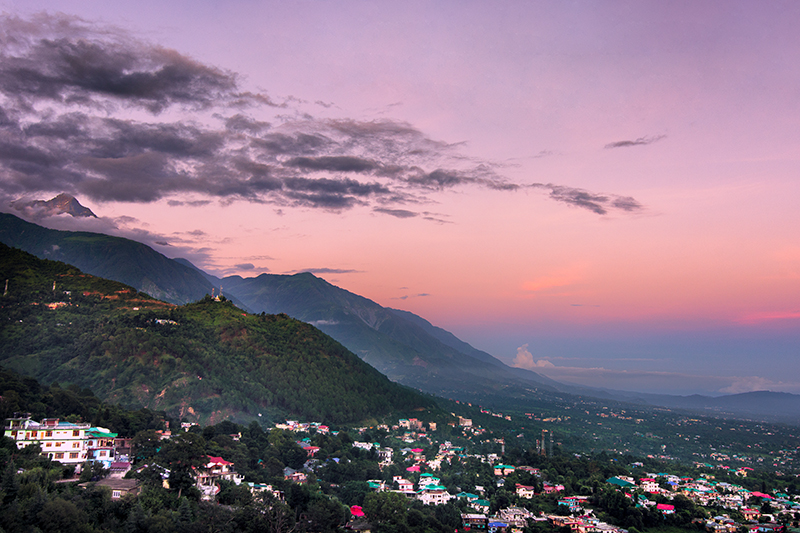 Sunset in Dharamshala. Perched on the edge of the Himalayas, the city is now home to the Dalai Lama.

If you would like to make India your next holiday destination, whether you prefer Goa's golden shores, or Mussoorie's mountain highs, there are plenty of options. Click on the RCI Resort Directory button below to select your accommodation.

If you own timeshare but are not a member of RCI, you can join our holiday exchange community today. Click on the Join RCI button below and sign up in just a few simple steps.

How To Use RCI.com: Top Tips To Get The Best From RCI Membership