Top Things To Do In Umbria, Italy 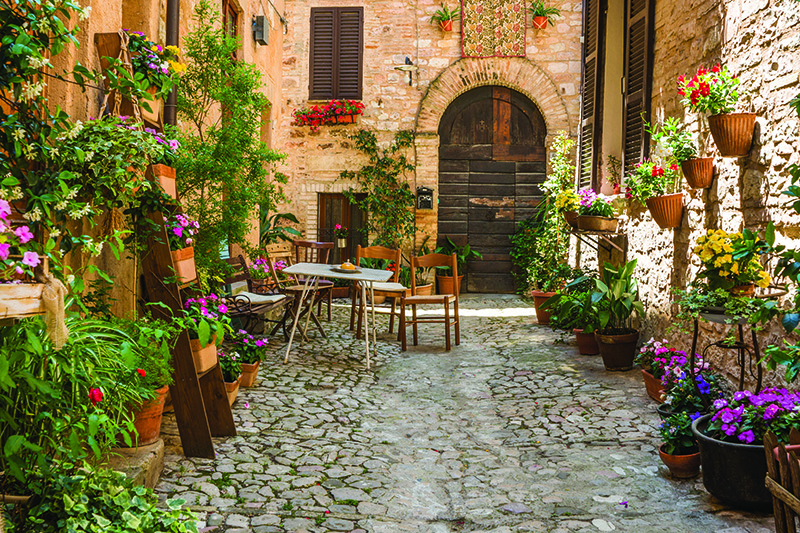 Explore one of the beautiful cobbled streets - adorned with vibrant coloured flowers - have a rest and take in your surroundings.

Prepare for a change of pace when you arrive in the rolling hills and valleys of Italy’s Umbria region. Put the finish line out of the picture and simply click pause, because you will want to take things slowly, as Umbria reveals its many beautiful charms.

The ‘green heart’ of Italy charms visitors with its wooded peaks, hilltop towns and sunsets the colour of amber. Its attractions are subtle, letting the slow burn of love for this region wash over you as you discover the meadows of wildflower carpets, the delicious cheeses and meats unique to Umbria, and castles that have stood for a millennium. Take ‘slow’ Italy at the speed it deserves in these three remarkable destinations. 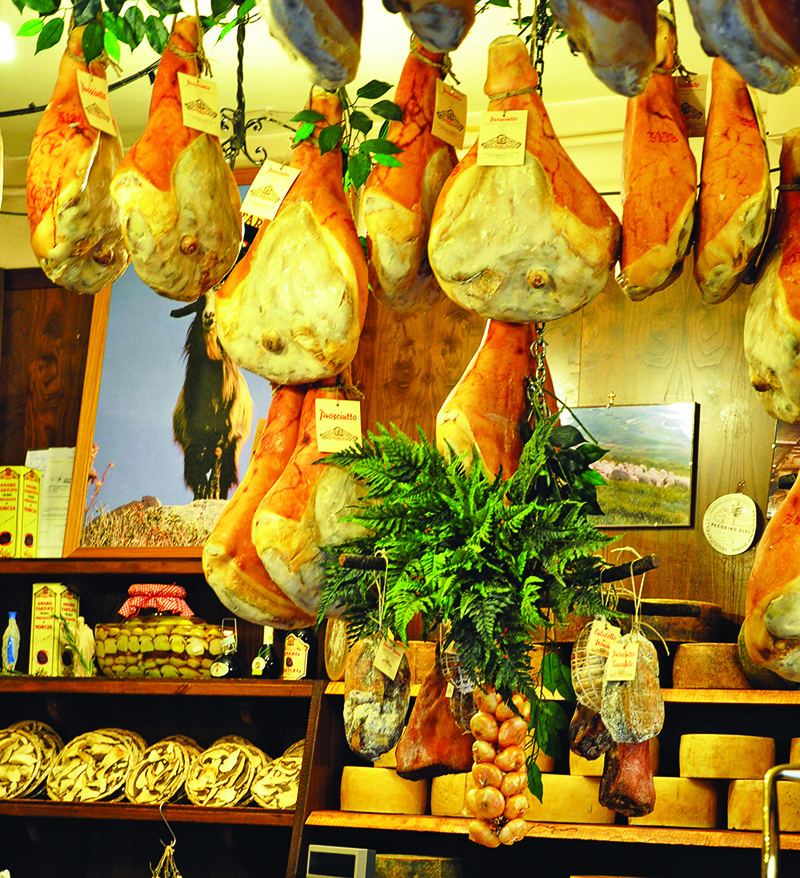 Its attractions are subtle, letting the slow burn of love for this region wash over you as you discover the meadows of wildflower carpets, the delicious cheeses and meats unique to Umbria. 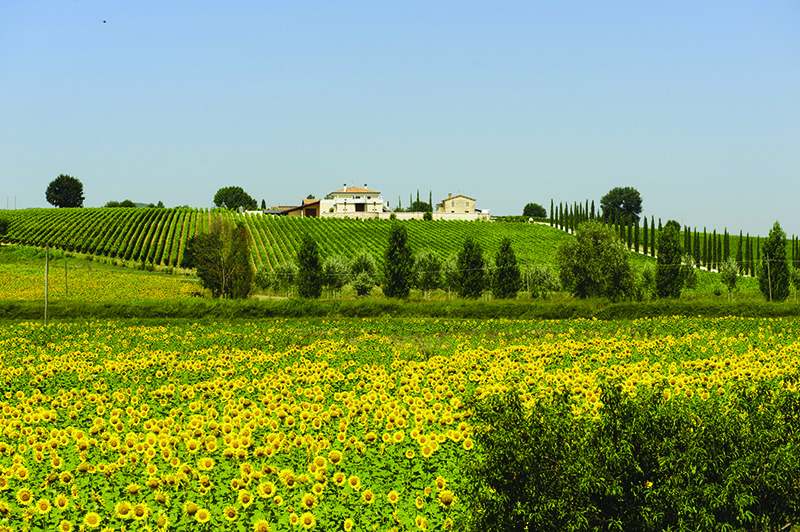 You have to run your finger a long way down the list of Italy’s biggest cities - past Catania, Padua, Rome and Milan - to find Perugia, the capital of Umbria. The manageable size of this medieval city, which sits on the River Tiber, is a reflection of Umbria itself: easy to get around; peaceful and just as charming as neighbouring Tuscany but less expensive; and ornately decorated by history and culture. Even in summer, you won’t find crowds of visitors in Perugia, and in autumn and spring this laidback university city will feel like it’s yours to explore.

Take your time to examine the age-old façades around the Piazza IV Novembre, where the Fontana Maggiore provides a tranquil, trickling soundtrack to your slowly sipped latte. Browse the shops at leisure along the Corso Vannucci before taking a rest in the delightful Giardini Carducci, which sits atop the fortress of Rocca Paolina. Little remains of the original building, though you can take a closer look at its skeleton as you ride the famous underground escalators that connect the lower town with the historic centre. 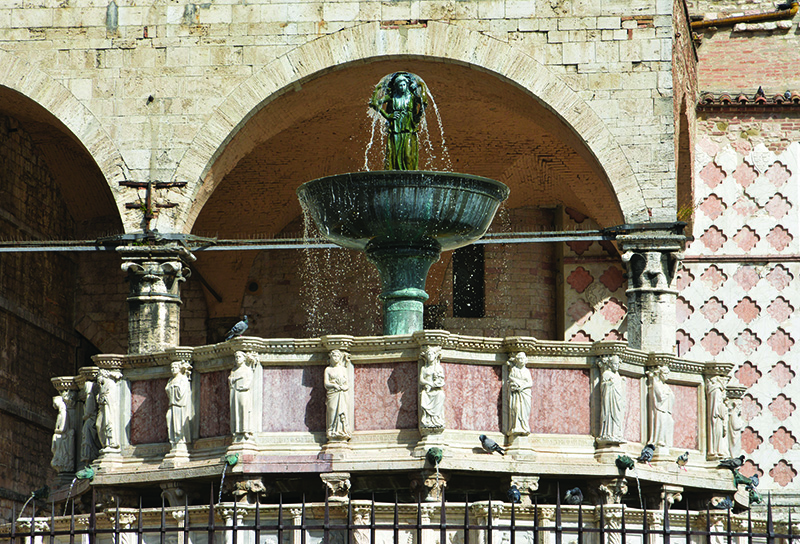 Take your time to examine the age-old façades around the Piazza IV Novembre, where the Fontana Maggiore provides a tranquil, trickling soundtrack to your slowly sipped latte.

Summer in Perugia is known for its musical feasts, but October claims the delicious schedule of the Eurochocolate Festival, devoted to the city’s production of Baci and Perugina chocolates. Should you miss the sweetest festival in Italy, the museum and chocolate factory of the Perugina Casa del Cioccolato are open year round. As if you needed reminding that Umbria’s culture is wrapped in dramatic countryside, you need only gaze out from hilltop Perugia, across the olive groves and wooded slopes of the region, to where your next destination awaits. 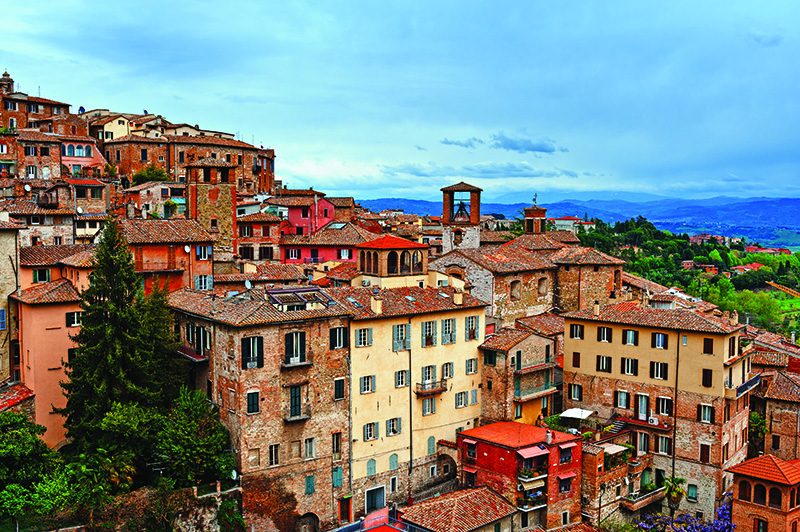 As if you needed reminding that Umbria’s culture is wrapped in dramatic countryside, you need only gaze out from hilltop Perugia, across the olive groves and wooded slopes of the region, to where your next destination awaits. Summer in Perugia is known for its musical feasts, but October claims the delicious schedule of the Eurochocolate Festival, devoted to the city’s production of Baci and Perugina chocolates. 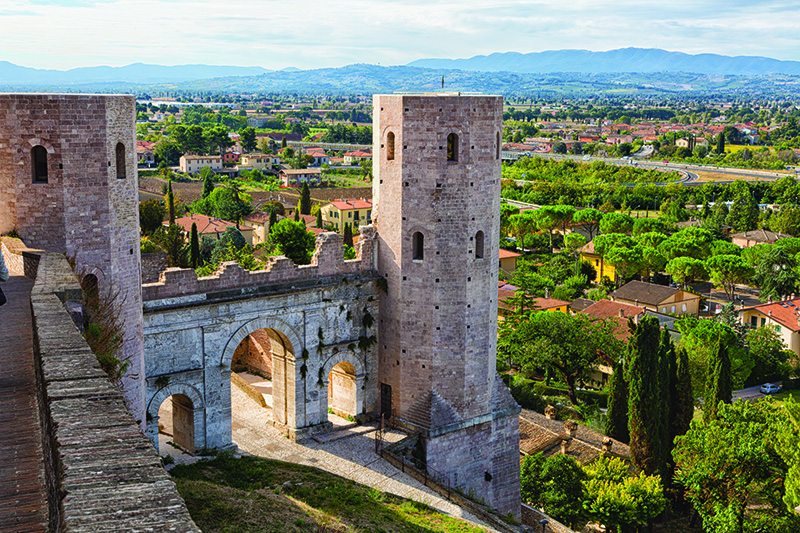 The Roman town is entirely surrounded by walls, which are one of the most accurate examples of ancient fortification preserved in Italy.

With its neat vineyards, rolling landscapes and cypress-crowned hills, Umbria’s beauty compares easily with that of Tuscany. However, the advantage goes to Umbria when it comes to travelling to and from the region’s tourist areas. For example, just 30 minutes by road from the city of Perugia is the ancient hilltop town of Spello. 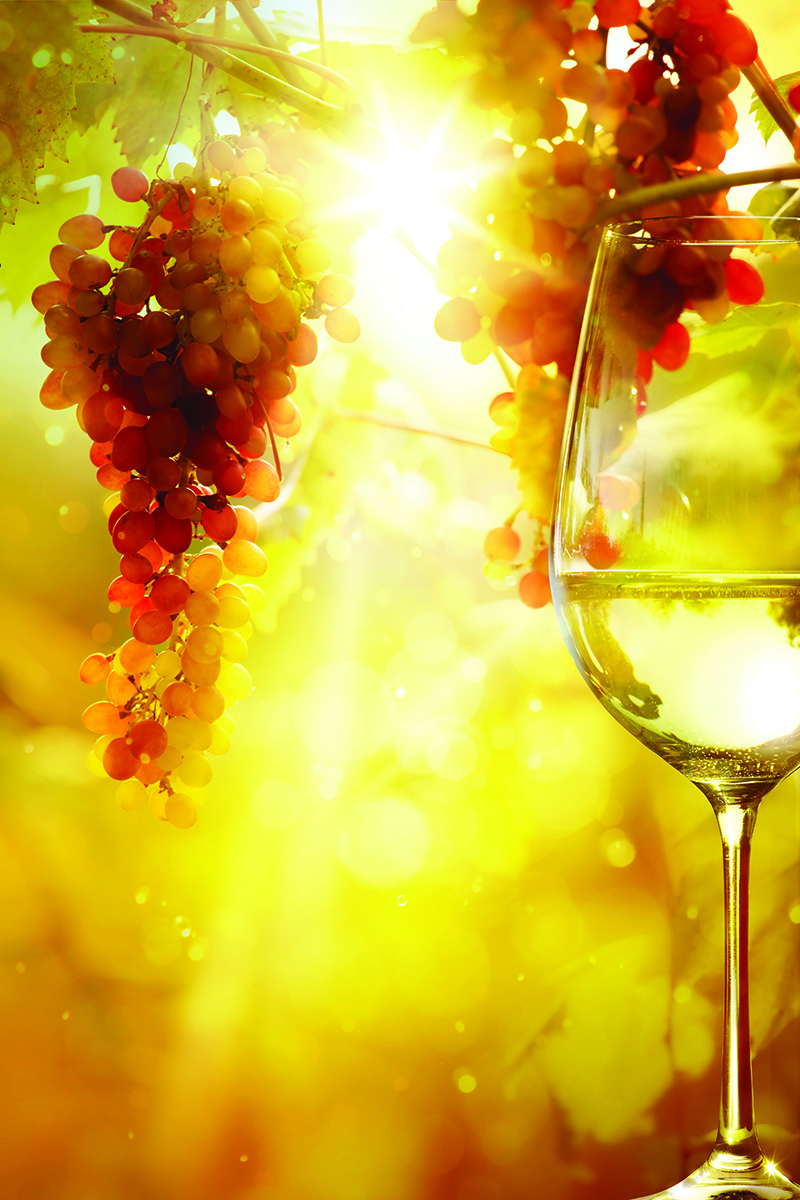 Why not try some of the locally made wine - you won't be disappointed!

Of course, we’re bypassing Assisi here, the birthplace of St Francis and a magnet for tourism. That’s exactly what we mean to do, in this unhurried look at Umbria, where Italian tradition, food, customs and daily life tick by without the coach crowds that flock to Assisi’s many attractions. Spello is a walled town with Roman roots and its pace is dictated not by umbrella-wielding guides and tight sightseeing schedules, but by the dawdling ding-dong of church bells and the steady click-clack of knitting needles, as locals spend a productive afternoon in the sun. It isn’t a tourist town, though there’s enough to fill a day in Spello. 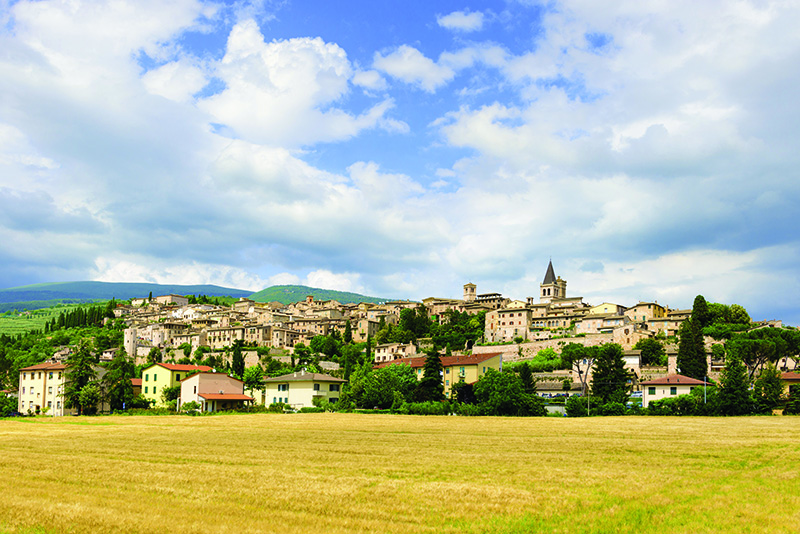 Spello is a Roman-walled town offering the visitor all the curiosities of it's history, together with panoramic views.

The church of Santa Maria Maggiore houses an absorbing fresco cycle, while the streets are made for simply walking, understanding and smiling. If you want more of a hike, the Olive Grove Path runs by Spello on its long, winding and sometimes hilly route between Spoleto and Assisi. While it’s certainly not the fastest or most convenient way to visit Assisi from Spello, it is certainly a bracing adventure into the spellbinding landscapes of this ancient land. 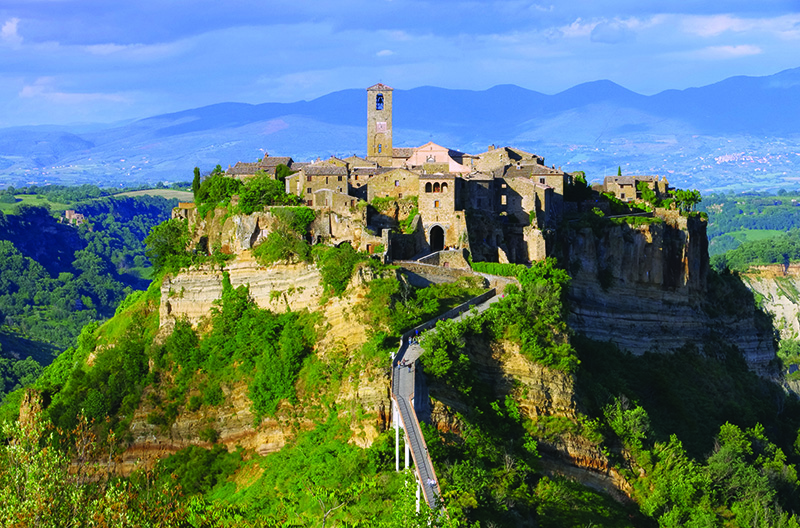 Orvieto's streets are as spellbinding as it's stunning setting, perched on it's rocky throne.

At just 90 minutes by road from Perugia and Spello and 35 minutes from Ficulle, Orvieto has the power to take your breath before you even set foot in the city’s streets. Perched high on an isolated slab of volcanic rock, like a king on his throne, the dramatic setting of ageless Orvieto is a sign of good things to come.

From afar, and indeed, up close, the cityscape is dominated by the cathedral. For hundreds of years, the intricate Gothic face of the Duomo has lured dedicated worshippers and travellers through its giant bronze doors and into the cool, light-scattered interior of this religious treasure, where painted angels linger on the ceiling. The quiet off-season period is a great time to give this masterpiece the calm reverence it demands. Beneath Orvieto's enchanting streets are caves and tunnels that once served as wartime escape routes. take a guided tour to explore the town's underground world!

The art-laden Palazzi Papali is another attraction worth seeing during a winter visit. Much like every other town and city in Umbria, pleasure stems from the simplest of things, such as strolling after dark in medieval lanes and finding a bar to enjoy a glass of exquisite Orvieto Classico wine. Heating up the cooler months is the Umbria Jazz Winter Festival, which runs in Orvieto from late December into early January. Top global performers and fans of this toe-tapping musical style get to enjoy a series of concerts in some of Orvieto’s most visually stunning venues. These attractions, plus the many walking tours and opportunities to purchase crafts from local artisans, only scratch the surface of Orvieto. Beneath the streets are caves and tunnels that served as siege-time escape routes or simply a place to keep pigeons! Join a guided tour to delve deep into the rich, story-filled and ever surprising fabric of this glorious part of Italy.

If you would like to make Italy your next holiday destination, there are plenty of options. Click on the RCI Resort Directory button below to select your accommodation.

If you own timeshare but are not a member of RCI, you can join our holiday exchange community today. Click on the Join RCI button below and sign up in a few simple steps.

Three European Destinations For Your Next Holiday

The Romance Of Italian Wines