Rich in culture, literature, architecture and more, the historic city of Edinburgh is one of Scotland’s most loved locations. It's also home to the Edinburgh Festival Fringe, the world's biggest arts festival, which sees up and coming artists alongside household names descend on Scotland's capital city every August. This year looks to be as fabulous as ever. 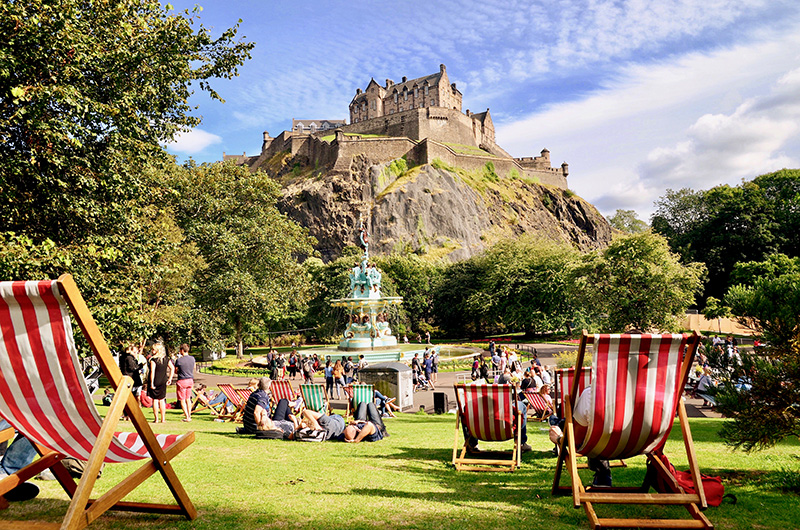 There's lots to see and do in Edinburgh, especially during the Fringe, so take some time to sit and relax in one of the parks and enjoy the views of the famous Edinburgh Castle.

Situated on the east coast of the country on the estuary of the River Forth, Edinburgh has been the Scottish capital since the 15th century and is home to two distinct world heritage sites: the Old Town, featuring the famous Edinburgh Castle, and neoclassical New Town. From ghost tours and whisky tasting to hiking and galleries, Edinburgh has it all and is easily accessible via plane, train and automobile.

The winding cobbled streets and rugged, hilly terrain have long been drawing in visitors from far and wide and never more so than in the month of August, when the biggest arts festival in the world sets up home in the city. The Edinburgh Festival Fringe is on from 2-26 August and is a one of a kind experience where days seamlessly turn to night to the sounds of laughter, fun and a buzz of anticipation for the next dramatic discovery.

The Fringe is a must-visit event for anyone who loves to be entertained. This is the ultimate time to visit Edinburgh and experience the city come alive with all things theatrical. 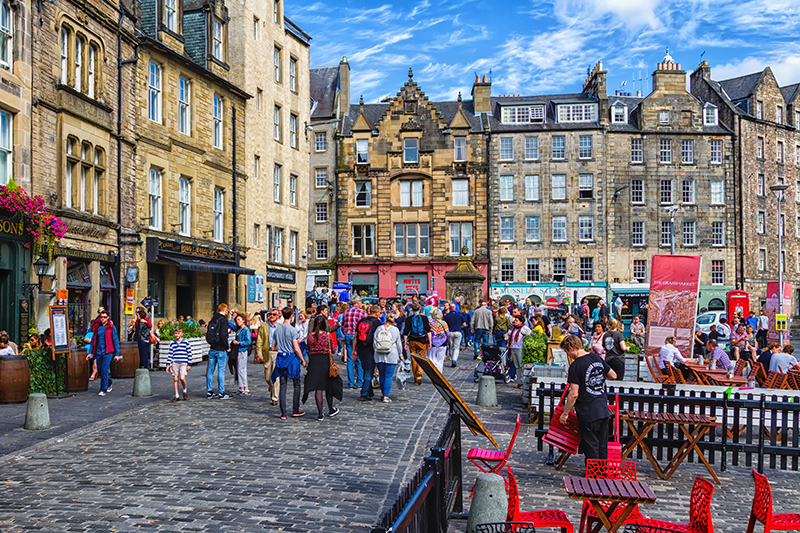 Edinburgh is full of winding, cobbled streets with plenty of shops so you can enjoy some retail therapy.

The Edinburgh Festival Fringe is an open access arts festival, the largest event of its kind in the world. It began in 1947 when eight theatre companies turned up, uninvited, alongside the acts performing in the first Edinburgh International Festival. As an open access arts festival, anyone who can find a venue to perform in can put on a show as part of the Fringe. There is no selection process nor is the festival curated. The festival productions are all produced externally with the Edinburgh Festival Fringe Society offering to provide the companies with the resources, support and exposure necessary to make their show a success.

Performances pop up everywhere, from bars to street corners, and the magic of the Fringe is never knowing quite what’s round the corner. There are literally thousands of reasons to visit the Edinburgh Festival Fringe and finding the ideal balance between quantity and quality makes for the best experience.

From big names in the world of entertainment to unknown artists looking to build their careers, the festival caters for everyone and includes theatre, comedy, dance, physical theatre, circus, cabaret, children's shows, musicals, opera, music, spoken word, exhibitions and events - there really is something here for everyone. 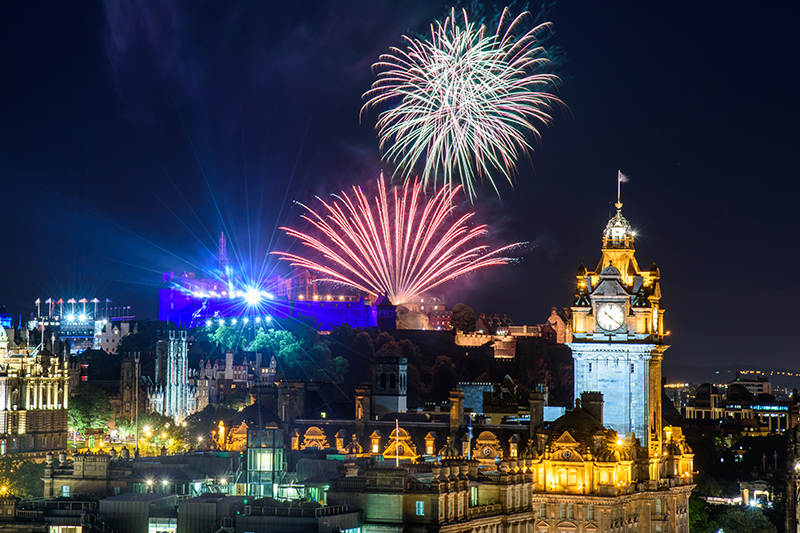 This year's Fringe comes to a close on 26 August with a spectacular firework display - not to be missed!

Many acts will perform for free during the festival in the hope of getting their work seen by the right people, or offer a donation-based ticket scheme to draw in the crowds. Competition is fierce and the days are long but the rewards can be fruitful and the atmosphere electric. There’s no business like show business, and for show business there’s no place quite like Edinburgh during the Fringe.

This year’s Fringe will feature work from artists across a record 63 countries, with 744 shows from Edinburgh and 943 from Scotland. With art always set to imitate life, festivalgoers can expect to see lots of response to Brexit, the Me Too movement, climate change and other current issues, such as rising rates of knife crime and gang culture. Gender equality is an ongoing struggle in theatre but expect to see more females than ever taking centre stage at the Fringe and firmly proving that equality in the theatre is a positive aspect and one which will continue to evolve. 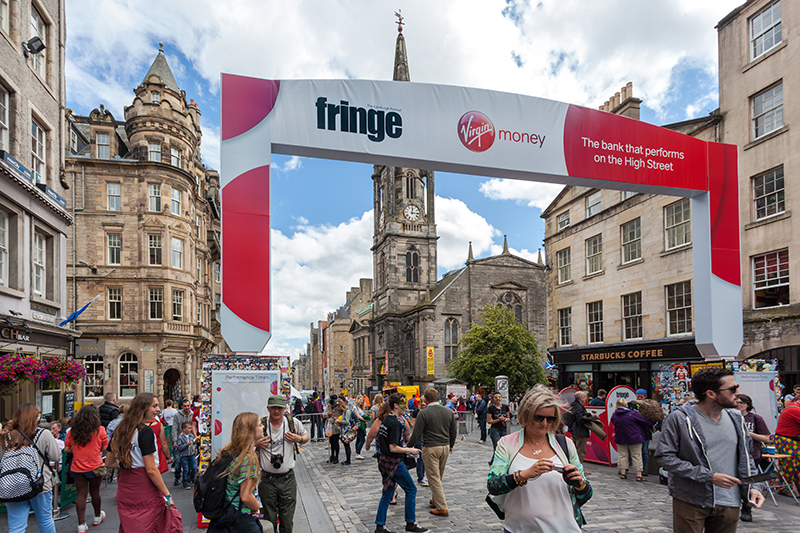 There will be an array of artists from all over the world who will take to the stage all over Edinburgh. Dance, theatre, music, exhibitions and more will be on offer.

The sheer amount of choice can be overwhelming but this year’s festival features new ways to explore more of the shows running throughout the month. The Inspiration Machine is an interactive, arcade-style machine that will randomly display videos from Fringe artists at the push of a button, helping audiences navigate their way through the festival programme. The Inspiration Machine will be located on the Mound throughout August as well as online so that Fringe-goers can discover all that the Fringe has to offer.

There are always free events taking place on The High Street and Mound Precinct that make for a perfect starting place for Fringe attendees. The 250 free shows a day will be staged by some of the world’s top street performers, suitable for all the family to enjoy. 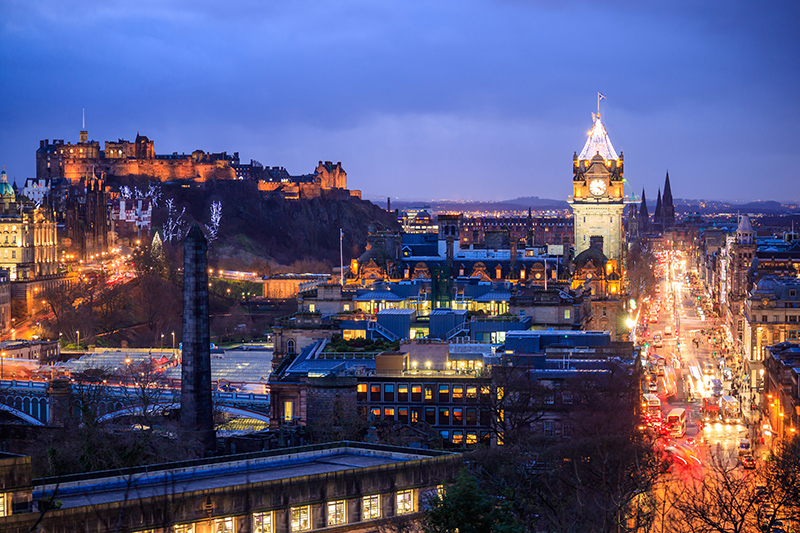 Edinburgh is a beautiful city, so make sure you have time for some sightseeing - as well as the fun of the Fringe Festival.

Edinburgh is the perfect place to experience the best of new British theatre, often before residencies are acquired in pricier cities, such as London. Last year’s royal rock musical Six has gone on to take the theatre-world by storm and the next success story is no doubt already waiting in the wings. For musicals of the parody kind, don’t miss Thrones! The Musical Parody. Winter may not be coming, but this Game Of Thrones-inspired show will be arriving and playing at Assembly George Square throughout the Fringe.

Acclaimed British theatremakers, Paines Plough, return for their sixth Edinburgh summer with their popular Roundabout, taking up residency at Summerhall. Roundabout will host 11 shows a day for 27 days which equates to more than 270 productions. With an array of plays by some of the best new playwrights around, this is theatre not to be missed.

In more theatrical highlights, The National Theatre of Scotland will be staging two world premieres at the festival - Jackie Kay’s Red Dust Road, about growing up as a mixed-race adopted Scot, as well as Tim Crouch’s, Total Immediate Collective Imminent Terrestrial Salvation, a play about manipulation and truth in a co-production with the Royal Court. There’s always something worth seeing at Underbelly - the eye catching giant purple cow that's arguably the best looking pop up theatre around. Check out Abandoman and his The Road To Coachella show for some memorable musical comedy and BalletBoyz in their Edinburgh debut for an inspiring evening of dance. 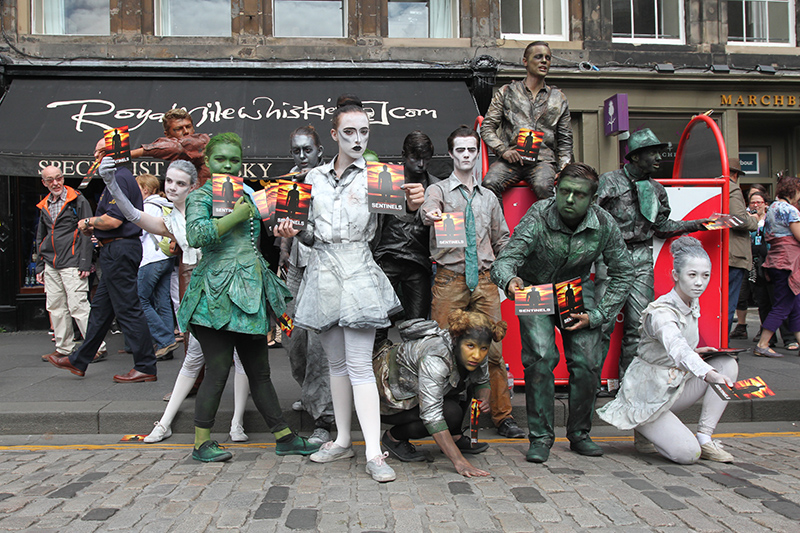 As you walk the streets of Edinburgh, you will come across many actors and performers who are often performing free of charge.

The home for comedians both establishing and rising, Edinburgh is the perfect place to take a chance on some new names, as well as trying to secure a ticket for some more familiar faces. A lot of the best Edinburgh experiences are the ones stumbled upon, rather than pre-planned, so a keen sense of adventure and willingness to embrace the unknown will often be rewarded with the most memorable moments… Or at the very least a good story to recount afterwards. 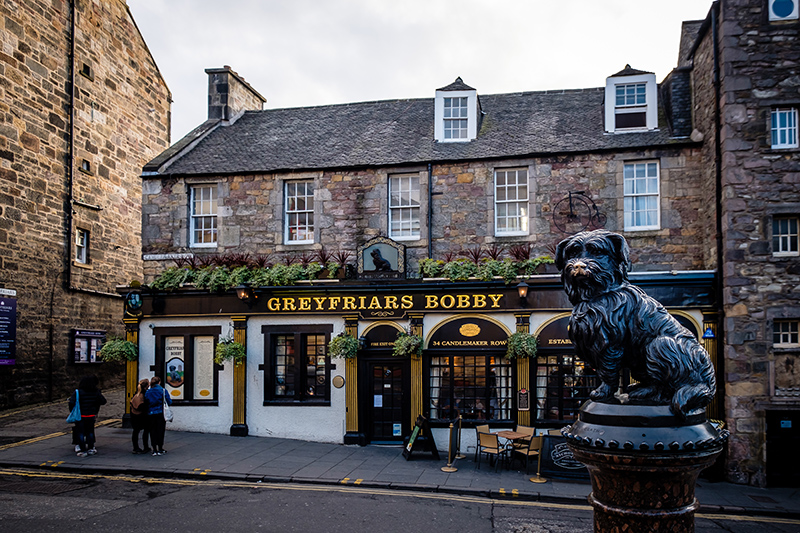 Why not take a pit stop at a local pub. There are plenty of old quaint pubs and restaurants to choose from in Scotland's capital city, so make sure you try some local dishes while you're there.

A visit to the Edinburgh Festival requires fuel and there’s no shortage of offerings when it comes to food in Edinburgh. From cheap eats to tasting menus, this is a city that really has it all. Priding themselves on using the best of local, Scottish ingredients, Angels with Bagpipes is a pleasingly named fine-dining restaurant conveniently located on The Royal Mile. Situated in a 17th century building, the two floors aim to showcase the best of the city’s defining features while serving up feasts to please the palate.

For a less authentically Scottish but ever-popular food type, head to Civerinos where mouth-watering pizzas are served alongside pastas and Italian-inspired sharing dishes. Aesthetically pleasing and budget friendly, this is perfect festival food. For something sweet, discover The Marshmallow Lady and her gourmet marshmallows and creative baked goods.

Naturally, there’s also many a bar waiting to be discovered in Edinburgh. For a drink with a view, head to Cold Town House, a bar spanning three levels with unrivalled views of Edinburgh Castle from its cosy roof terrace. Wrap up with a blanket - it is Scotland after all, and watch the world below go by with one of their signature craft beers. Try some local whisky in one of the city’s many pub hideaways or check out the Edinburgh Gin stills at Heads & Tales, whilst sipping on a carefully created cocktail. 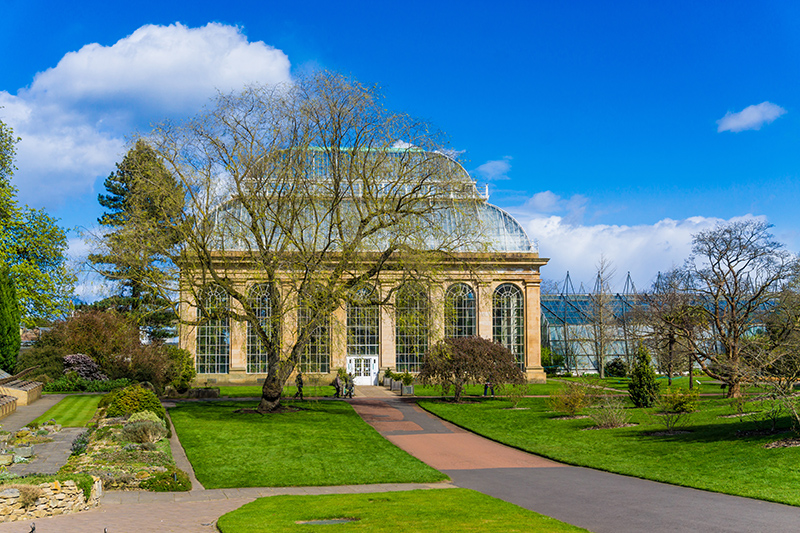 Venture a short way from the city to the Royal Botanic Garden of Edinburgh for a bit of peace and quiet. Explore the 70 acres of plants and glass houses full of exotic plants and flowers.

The centre of Edinburgh is full of shops but for a more boutique experience, venture to the nearby Stockbridge area. St Stephen Street is home to an array of independent traders with local café culture thriving and just asking to be utilised when it’s time for a refuel. Stockbridge and its quaint, village vibe makes for ideal exploration; there are plenty of green spaces to be found alongside the Water of Leith and the Royal Botanic Garden of Edinburgh is also close by. The local Stockbridge food market runs on Sundays, offering lots of local produce and street food. 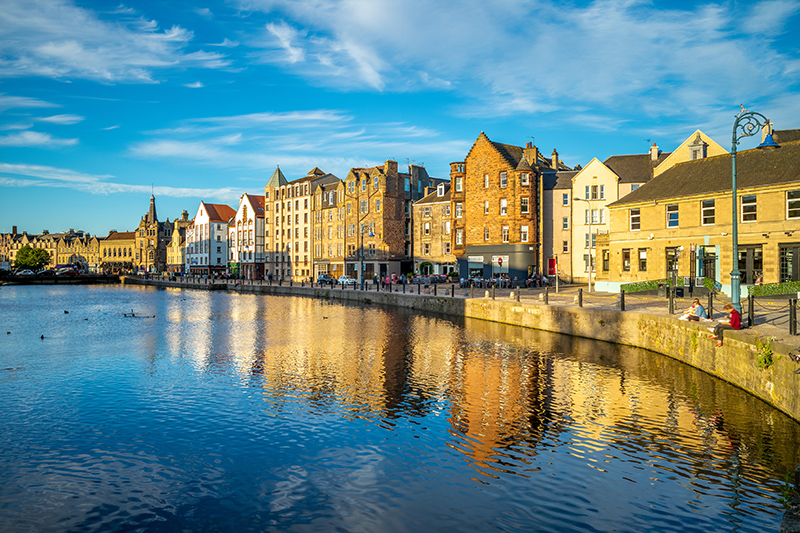 Visit the independent shops, close to the Water of Leith. Take a stroll along the river to take in the beautiful surroundings, before returning to the city centre and all the festival has to offer.

No trip to Edinburgh is complete without taking in the views and the best views around are to be found at Arthur’s Seat - an ancient volcano that provides excellent 360-degree city panoramas. Situated in Holyrood Park, the peak sits 251m above sea level and a roundtrip hike should take you a couple of hours. The walk is an easy enough one (especially on the way down) and a great way to work up an appetite for more of Edinburgh’s tempting gastronomic scene.

A perfect city break all year round, the magic of Edinburgh is truly tangible come August. Whether you’re a first time Festival Fringe attendee or a repeat visitor, the Scottish capital is guaranteed to capture hearts and minds alike. 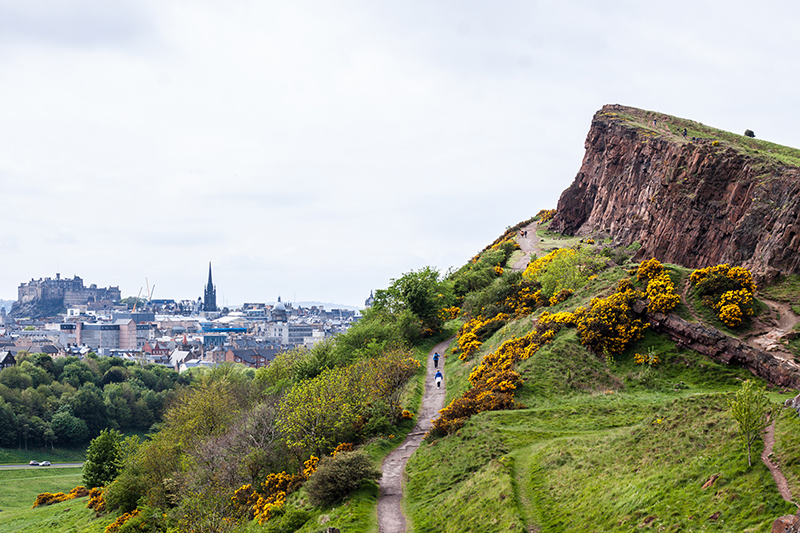 To take a break from the city, go for a hike to Arthur's Seat and appreciate the incredible vistas across Edinburgh.

If you would like to visit any of the destinations highlighted, or see where else your RCI membership could take you, click on the RCI Resort Directory below to search for your home-from-home accommodation.

If you own timeshare but are not a member of RCI, you could become part of our holiday exchange community today. Click on the Join RCI button below to sign up in just a few simple steps.

Spring Has Sprung: Festivals From Around The World