Whistler For Summer Holidays In Canada

Canada’s great outdoors is breathtaking, in every possible sense of the word, at Whistler. When the snow melts, this live wire of an alpine village ramps up the action. Whether you’re thrashing along foaming rapids, tearing down Whistler Mountain on a bike, as a black bear slinks out of the forest below, or cresting a summit with the Canadian Coast Mountains on the horizon, here thrills are many and nature works on a truly epic scale.

Listen carefully as you wander through flower-dotted meadows on Whistler and Blackcomb Mountains in summer, and you might well hear the shrill whistle of marmots, the furry, burrowing rodents that gave this British Columbian town its name. Ski tourism first arrived in the 1960s, however, long before skiers cruised these slopes, people were coming here in the summer for the good, fresh mountain air, activities and the prolific wildlife. 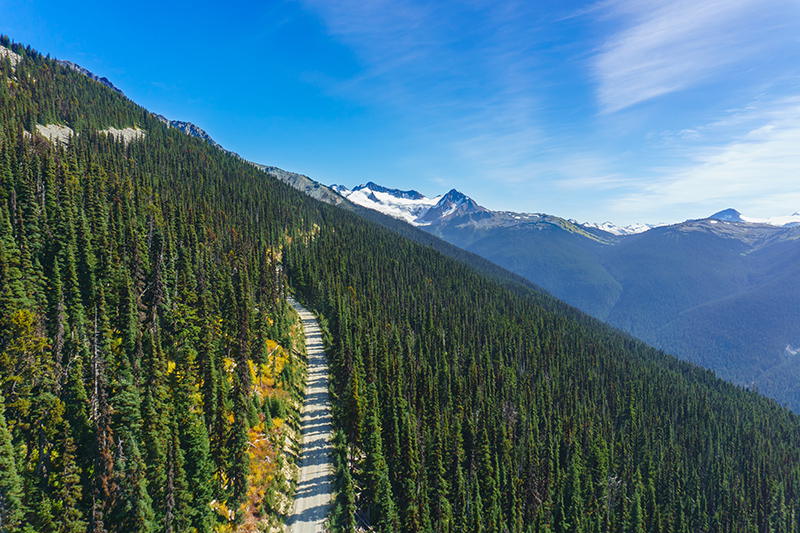 Canada is the place to be if you love the outdoors. Take in the stunning views of the Blackcomb Mountain, with its beautiful, fragrant pine trees and snow-topped mountains as a backdrop.

Still today, summer visitors outnumber those in winter. They wax lyrical about the long days and wide-open skies, which are perfect for world-class mountain biking and tranquil backcountry hiking. Jewel-coloured lakes, and adrenaline sports, such as ziplining, rock climbing and glacier skiing - not to mention the occasional glimpse of a bear, moose or elk - are also big attractions.

Straight in at the top

Whistler is a tale of two imposing mountains: Whistler Mountain at 2,181 metres, and the glacier-encrusted Blackcomb Mountain at 2,436 metres. Straddling both is the Peak 2 Peak Gondola, the world’s second longest free-span cable car, which drifts up the scenic peaks in just 11 minutes. For a bird’s-eye view of the forest, crags, and perhaps the odd lolloping bear far below, try to snag one of two glass-bottom gondolas. At the top, arresting 360-degree views of the rippling Coast Mountains open up. 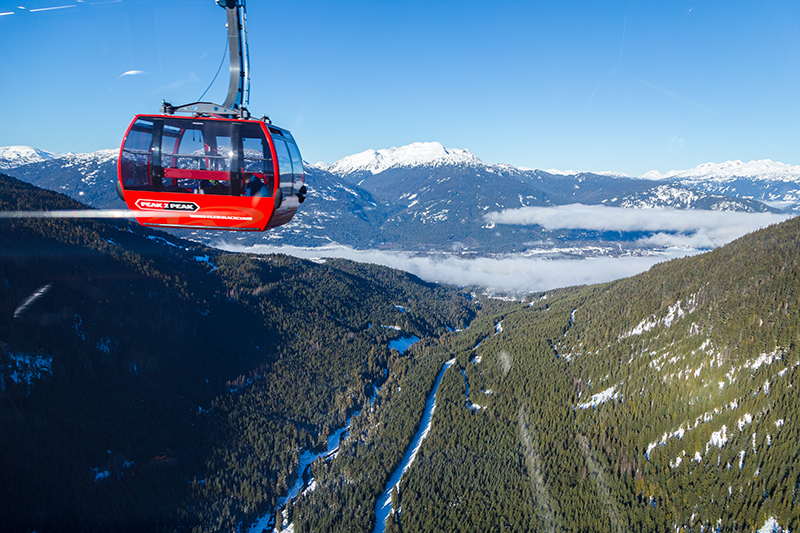 Soak up the views by taking a trip on the Peak 2 Peak Gondola. The views are magnificent during this cable car thrill ride!.

Whistler Mountain is the trailhead for some 31 miles of hiking, walking and running trails. If you do nothing else, be sure to make the short 10-minute walk from the Roundhouse Lodge to the chairlift that swings up to the summit and the new Cloudraker Skybridge. It’s quite something to walk across this 130-metre suspension bridge, vertiginously slung between Whistler Mountain and West Ridge, which towers 2,195 metres above sea level. From the adjacent Raven’s Eye Cliff Walk, a cantilevered viewing platform, you can peer out over the cliff’s edge and into the void of the Whistler Bowl. 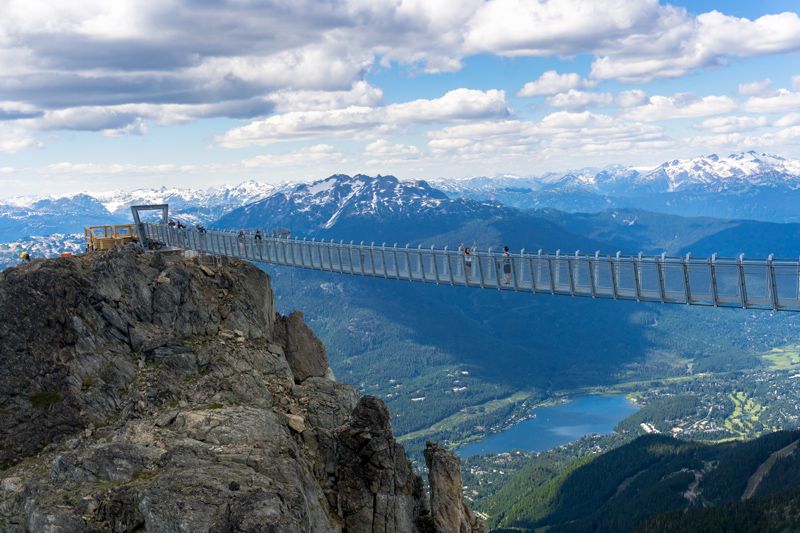 When it comes to mountain biking, British Columbia quite literally reinvented the wheel with its own style of ‘North Shore’ riding on raised timber trails. Whistler is adventure central, with what is widely considered to be the world’s greatest bike park (open mid-May to mid-October), with hundreds of miles of valley and singletrack trails powering through stunning mountainous terrain and thick pine forests. 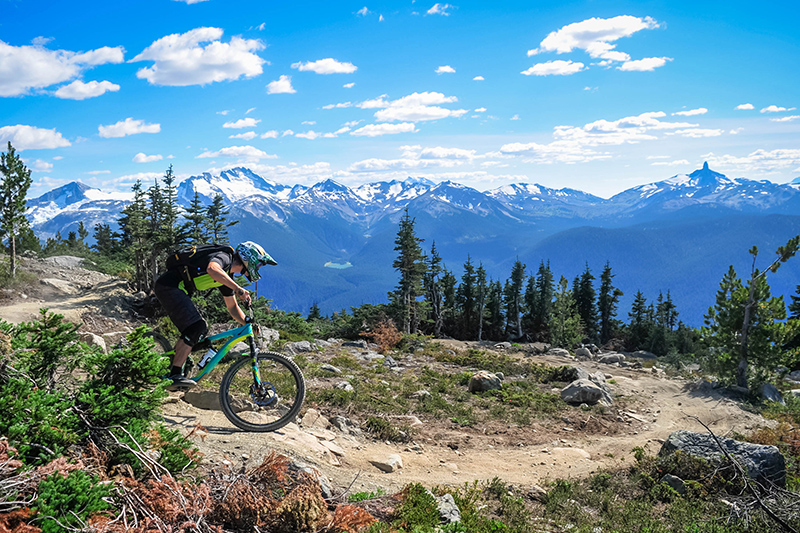 Love mountain biking? Then this is that special place for you. Bikers rave about riding here, in the highly challenging and magnificent surroundings. Watch out for any grizzly bears en route!

Bikers rave about the gravity-fed park at Whistler Mountain, which encompasses four mountain zones and 70 trails covering 50 miles, which are graded according to level: from easy green to technical blacks and jump trails. If you’re cutting your teeth, make for the confidence-building Fitzsimmons Zone, with its easy green and blue trails. The Garbanzo Zone offers more of a downhill buzz on steeper, more rugged terrain. And for serious bikers, the tough Top of the World Trail in the Peak Zone is a bone-rattling singletrack, with switchbacks, sweeping descents and out-of-this-world views of the granite peaks of the Coast Range.

In August each year, Crankworx draws professional bikers from across the globe, when its Freeride Mountain Bike World Tour comes to town. 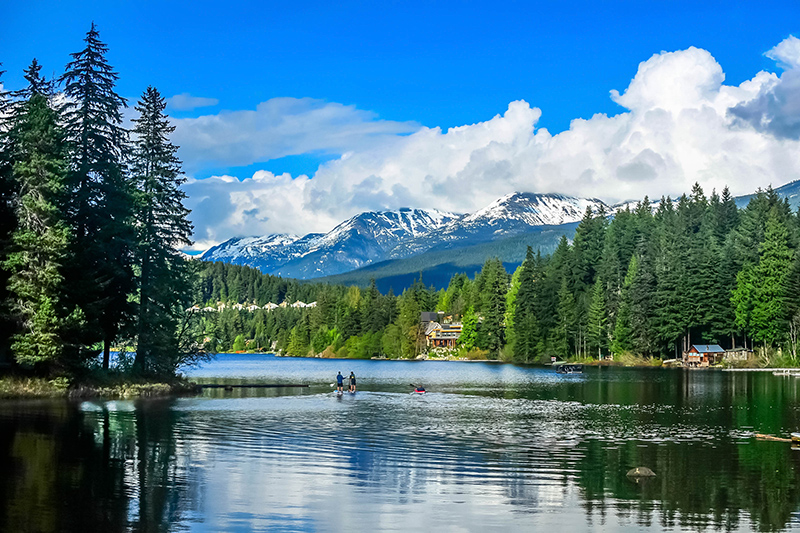 For a more laid back vibe, hire a canoe on one of the pristine lakes, overlooking Whistler Mountain, surrounded by the scented pine forests. 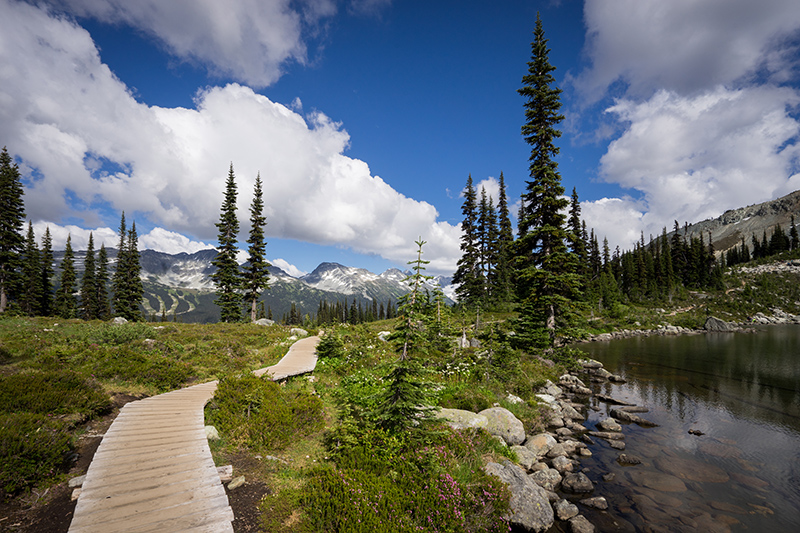 Many walkers come to Whistler purely to experience the High Note Trail, as it is one of the best hiking routes in the region.

Mountain-cradled Whistler is hiking heaven from June to September, with its phenomenal alpine backdrop of wildlife-filled forests, meadows, hanging lakes and glacier-capped peaks. These are best explored, some say, by slapping on a backpack and hitting the trails. Whistler Mountain itself has an enticing array of walking routes. If you only have time for one hike, make it the 5.8-mile High Note Trail. Starting at the Roundhouse Lodge, this spectacular half-day alpine traverse heads over the rolling summits of the Musical Bumps and affords arresting views of 2,319-metre Black Tusk, a jagged fang of volcanic rock rearing up above the Garibaldi Provincial Park, and vibrantly turquoise Cheakamus Lake. 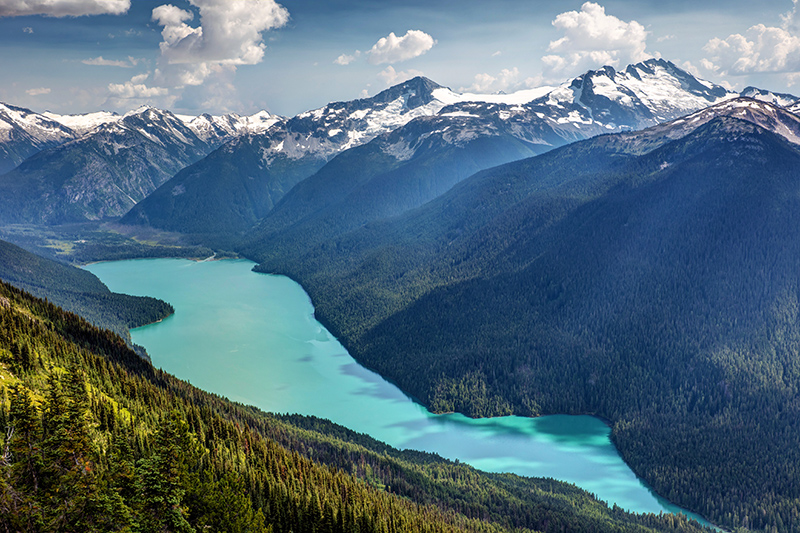 The High Note Trail offers the most scenic view of Cheakamus Lake in the Garibaldi Provincial Park.

If you’re up for trekking deeper into the backcountry, you can continue into Garibaldi Provincial Park. Here, the pristine alpine wilderness is a magnet for surefooted, map-savvy hikers. The centerpiece is Lake Garibaldi itself, a surreal blue lake, shimmering among dark, jagged, glacier-streaked peaks. The lake is a popular starting point for the 8.5-mile, out-and-back hike to the starkly eroded volcanic pinnacle of Black Tusk. 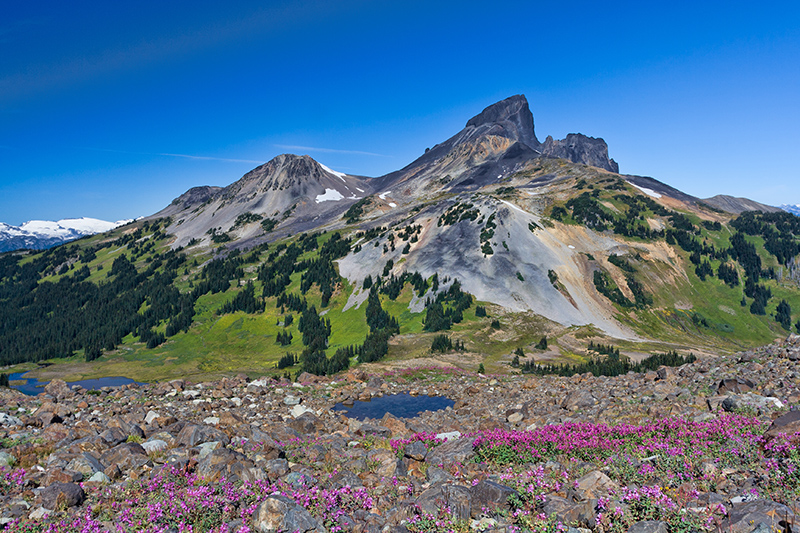 Parts of the High Note Trail are relatively flat and cling to the mountainside as you walk high above. Enjoy the fabulous views of the Cheakamus River below, and Black Tusk, surrounded by mountains across the valley.

Where the wild things are

This is the kind of big wilderness that only a country as vast as Canada can muster. And whether you’re hiking on a trail through forests of cedar and spruce, rattling downhill on a mountain bike, or paddling softly along a river in a canoe, you may well spot wildlife hanging out in these woods and rugged mountains, which are liberally sprinkled with elks, black bears, grizzlies, moose, deer, coyotes, marmots, cougars and wolves. At the top of many wish lists is getting to see one of the 60 black bears and their cubs that call the Whistler and Blackcomb Mountains home; spotting one in a forest glade, beside a lake or waterfall, is something special.

The natural surroundings of Whistler provide an ideal home for many different species of wildlife, including bears, cougars, deer, marmots, pika, hares, squirrels, chipmunks, otters, beavers and more. The marmot - a rock-dwelling rodent - is what gave Whistler its name.

To maximise chances of glimpsing bears during the season, from April to October, hook onto one of the daily bear viewing tours run by Whistler Discovery Tours. Led by eco guides, the two-and-a-half-hour 4x4 tours head through the coastal mountain range in search of these playful, yet elusive predators. Morning, afternoon and sunset tours are offered or, alternatively, you can opt for a moose excursion if you’d prefer to venture out in search of these hefty, goofy-faced deer. Another highly reputable company is Whistler Photo Safaris, where the expert guides happen to be professional photographers, so great bear shots are pretty much guaranteed.

Rolling on the river

One look at the thrashing rivers, swollen with glacial meltwater, and the turquoise-tinted lakes in Whistler’s backyard has adventure lovers itching to hit the water. Little beats the rush from a paddle-until-your-arms-ache whitewater rafting tour with a reputable operator, such as Wedge Rafting. Its fast-paced tours range from two-hour, family-friendly paddles on the Green River, with gentle bouncy rapids and splendid alpine views, to heart-pumping eight-hour escapades on the turbulent Elaho-Squamish River, where the Class 3 and 4 rapids bring you up close to the force of nature. 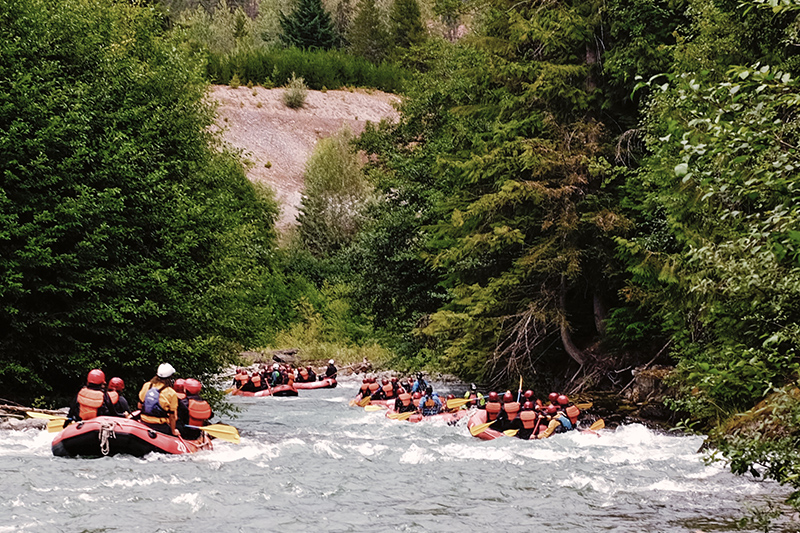 Join a white water rafting trip. They take you just north of Whistler Village to Green River, which provides the perfect combination of fun, bouncy rapids, and picturesque scenery for first-timers, or for those on a family adventure.

If you’d rather explore some of the rivers and lakes at your own pace, Whistler Eco Tours is the go-to outfit for renting out canoes, kayaks and stand-up paddleboards. In summer, it arranges paddle tours, including a three-hour tour that heads along the poetically named River of Golden Dreams to the glacial, aquamarine Green Lake. And if mastering the downward dog while afloat appeals, they offer hour-long SUP yoga classes on Alta Lake.

Whistler’s raging rivers, dense forests and craggy peaks create a dramatic backdrop for ziplining, where flying at speeds of over 60mph above sheer drops, with only a wire and harness to protect you, is as surreal as it is exhilarating. A company called Zip Trek strikes the balance between thrills and eco-sensitive tourism, with experiences which delve into beautiful old-growth temperate rainforest on a series of suspension bridges, suspended stairways, boardwalks and trails, best explored on the TreeTrek Canopy Walk, where knowledgeable guides give the inside scoop on the environment and wildlife. 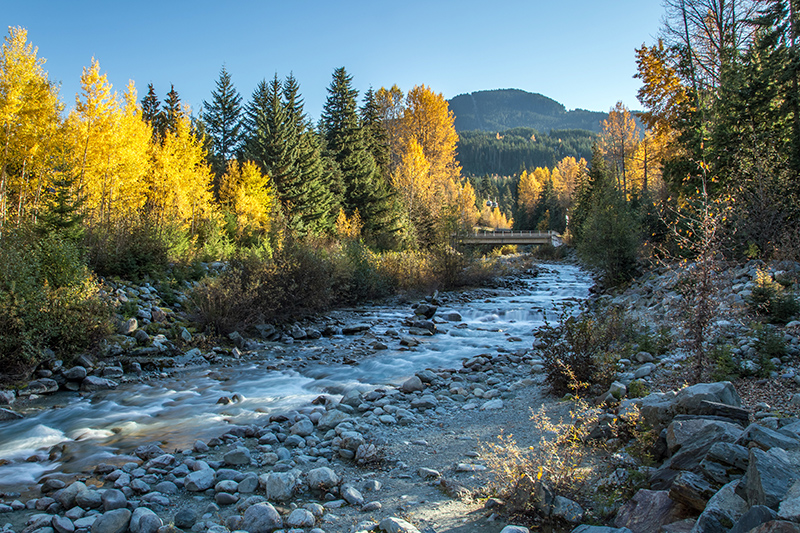 Listen to the rushing waters of Fitzsimmons Creek along the Fitzsimmons Trail. Check out the trees that have been used by bears as scratching posts.

More daring, of course, is testing your nerve on the ziplines themselves. The family-friendly Bear Tour is a terrific primer, bringing together five ziplines and four treetop bridges between Whistler and Blackcomb Mountains, with gasp-eliciting aerial views of Fitzsimmons Creek. The ultimate pulse-racer, however, is The Sasquatch, the longest zipline in Canada and the US: it's fast, more than a mile in length and affords gasp-out-loud views of the forest and river valley below.

If you want the buzz of climbing but with the knowledge you’re firmly attached to the rock face, then ferrate (fixed-rope trails) are the dream, and they are all the rage in Whistler, thanks to its decidedly rugged features. The Mountain Skills Academy is a brilliant first port of call for dabbling in the sport. Its two-hour introductory Sky Walk involves clipping onto a cable to traverse suspended bridges and cliff edges. The beginner tour at the top of the Sea To Sky Gondola, in nearby Squamish, is a high-altitude obstacle course of ladder-like rungs and suspension bridges, with dizzying views of ocean fjords and snowy peaks. 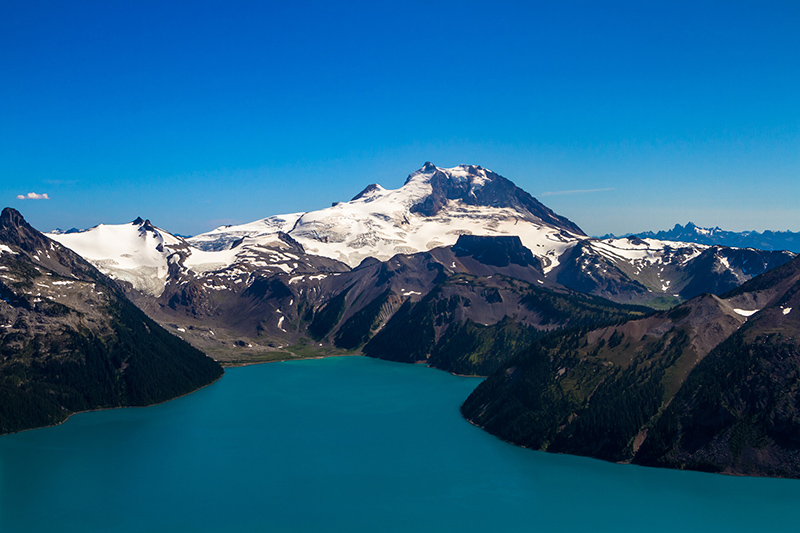 Beyond via ferrate, the academy also specialises in rock climbing - from half-day to full-day multi-pitch intermediate tours - and mountaineering. The latter includes the beginners’ half-day Whistler Peak Challenge, with hiking and some easy scrambling involved; a more challenging full-day ascent of Blackcomb, and a two-day ascent of the 2,678-metre Mount Garibaldi, with its staggering views of the Howe Sound. 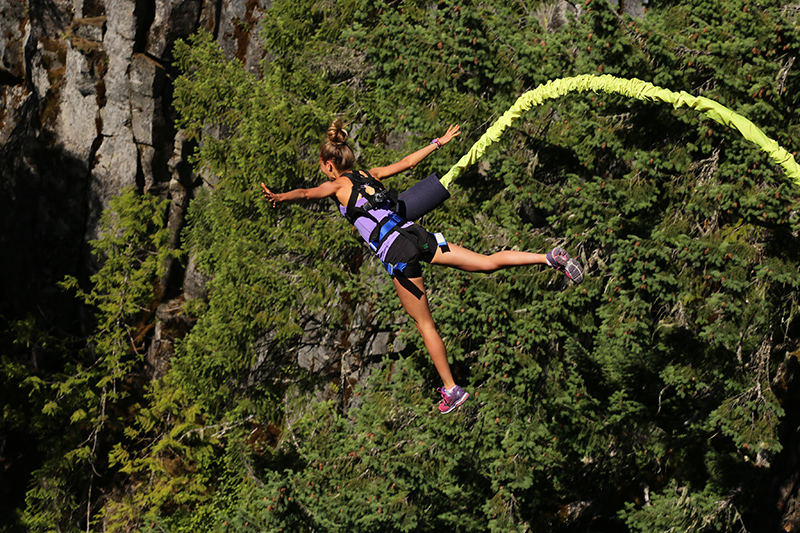 Try bungee jumping from a suspended bridge overlooking the beautiful Cheakamus River - if you dare!

* Summer skiing and craving snow? Ski or board in the sunshine on the Horstman Glacier on Blackcomb Mountain in summer.
* Bungee jumping - Feel the rush of leaping from a bridge suspended 50 metres above the glacial Cheakamus River.
* Glacier hiking - Cross glacial snow and ice, and venture into the Whistler Bowl on a short-roped mountaineering ascent.
* Fishing Tours - Go walk and wade fishing along rivers and creeks in search of salmon and trout.
* Quad Biking - Venture off road on rugged singletracks in Whistler’s alpine backcountry.

If you would like to make Canada your next holiday destination, there are plenty of options. Click on the RCI Resort Directory button below to select your accommodation. There are 112 resorts signed up to the RCI Exchange Holiday programme across Canada.

If you own timeshare but are not a member of RCI, you can join our holiday exchange community today to see more of the world in the comfort you have come to expect of timeshare accommodation. Click on the Join RCI button below to sign up in a few simple steps.

The Mountains Are Calling

Rocky Mountain Highs In The US National Parks

Where To See Autumn Colours On Holiday