Celebrating Sinterklaas In The Netherlands

The arrival of Sinterklaas means Christmas comes early in The Netherlands, making the country a great place to visit during the festive season.

“It’s Christmaaaasssss!!!” as Slade’s Noddy Holder is already reminding us - and to prove it, Santa Claus, or Sinterklaas, as he’s known across the North Sea, has already landed in The Netherlands. The character is based on a white-bearded, red-coat wearing 4th century bishop called Saint Nicholas (sound familiar?), and the Dutch celebrate Sinterklaas on the saint’s birthday of 6 December. Proceedings actually get under way the day before on Sinterklaas Eve (‘Sinterklaasavond’, also known as ‘pakjesavond’ or parcels evening), when shops shut early, families gather at home to sing festive songs and children put an empty shoe by the fireplace or on a windowsill hoping they’ll wake to find a gift inside the following morning. 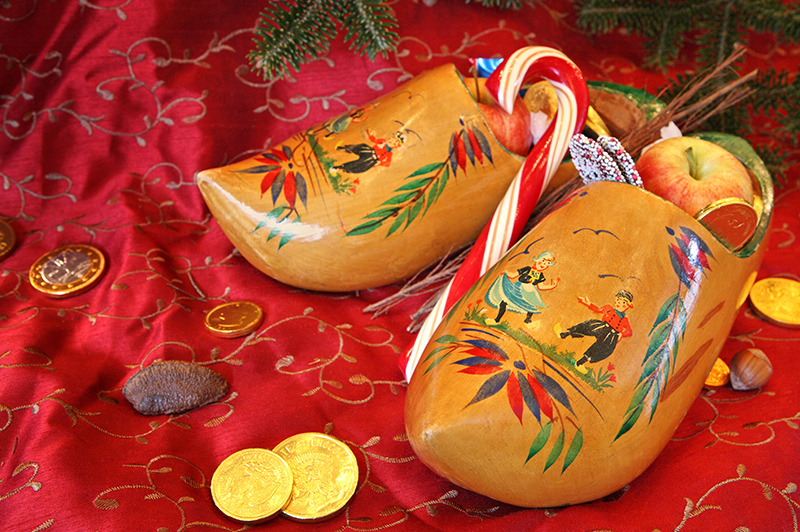 Children awake to find shoes stuffed with treats, such as chocolate coins, candy canes and apples that have been gifted by Sinterklaas.

Whether that Xbox they wanted will fit into a size 5 trainer is another matter of course, but the tradition extends to parties featuring special biscuits and cakes - including ‘pepernoot’, made with cinnamon and spices - and treasure hunt games where children follow clues to find the gifts that Sinterklaas has left. The clues often come wrapped in riddles and poems, and that theme continues the following day, when children take part in Secret Santa-style gift giving at school. This time the poems are wrapped in with the gifts, and give the recipient a clue as to who it’s from.

While all this is going on, Sinterklaas himself departs The Netherlands by steamboat from the Hook of Holland to travel back to Spain, from where he supposedly arrived three weeks earlier. His entry into the country always takes place on a Saturday and with a different disembarkation point every year - modes of transport have also included train, plane and even a hot-air balloon - to ensure everyone has a chance to get in on the action, which is also televised. 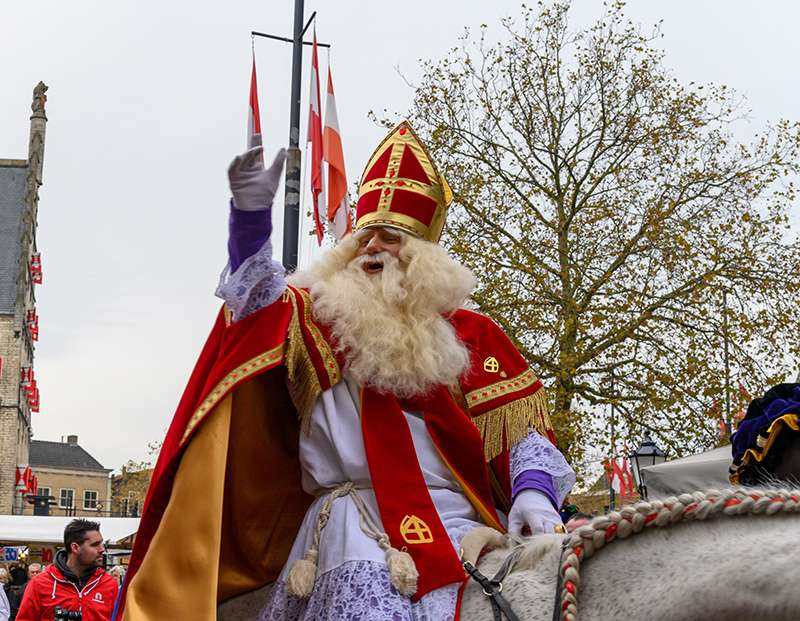 Sinterklaas arrives in style each year to excited crowds of children and adults alike. He's even been known to arrive by hot-air balloon!

Santa/Sinter’s arrival is a tradition that dates back nearly 150 years and pretty much heralds the start of the festive season, which is a particularly big deal in The Netherlands, and makes it a great place to visit at this time of year. Streets and shops are filled with the sights and sounds of the festive season, with lights, Christmas trees and festive music. Ice-skating rinks pop up on town squares and many towns and cities host traditional Christmas markets. Some of the best include:

• Amsterdam (13 - 26 Dec) - Located in the heart of the Dutch capital’s museum quarter, the Ice Village Christmas Market features an array of stalls and places to eat, and is even open on Christmas Day and Boxing Day for last minute - or late! - gifts. There’s also a skating rink at Ice Amsterdam, which stays open until 2 February.

• Maastricht (29 Nov - 31 Dec) - With an indoor skating rink, Ferris wheel and dozens of chalet-style stalls, ‘Magical Maastricht’ is packed with attractions and activities for a great day out.

• Amstelveen (7 Dec - 5 Jan) - One of the biggest Christmas markets in northern Holland, Winter Village Amstelveen is a cheery traditional market with stalls, a restaurant and a popular (and good value) ice-skating rink.

• Dordrecht (13 - 15 Dec) - A small city with a huge Christmas market, Dordrecht really comes to life during this popular three-day event, which features live concerts and hundreds of market stalls dotted around the historic city’s lanes and canals.

• The Hague (12 - 23 Dec) - Thousands of twinkling lights give the L-shaped Lange Voorhout, in The Hague’s old city centre, a lovely atmosphere during the Royal Christmas Fare, which features festive chalets, children’s market and a wide array of entertainment, including choirs, storytellers and theatre shows.

• Leiden (13 - 24 Dec) - Set on (yes, on!) the canals of the historic city, Floating Christmas Market Leiden has been a huge hit since first opening nine years ago, and this year will feature 75 wooden chalet-style stalls. as well as attractions including live shows, a floating ice rink and winter boat tour.

• Valkenburg (15 Nov - 29 Dec) - Possibly the best, and probably the best-known, of The Netherlands’ festive markets, Valkenburg Christmas Market mostly takes place underground, in the atmospheric caves beneath the city. The Municipal Caves and the Velvet Cave are the prime locations, but there are markets throughout, as well as above ground, where Santa’s Village and the Christmas Parade are especially popular with youngsters.

Festive markets and celebrations spring up all across The Netherlands at Christmastime. Enjoy traditional snacks, carol singing and even fairground rides!

The Christmas markets are an obvious must-see when visiting The Netherlands at this time of year, but the festive attractions don’t stop there. Here are a few other great family-friendly events worth checking out:

Amsterdam Light Festival (28 Nov - 19 Jan) - Since launching in 2012 this fantastic event has quickly become one of Europe’s leading light art festivals, with the city’s canals beautifully lit by more than 200 incredible innovative installations (try saying that quickly) from all over the world. You can enjoy it all on foot, bike or on a boat tour, where you’ll get an even better vantage point to see the lights reflected in the water.

Deventer’s Dickens Festival (14 - 15 Dec) - The eastern city of Deventer adds a new twist (sorry) to the traditional Christmas market scene by recreating the 19th century world of Charles Dickens in its historic town centre. An array of characters help to conjure up the spirit of Christmas past, so don’t be surprised to bump into the likes of Scrooge, Oliver Twist and Mr Pickwick, as well as carol singers, orphans, drunks, book-keepers and city gents, all dressed in period garb. There’s also festive food and drink, market stalls around Grote Kerk (the Great Church) and plenty of live music from choirs and orchestras.

Christmas in Oud Kampen (21 - 22 Dec) - The Dickens theme moves north to the lovely city of Kampen the following week, as the town centre plays host to a lively open-air theatre festival. As well as a selection of stage shows, you’ll spot costumed characters roaming the atmospheric streets of this picturesque town located along the River IJssel. The area around the IJsseldelta - which also includes the fellow Hanseatic towns of Zwolle and Hasselt - is known as ‘Holland in miniature’, and a terrific way to find out about its history it is to take a trip on a replica of the Medieval ship Kamper Kogge… just make sure you take a warm coat! 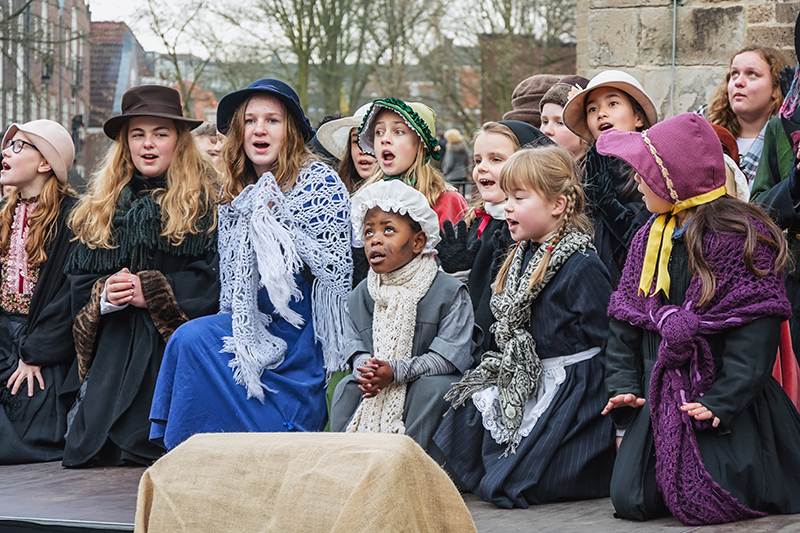 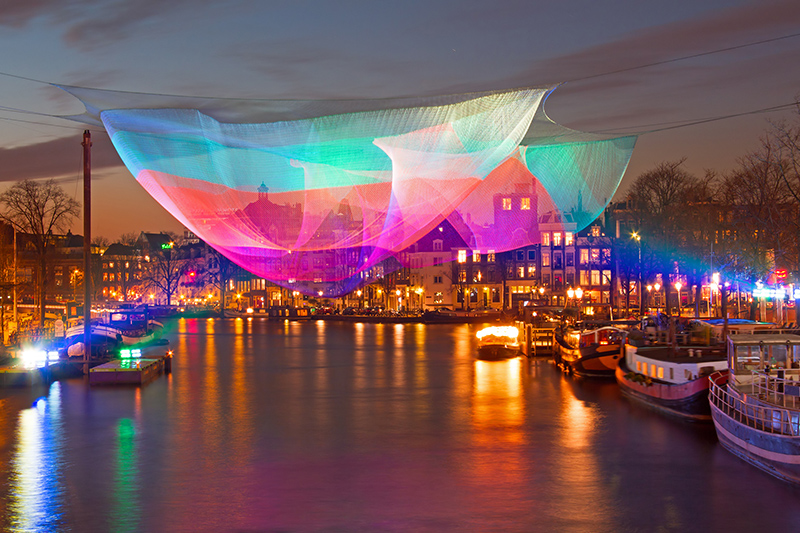 Marvel at millions of twinkling lights as they're reflected in the winding canals of Amsterdam, at the annual Amsterdam Light Festival.

You’ll need that winter coat for a trip to Finland too, and while you can see Santa Claus all-year-round - Rovaniemi in Lapland is home to both his workshop and the Santa Claus Village Christmas theme park, both of which are open 12 months of the year - there’s no better time to visit than the festive season.

The country has become an increasingly popular Christmas getaway destination in recent years, and while a festive atmosphere prevails throughout advent, the fun doesn't stop there, as 6 December is Independence Day in Finland, so its people have even more reason to enjoy themselves. The country declared its independence from the Russian Republic on this day in 1917, and while the occasion is marked by solemn events, such as patriotic marches, church services and tributes at war memorials and cemeteries, there’s plenty of celebrating too. You certainly won’t be able to escape the blue and white colours of the national flag, which not only adorn shops and businesses, but turn up on cakes, confectionery and even candles that many householders place in their windows. 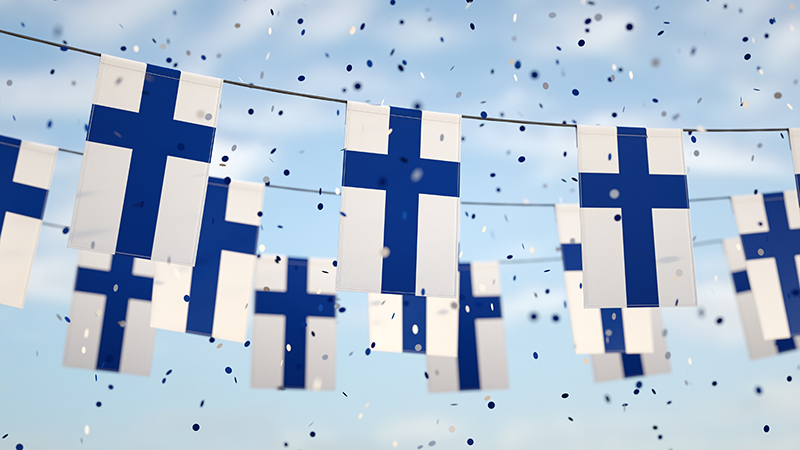 You'll be hard-pressed to miss the blue and white of the Finnish flag this 6 December, as Finns up and down the country celebrate Independence Day.

The chance to join the celebrations is a nice added bonus but there’s plenty to enjoy in Finland at this time of year, with a range of activities to justify its ‘winter wonderland’ tag. Finnish Lapland is an obvious focal point - and not just for the opportunity to meet Santa Claus in Rovaniemi. For starters there’s the nearby SantaPark, which puts a different slant on the amusement park scenario, not least because it’s built inside a cave and features an elf school and gingerbread baking classes, alongside the more typical games and rides. 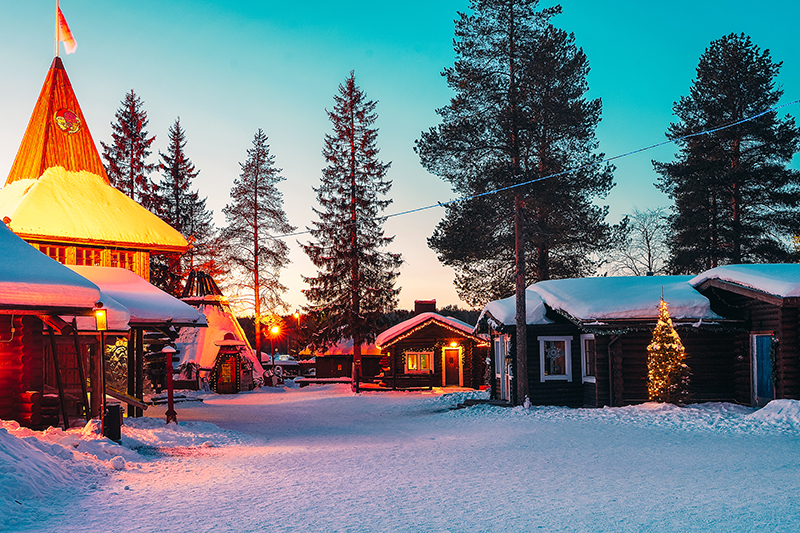 The snowy hometown of Santa Claus, Rovaniemi, in Finnish Lapland, is the original winter wonderland.

The chance to see the Northern Lights is an even greater thrill ride of course, and being this far north means there are better odds of glimpsing the fabulous phenomenon, while the snowy conditions also make Lapland perfect for everything, from skiing, snowmobiling and snowshoeing to dog sledding and ice fishing. You don’t even need a license to fish, as it’s very much seen as a public access right in Finland. 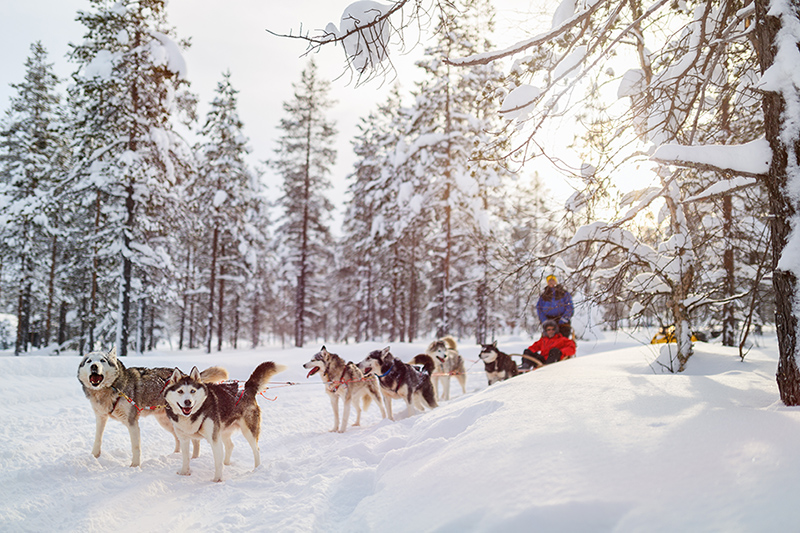 Why not experience the snow in thrilling style by whooshing along in a husky-drawn sled in Lapland?

There are similar wintry activities in the country’s Coast, Archipelago and Lakeside regions, where frozen waters bring opportunities for more ice fishing as well as ice-skating and kick sledging, which is like riding a scooter, but on ice. Some people will tell you it’s fun to take a dip in the icy waters that aren’t frozen, but that’s very much an acquired taste, although apparently invigorating after spending time in the sauna.

The latter is a way of life in Finland, and venturing into a sauna is almost a pre-requisite when visiting the country, as you’ll be immersing yourself in its culture as much as the steam. And don’t be intimidated by the notion of having to go nude - wearing a swimsuit or towel is perfectly acceptable, particularly in mixed-sex environments. 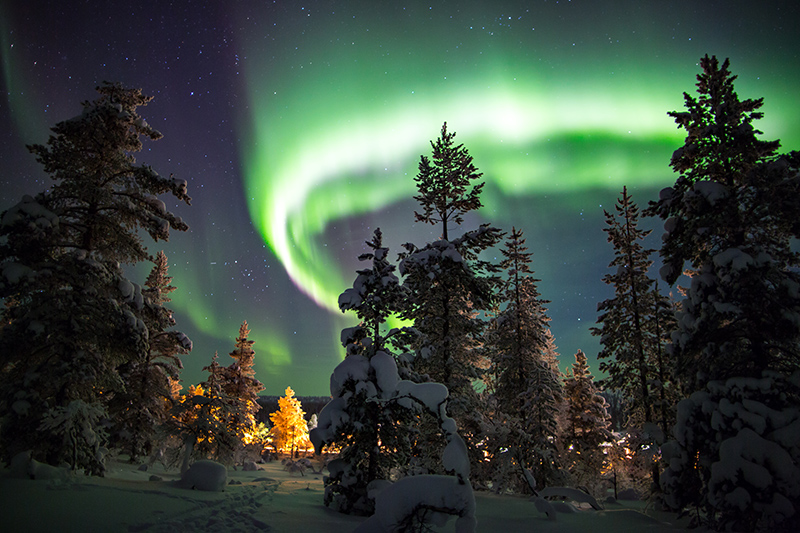 Snuggle up beneath a blanket and turn your gaze skywards to take in the glorious Aurora Borealis as it dances across the night sky.

There are a number of public saunas in the Finnish capital of Helsinki, which is a must-see if you’re in the country, and especially at this time of year. It’s earned the nickname ‘Christmas City’ due to the plethora of lights and decorations that adorn its streets and shop windows, as well as festive markets, ice-skating rinks, music and celebrations. The St Lucy’s Day Parade on 13 December is one of the biggest events, and sees a young girl crowned as the year’s chosen ‘St Lucia’ at Helsinki Cathedral before leading a parade through the city that attracts thousands of visitors. It might require a little standing round in the cold, but the cheery smiles from the friendly Finns, and the hot glögi, a traditional drink made from spiced wine, almonds and raisins (and sometimes vodka), will soon warm you up! 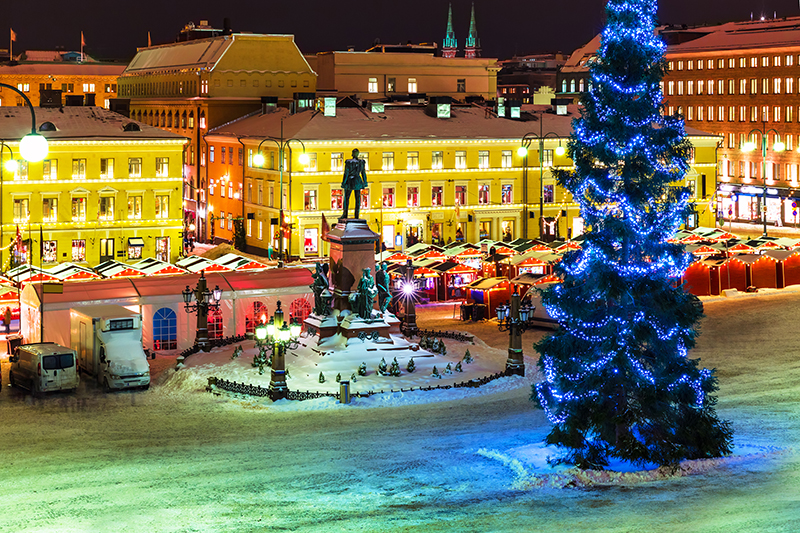 Helsinki, Finland, has earned the name 'Christmas City' thanks to its swathes of twinkling lights, ice rinks and jolly festive events at Christmas.

If you would like to visit one of these fantastic destinations at Christmas, click on the RCI Resort Directory below and search for your accommodation.

A Two-Centre Holiday in Finland

Set Sail with RCI Cruise°, in association with Cruise118.com