A zest for life and neon-bright beaches characterise much of the Caribbean, but Jamaica delivers a tropical holiday punch like no other.

There can be few better winter sun escapes than the Caribbean. If your intention is to fly and flop, Jamaica's Montego Bay should be your main base to relax, unwind and venture out for a little culture. 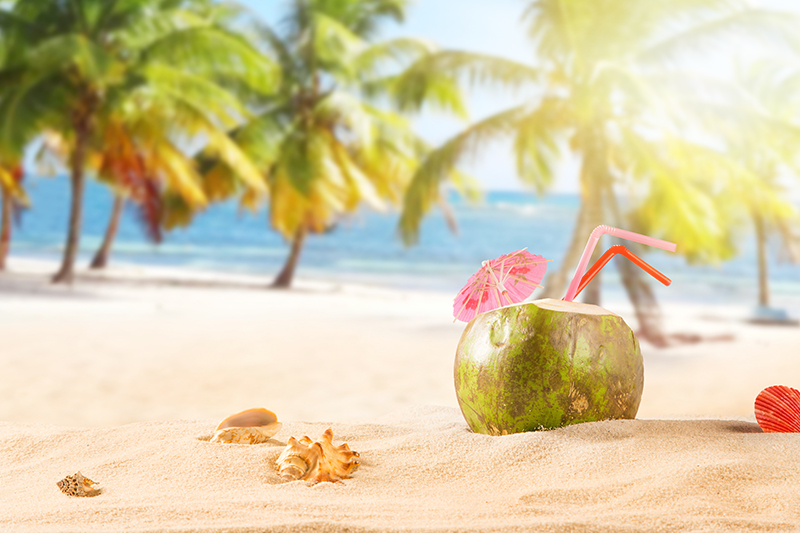 Jamaica's beautiful beaches are made for sitting back and relaxing with a long, cool, cocktail in hand.

The sheltered bay of Doctor’s Cave Beach attracts few tourists, except on Fridays in winter, when cruise ships dock in the harbour. Pick a spot to be dazzled by the blue waters and the pale sands, and you’ll soon be in a state of hypnotic bliss. It is worth the small charge of $6 to enjoy this private beach and its fully-stocked beach bar and grill.

After a few hours lounging, browse around the shops which conveniently overlook the beachfront. And when hunger strikes, the sunset patio at Margaritaville is a great vantage point from which to watch thrill-seekers plunge down the restaurant’s waterslide, while sampling the colourful cocktails. 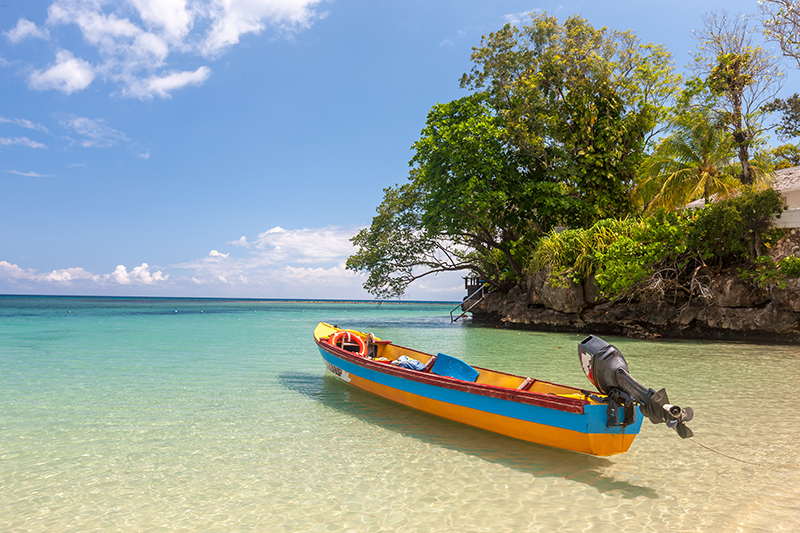 Paradise Beach is one of many idyllic sandy escapes in Jamaica that offer Caribbean holiday fun, both above and below the azure blue waters.

Doctor’s Cave Beach is a melting pot for tourists and Jamaicans alike, but you also have the option to go more local at Dead End Beach, beside Kent Road. Also known as Buccaneer Beach, this narrow strip of sand doesn’t have much in the way of commercial facilities, but the real treasure lies in its uninterrupted sunset views.

Both beaches are part of the protected waters maintained by the Montego Bay Marine Park, and part of a fabulous coastline from which to explore life beneath the waves, so bring your snorkelling gear to make the most of it. 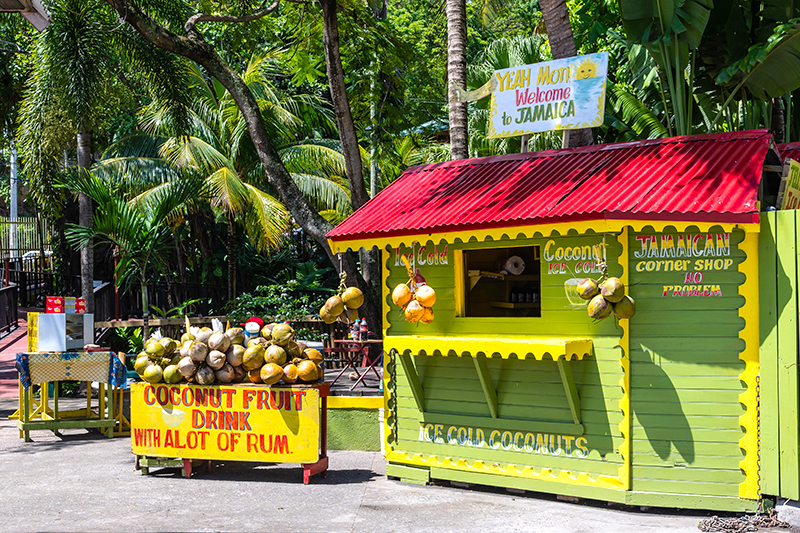 A Caribbean-colourful ice-cold coconut fruit drink and rum stall is a familiar sight on many of Jamaica's beaches, so you are never far away from a cooling drink on these hot sands.

If you’re not much of a beachgoer, you may want to head over to the southeast of the island to experience Blue Hole Mineral Spring. Take a long dip in the dazzling mineral waters, known for their therapeutic properties.

The cave spring sits seven metres below ground, and at its deepest, the cavern is approximately 10 metres. Chill out from the shallower sidelines and watch on as daredevils dive in. After all the excitement, book a Blue Hole Mineral Massage where a spa therapist will purify and exfoliate your skin - perfect after a few days basking under the sun. 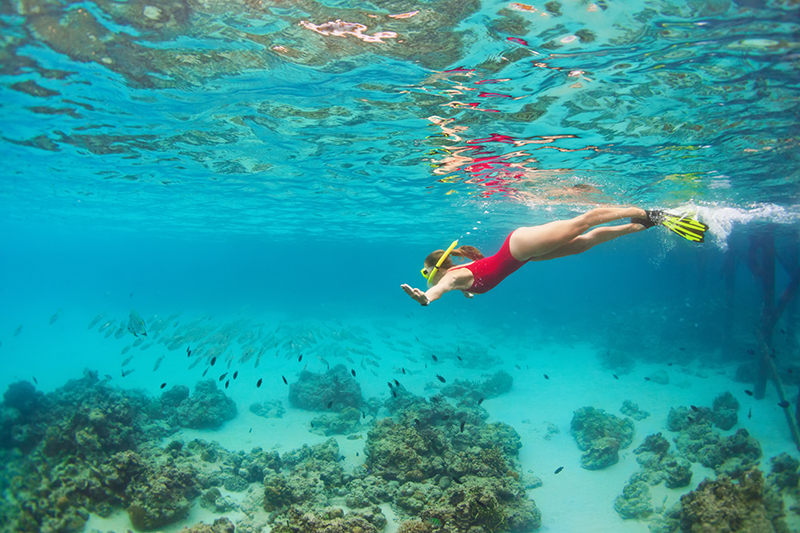 The Caribbean is blessed with beautifully clear waters of the bluest hues. You can take to the waters in the azure seas that wash the pale-sand beaches of Jamaica or, in the southeast of the island, take a plunge in the Blue Hole Mineral Spring and follow up with a massage treatment there to get your holiday body sun-ready.

A taste of the real Jamaica lies in its heritage. Bellefield Great House & Gardens is one of the nation’s oldest sugar plantations in the hills of Montego Bay. As you wander around the Great House and admire the sprawling gardens from the veranda, it will also unveil the contrasting lives of the estate owner and Jamaican planter as lived in the 18th century. Following the tour, a plantation lunch is served on the lawn with a sweet serenade from the estate’s Mento band.

For a taste of history and legend, Rose Hall Great House - also in Montego Bay - is a restored Jamaican-Georgian style mansion. The estate offers a tour and a museum which documents the slave history of the house, and the legend of the White Witch of Rose Hall. 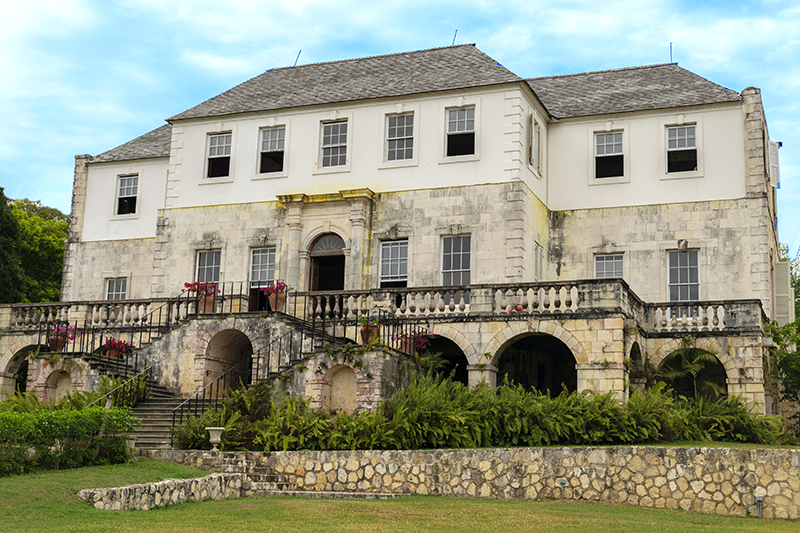 Rose Hall Great House in Montego Bay not only provides a history lesson, but also comes with its own White Witch legend.

It was rumoured that local White Witch, Annie Palmer, murdered three of her husbands here, and that she still haunts the property to this day. It was later discovered to be pure fiction, but the house continues to offer night tours focused on the legend, depicting a colourful story with inventive details of the locations of Annie's crimes.

On a cheerier note, the mansion is set on a hill with panoramic views of the sea. It’s the perfect spot to rest your legs and soak up the impressive views after touring the property. The grand entrance hall, main staircase and drawing room have all been tastefully restored by the owners with rich mahogany woods, printed silk wallpapers and ornamental chandeliers to complement some of the existing features. 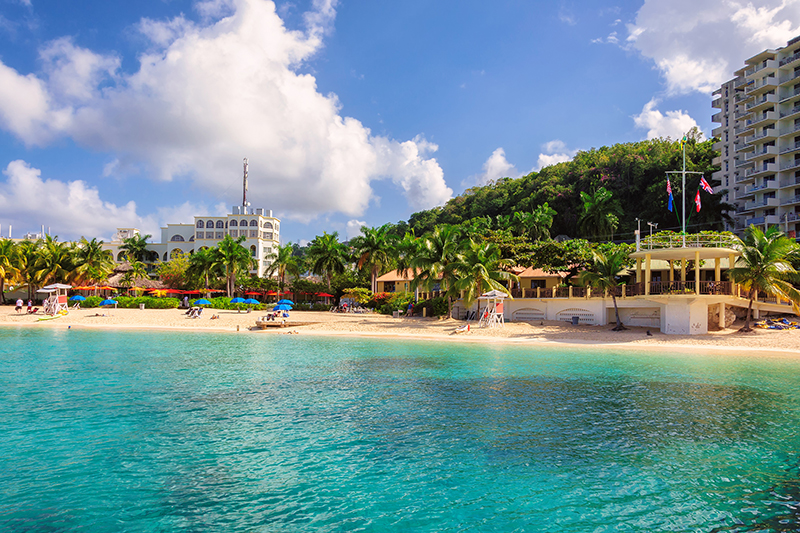 Montego Bay is a dreamy destination for those looking for a blissful beach escape, and yet its beautiful beaches fringe an island that is rich in culture, history and historic architecture, as well as offering its famed Jamaican cuisine for those who want to get a real taste of island life.

Interestingly, the White Witch legend seemed to have inspired Johnny Cash, who penned and recorded The Ballad of Annie Palmer in the early 1970s. The best-selling artist owned the nearby property, Cinnamon Hill Great House, which was a holiday home for Cash and his wife, June Carter, for over 40 years.

If you’re a fan of the late American singer, you can take a guided tour of the house, which remains preserved with the late couple’s furnishings, including personal family photos. Your guide will show you where Johnny used to play cards after breakfast, you can browse through his collection of books, and see where June loved to sew. 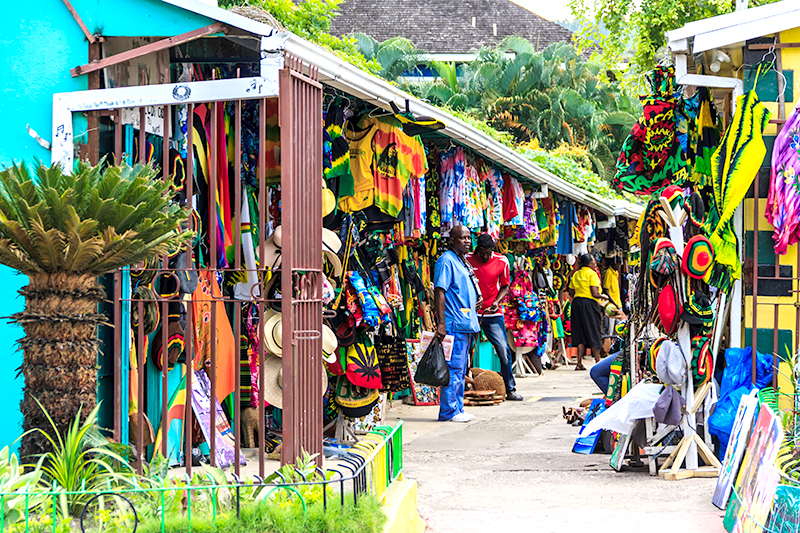 Jamaica is an island that, literally, bursts with colour, from its cocktails to the array of rainbow clothing lining its lively street markets.

You may prefer your music more upbeat and reggae than the sombre country notes. You are in Jamaica after all, and it would be verging on sacrilege not to visit the Bob Marley Museum, also the resting place of the talented pioneer of reggae.

It’s a two-hour scenic drive along the coast before diverting off inland to reach the Bob Marley Museum in Kingston. The musical attraction rests on the site of the musician’s former home, which he purchased in 1975, and was converted into a museum some time later by his wife, Rita. 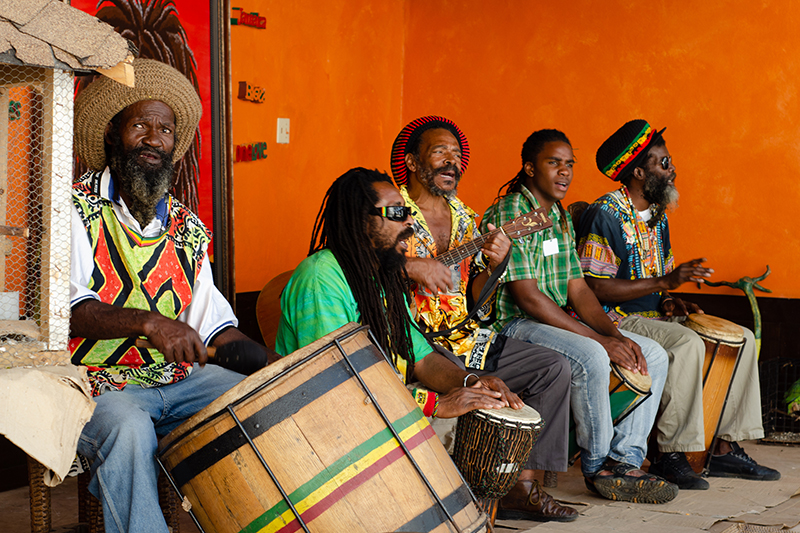 A tribute band welcomes tourists to the home of Bob Marley, where his former home is now a museum dedicated to his music and life on the island. Visitors are now able to view the home, pretty much as it was when the reggae legend lived there with his wife, Rita.

As well as displaying some of his treasures, the property also features an 80-seat theatre, a photo gallery, record shop and gift shop brimming with Marley memorabilia. You can also book the one-hour cultural tour, Making of the Music. Book the combo One Love tour so you can visit both in one day. Tours run Monday to Saturday, giving you a behind-the-scenes look at the recording process, from Marley’s rehearsals to album recordings, at the Tuff Gong recording studio.

The next day, it’s time to venture from musical history into the island’s political past. An important part of history awaits at Sam Sharpe Square, along Fort Street in Montego Bay.

The cobblestone square is named after national hero Right Excellent Samuel Sharpe, who famously led the Christmas Rebellion of 1831, urging slaves not to work on Christmas Day. This resulted in his execution, along with hundreds of slaves, but his bravery was posthumously recognised in 1975 with a title of honour. Today the square is a riot of colour and chaos, but Sharpe’s statue and ‘The Cage’, used to imprison slaves before auction, take you back to 18th-century life. 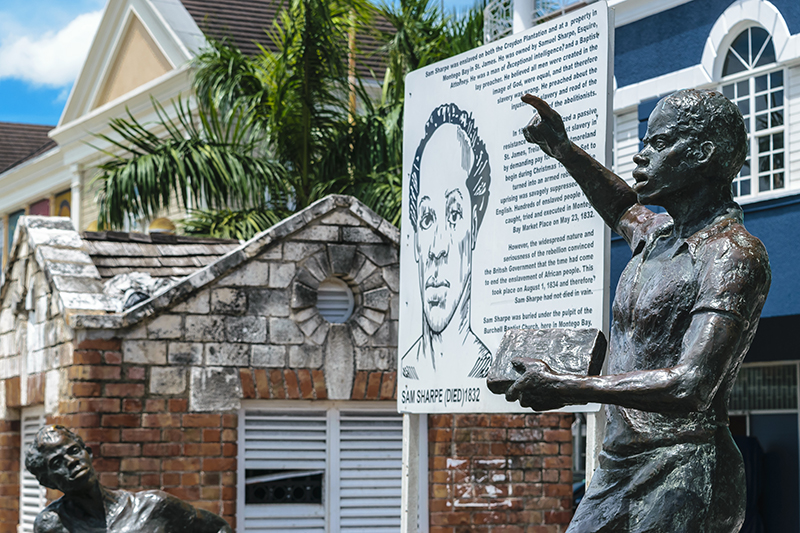 The statue of slave rebellion leader, Sam Sharpe, is a reminder of the island's darker past. His statue was erected, posthumously in 1975, in what is now called Sam Sharpe Square, to mark and honour his bravery.

After a week of adventures, it’s time to head inland for a little rum tipple, and the Appleton Estate, nestled in Nassau Valley should be your final stop.

Six varieties of rum are produced here, and the distillery is one of the few that claim a terroir. The site’s unique distillation and crafting methods have earned the estate's rum the accolade of being a rum with clear distinction. It’s one of the oldest sugar estates and distilleries in Jamaica, with more than 265 years' production under its belt, so you’re in for a real treat. 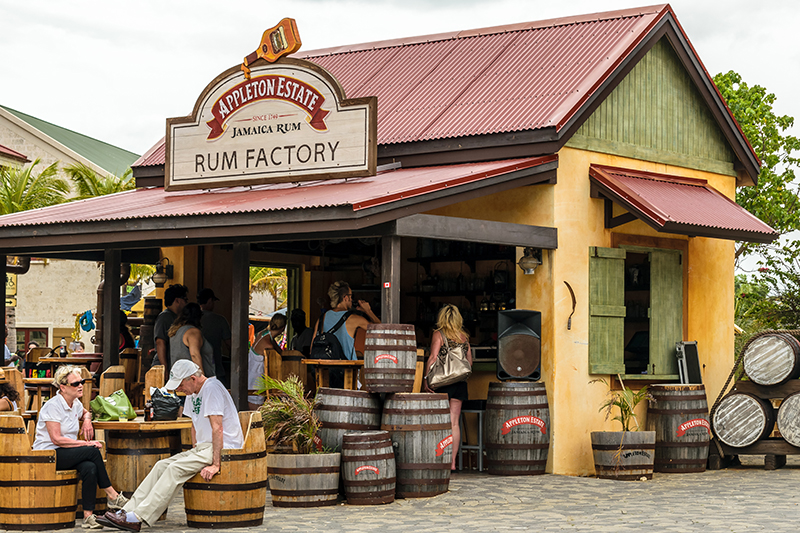 The Appleton Estate Rum Factory Bar is one of the best places to stop off to sample the island's famous tipple which, by virtue of having 265 years of production here, has earned it the accolade of serving a rum of clear distinction.

Book the Joy Spence Appleton Estate Rum Experience to sample some rum cocktails before an interactive tour with a rum expert. After trying out the original signature blend, finish up in the shop and treat yourself to a bottle of the 50-year Jamaica Independence Reserve for that special occasion, or simply toast to a holiday well spent.

If you are already an RCI member, you can use your membership to take advantage of staying in accommodation across more than 4,300 resorts in over 110 countries. Click on the RCI Resort Directory button below to see where you could be holidaying.

If you own timeshare, but are not yet a member of RCI, you can become part of our holiday exchange community today. By clicking on the Join RCI button below, you can sign up in just a few simple steps. Being able to swap your timeshare holiday home for other stays in so many exciting destinations across the world will give you the real value from your purchase of timeshare - it's all about opening up new travel opportunities for you and your family.

6 of The Best Caribbean Beaches

Drinks From Around The World