Scots people the world over, together with their family and friends, will be preparing for one of the party highlights of the Scottish events calendar this weekend, for Saturday, 25 January 2020 is Burns Night. Scottish poet, storyteller and lyricist, Robert Burns, became an international icon and now his birthday, 25 January, sees Scotland's national bard celebrated across the world, and here's how his life and work is remembered on this auspicious occasion.

The first Burns Night Supper was held in 1801, on the fifth anniversary of Robert Burns' death, inside the same tiny Ayrshire cottage in which he was born on 25 January, 1759. Known as the Ploughman Poet, Burns was the son of a tenant farmer whose life of hard labour and hardship saw him into an early grave as a pauper. This fired a sense of injustice in the young poet, and Burns first rose to fame as a bitter satirist and rebel, railing against all forms of politics and religion which he saw as fuelling inhumanity to man.

Robert Burns started life as a young rebel and, after becoming the national bard of Scotland and a poet of international renown, the Ploughman Poet today has an international fan base who know him as 'Rabbie' and mark his birthday with a Burns Night feast every year. A product of the spectacular Ayrshire countryside in Scotland, in which he grew up, the words and wisdom of Rabbie Burns are now integral to Scottish culture and New Year's Eve parties the world over!

The young Rabbie grew up in a harsh farming community around the small village of Alloway where he was born, and in among some of the most magnificent of Scottish landscapes. Alloway is a pretty village set in the Ayrshire countryside, and Burns tells the story of the place, as it was back in the 18th century, in his epic poem, Tam o' Shanter, which captures life as it was lived in his day. Translated into modern English from his original, which is nigh on impossible to understand, he paints the picture of his birthplace and the folk who peopled its streets and taverns:

"When the peddler people leave the streets,
And thirsty neighbours, neighbours meet;
As market days are wearing late,
And folk begin to take the road home,
While we sit boozing strong ale,
And getting drunk and very happy,
We don't think of the long Scots miles,
The marshes, waters, steps and stiles,
That lie between us and our home."

It seems nothing much has changed over the centuries - we still like to lose ourselves in the pleasure of drinks with friends in our local after work, but unlike Tam in the poem, we no longer have to scramble onto a trusty steed to get home - we simply dial up an Uber! What has changed is that the village of Alloway has now become a place of pilgrimage for those who love the poetry of Robert Burns. You can visit the Robert Burns Birthplace Museum where you can view his manuscripts and other memorabilia, including a lock of his hair. A beautiful sight, and also featured in the poem, is the Brig o' Doon, a small bridge which curves over the River Doon and over which Tam makes his escape home on his trusty mare, Maggie, after a bawdy night out in the village tavern. 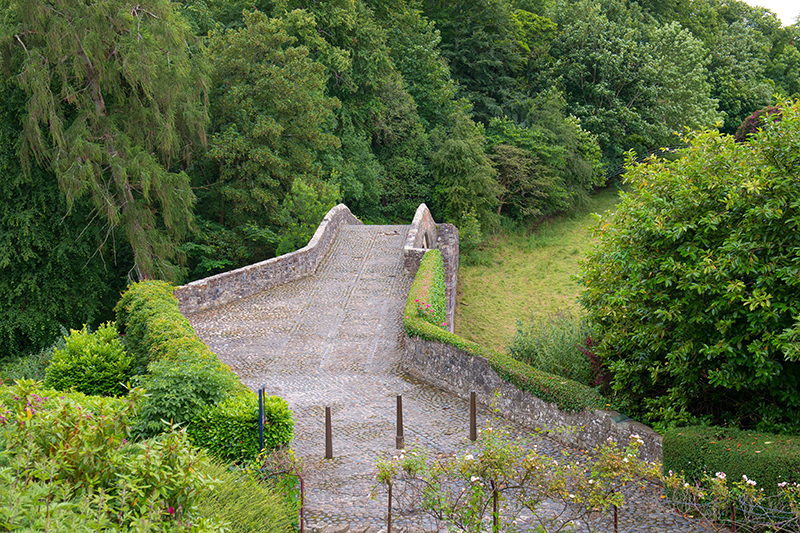 The beautiful landscape of Rabbie's birthplace, Ayrshire, was an inspiration for the young bard and poet where, in his day, the villages and towns were rife with storytelling. This tradition inspired the young Rabbie to carry on telling those stories to keep the Scotland of yesteryear alive in his poems. Pictured is the Brig o' Doon which features in the epic poem, Tam o' Shanter.

The tradition of the great supper

How many of us realise that each and every New Year's Eve the spirit and words of Rabbie Burns are with us still, as voices rise in song on the stroke of midnight as we all join hands to sing: "For auld lang syne my dear, for auld lang syne. We'll tak a cup o' kindness yet, for auld lang syne"? Rabbie's influence goes beyond Scottish culture it seems...

For one who appears to have loved the feasting and drinking, it is fitting that he is remembered best when revellers sit down, at tables across the globe, to a traditional Burns Night Supper. Scotland's iconic haggis takes pride of place in the Burns Night Supper festivities, being officially and literally blessed by the head of the table before it is carved. But before guests take their places at the supper table, it is likely they will be welcomed to supper by the strains of the bagpipes, as a piper - or several pipers at larger affairs - all donned in tartans, will lead a procession which may well comprise of the chef with the haggis on a silver platter at more formal occasions. More intimate suppers may settle for filling the room with traditional Scottish music streamed in from their iPhones. One thing is for sure, the true Scots honouring their nation's traditions to the letter will then say grace - The Selkirk Grace, a prayer penned by Rabbie and now an important part of any Burns Night Supper proceedings:

The traditional fayre of the Burns Night Supper table is, of course, haggis. When you look at the ingredients, it may not set your taste buds on fire, but it is actually delicious, especially when eaten in the good company of a Burns Night Supper. The savoury pudding-like ball is a steaming and spiced mix of sheep's heart, liver and lungs, all minced together with onion, suet, oatmeal and spices - it does have quite a kick. It was traditionally cooked in a sheep's stomach or intestines, although it is more likely to be encased in sausage skin today. Haggis tastes a little like a black pudding - perhaps a little nuttier in flavour, but peppery and, like those delicacies which hail from northern England, the recipes are very closely guarded with great pride.

Cock-a-leekie soup is the traditional starter at such feasts, and then onto the main attraction - the haggis. It is advisable to nick the casing of the haggis in the kitchen with a sharp knife to relieve the pressure within, as it has been known for diners to get burnt with steaming pieces of flying haggis, released from its casing as the carving knife makes its first cut! Once the carving of the haggis is underway, it is then served on a plate of mashed neeps (turnips) and tatties (potatoes), again, among the most famed food of Scotland. If you have room left for pudding, then it is likely to be Tipsy Laird's Trifle, which lives up to its name being made with whisky and Scottish raspberries, said to be the best in the world. There will, naturally, be a lot more whisky in the glasses on the table to wash the whole feast down with.

Burns Night Suppers are both colourful and savoury affairs. The haggis, though looking very pudding-like in its uncooked and uncarved form, is actually very crumbly, much like an oaty and peppery sausage. Revered as Scotland's national dish, diners at a supper must pay their respects to this national dish during a recitation of Burns' Address To The Haggis, one of the bard's most famous works.

Along with Auld Lang Syne and My Love Is Like A Red, Red Rose, Rabbie's most famous poem must surely be the Address To A Haggis, used to praise the haggis before the carving starts. Written in 1787, this lengthy verse celebrates Scottish culture and the first cut of the haggis is made when the line in the third verse: "An' cut you up wi' ready sleight, Trenching your gushing entrails bright" is read out loud. Once the recital of Rabbie's famous ode, that begins...

"Fair fa' your honest, sonsie face,
Great chieftan o' the pudding race!
Aboon them a' yet tak your place
Painch, tripe, or thairm:
Weel are ye wordy o'a grace
As lang's my arm."

...has then finished, the host invites guests to raise their glasses to pay their respects in a toast "to the haggis". And the feasting then begins in earnest!

Taste Scotland for yourself

RCI has 26 Scottish resorts affiliated to its holiday exchange programme, from the fabulous ski resort of Aviemore up in the Scotland's mighty mountains, to the regal and historic Lowlands of Dunbartonshire. The accommodation offered to RCI holidaying members is, more often than not, in some of the country's prime locations.

Cameron Lodges At Cameron House (RCI ID No. 2416) sits in the Dunbartonshire countryside, on the banks of Loch Lomond. The resort's five-star hotel, which shares the resort site, serves up a splendid menu of fine dining, while loch cruises can be booked through the resort's reception. Many good old-fashioned Scottish pursuits are to be enjoyed on this resort, such as fishing, boating and some championship golfing on its greens.

Macdonald Craigellachie Chalets (RCI ID No. 3845) are set in the heart of ski country in Inverness-Shire. Your Scandinavian-style accommodation is set against the backdrop of the River Spey and Cairngorm Mountains. In winter Aviemore is a ski-enthusiast's dream holiday destination, while in summer, these same wild and wonderful mountains provide a rugged rural retreat for walkers and hikers - and yes, you should take your golf clubs as golf is everywhere in Scotland, including at this resort which boasts a nine-hole course.

Kilconquhar Estate and Country Club (RCI ID No. 0493) offers a quintessentially Scottish experience, being set on an historic 16th century country estate in Fife and having its own castle at the heart of the resort. It comes complete with much traditional décor with lots of tartan accents, while outdoors, guests can improve their swing on the golfing range and putting greens. Lovers of all things equestrian are catered for with a stables and horseback riding around the estate, while tennis, badminton and basketball are also on offer. Hogmanay is a very special occasion at this resort, which is proud of the estate's Scottish heritage. Beyond the castle walls, Fife has many beautiful beaches and villages to explore, while St Andrew's Old Course, the golfer's mecca, is close by and Edinburgh is only an hour away.

There are 26 resorts affiliated to RCI's holiday exchange programme. Pictured here are Cameron Lodges At Cameron House, nestled in Scotland's Lowlands by Loch Lomond; Macdonald Craigellachie Chalets, up in the mountains of Aviemore; Kilconquhar Estate and Country Club, set in an historic estate in Fife.

If you are already an RCI member, you can use your membership to take advantage of accommodation in more than 4,300 resorts in over 110 countries. Click on the RCI Resort Directory button below to see where you could be holidaying.

If you own timeshare, but are not yet a member of RCI, you can become part of our holiday exchange community today. By clicking on the Join RCI button below, you can sign up in just a few simple steps. Being able to swap your timeshare holiday home for other stays in so many exciting destinations across the world will give you the real value from your purchase of timeshare - it's all about opening up new travel opportunities for you and your family.