Which is America’s greenest city? We’re not talking about the environment here, but about St Patrick’s Day celebrations. Nearly 40 million Americans can trace their ancestry to the Emerald Isle, but this unofficial holiday that honours Irish heritage has long been a much-loved tradition for people of all backgrounds.

Two of the top contenders are Boston, which staged the first St Patrick’s Day Parade in North America in 1737, and Chicago, which attracts some two million revellers and ties with New York as having the largest parade in the country. With their deep Irish roots, St Patrick’s Day festivities in these cities often spill beyond the 17 March feast day of the Celtic saint to cover a week or more of emerald-tinted events.

Organised pub crawls feature largely in the St Patrick's Day festivities, and there are some splendid pubs to choose from in Boston.

The first St Patrick’s Day celebrations in America began as a show of Irish solidarity in a new and often hostile land. Ireland’s Potato Famine of 1845-49 drove hundreds of thousands of immigrants to make the perilous journey across the Atlantic. Impoverished and unskilled, they settled in large cities where they took low-paid jobs at factories, docks and building sites. The Irish endured decades of social and religious discrimination. But they found strength in Irish neighbourhoods, cultural societies and, increasingly, in local politics. By the mid-1900s, the Irish had become a major political force, particularly in Boston and Chicago.

In both cities, long-established Irish communities in traditional neighbourhoods remain at the heart of Irish culture. It’s here that you’ll find some of the liveliest St Patrick’s Day celebrations anywhere.

Perhaps it’s a release from the cabin fever of winter, but along with its display of Irish pride, the holiday is a chance to don fancy dress and hit the streets for some harmless fun. St Patrick’s Day is a spring bacchanal, blessed by the Irish gods of beer and fuelled by food, music, dance and humour from the Emerald Isle. Shamrocks and silly hats are everywhere. The air rings with all the exuberance and raucous revelry of a Celtic Mardi Gras, and the cities sparkle with not just 40, but 400 shades of green.

Irish dancers and a balloon leprechaun participate in the annual St Patrick's Day Parade in Chicago; the parade is a cultural and religious celebration of the city's Irish heritage.

The country’s oldest Irish enclave is also its largest. In the Boston metropolitan area, nearly 23 percent of the population claim Irish descent, more than in any other city. 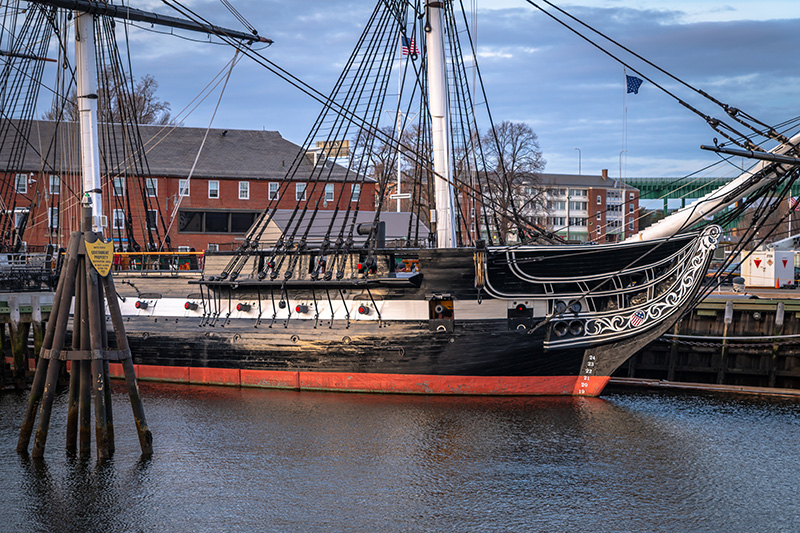 The USS Constitution is an historic warship from America's early days, docked permanently in Charlestown, a waterfront neighbourhood with strong Irish-American roots. Pay the interactive crew a visit, where there's lots to interest all the family.

There are Irish neighbourhoods all around Greater Boston, but none is as well known as South Boston. Affectionately referred to as ‘Southie’, a traditional working-class community developed here, as people found work on the waterfront docks and in the ironworks, glassworks and factories. Although it has now become a desirable residential area with development and housing prices to match, you can still see streets lined with old-fashioned rowhouses and handsome turn-of-the-century Victorians. There are also family-friendly beaches and the Fort Point Channel Historic District, which serves as a centre for many working artists. 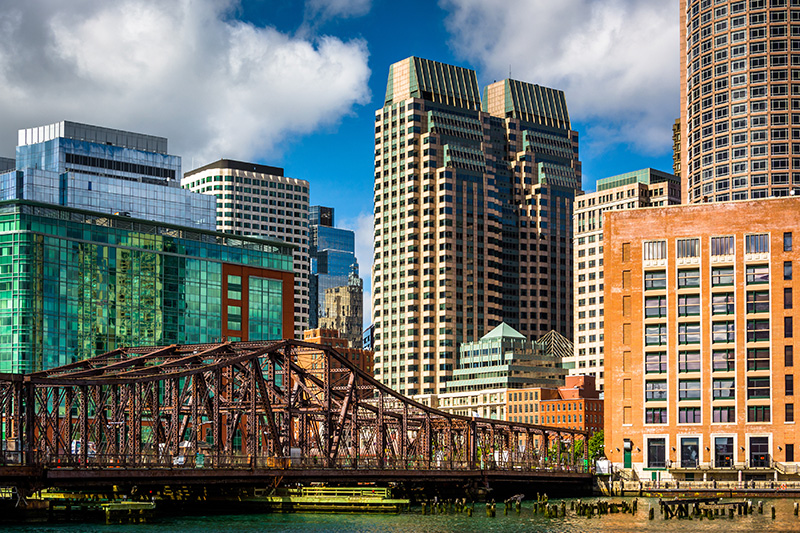 Where old meets newer. An old bridge over the Fort Point Channel in the Historic District of Boston contrasts with the newer high-rise buildings.

Southie is the natural home for Boston’s St Patrick’s Day Parade, held on the Sunday closest to 17 March. Each year up to a million people stake their claim along Broadway to watch the spectacle, which begins at 1pm. Beginning at MBTA’s Broadway Station and ending near Andrew Square, the parade lasts up to five hours. 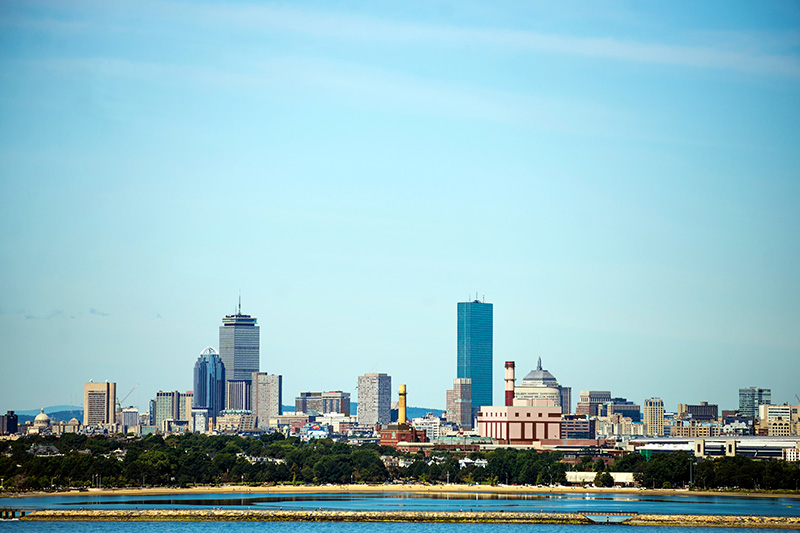 City skyline of Boston, fronted by Southie in the foreground.

The event is also known as the Evacuation Day Parade because the feast day of Ireland’s patron saint coincides with a key episode during America’s War of Independence. In 1776, under the cover of night, George Washington’s troops placed 59 cannon atop Dorchester Heights in South Boston, surprising 3,000 British troops who hastily evacuated their ships from Boston Harbour. The parade honours military services and veterans in commemoration of that battle. 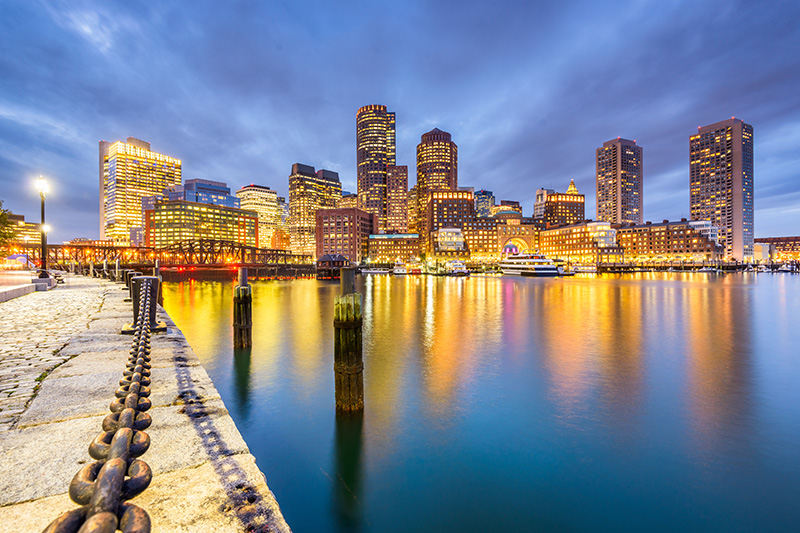 Boston's city skyline glitters in the harbour waters at dusk.

Along the 3.6-mile route, parade-goers brave the brisk March winds to watch a rousing procession of bagpipers from Ireland, Colonial fife and drum bands and marching brass bands from across the country. Majorette troops perform impressive dance routines, enormous Clydesdale horses clomp past, and dozens of firefighters and military veterans stride proudly in formation. Local celebrities and sports stars wave to the crowds from atop colourful floats. Local politicians and members of long-standing Irish societies also ride and march along the route. 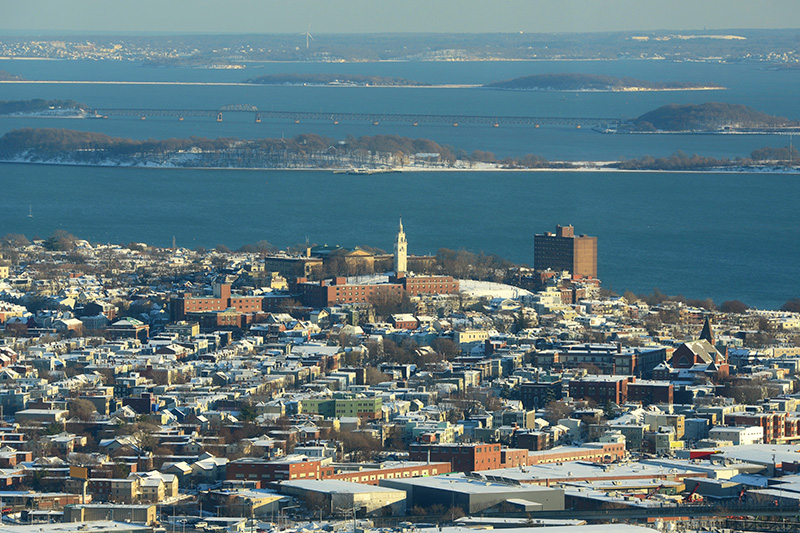 A view of the Dorchester Heights Monument in South Boston, a city which has much to offer visitors at any time of year - you don't have to wait for St Patrick's Day...

Waving Irish flags and kitted out in green hats, emerald shirts, glittery costumes and trinkets of every kind, the boisterous crowd is almost as entertaining as the parade itself. Merrymakers are readily fuelled by the host of traditional Irish pubs nearby, many of which carry on their own events and celebrations.

Organised bar crawls are among the many St Patrick’s Day events on offer. But it’s easy to explore South Boston’s great local hang-outs at any time of year. Amrheins at 80 West Broadway is Southie’s oldest bar and restaurant, with a beautiful hand-carved bar and Guinness on tap. For whiskeys - over 100 to choose from - head for Worden Hall (22 W Broadway). Other neighbourhood watering holes with an authentic Irish-American atmosphere include Touchie’s Shamrock Pub and L Street Tavern (both on East 8th Street) and Murphy’s Law (837 Sumner Street).

The Irish Heritage Trail takes in 20 fantastic sights in Downtown Boston, including the Rose Kennedy Greenway, a verdant pathway lined with restaurants and cafés. If contemporary art is your thing, then visit one of the exhibitions, or take a ride on the Greenway Carousel - inspired by the air, sea and land animals of Boston Harbour. Other sights to catch on the trail are the Irish Famine Memorial in Downtown Boston and the Granary Burying Ground which is one of the oldest cemeteries in Boston, being founded in 1660.

For those who are keen to learn more about Boston’s Irish history, take a walk on the Irish Heritage Trail. This self-guided, three-mile route takes in 20 sites throughout Downtown and the Back Bay areas. Among the highlights are the Rose Kennedy Garden, the Boston Irish Famine Memorial, the Granary Burying Ground and statues of notable Irishmen in art, politics and the military.

Free maps are available at the visitor information centre on Boston Common, or online. Guided tours are sometimes offered by the Boston Irish Tourism Association. Contact the visitor centre too for more information on other St Patrick’s Day events around the city, from music concerts and brewery fests to dance performances, an Irish film festival and more. 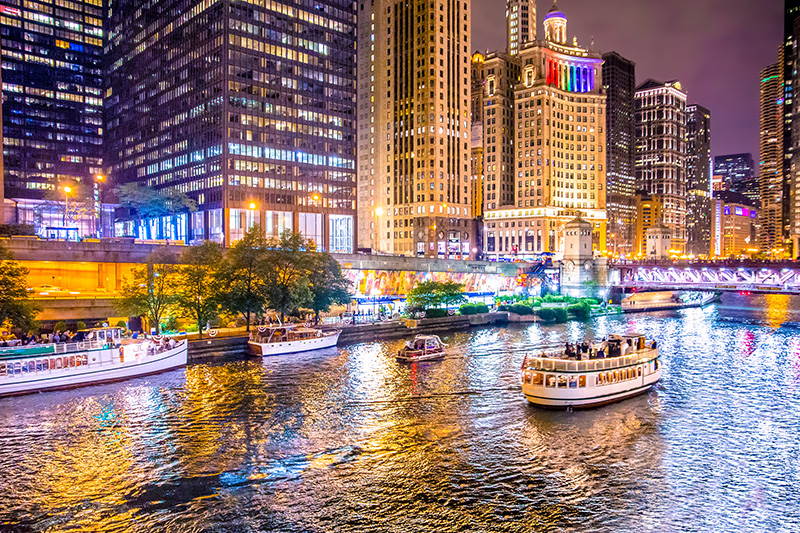 The Irish have had a major influence in Chicago almost since the city’s founding. The first St Patrick’s Day Parade was held here just six years later, in 1843, and by 1860 Chicago claimed the fourth-largest Irish population in the nation.

Surprisingly, the parade only took place sporadically over the next century until Mayor Richard J Daley revived it with a 10,000-strong procession through the Downtown Loop in the 1950s. Daley, the consummate politician, was never one to do things by halves. His annual celebration of Irishness included not only painting the town green, but the river too. 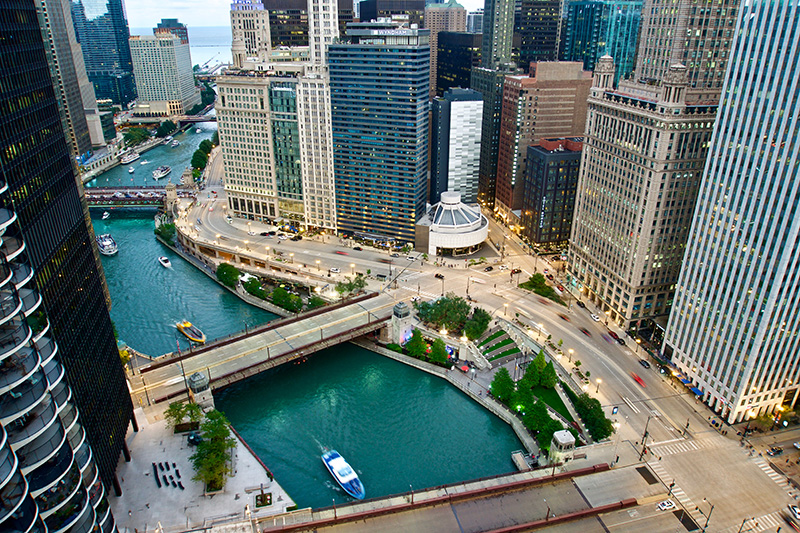 A view of Downtown Chicago, following the line of the river, which is dyed green in honour of St Patrick's Day.

In 1962, he ordered 100 pounds of vegetable dye to be dumped into the Chicago River beside the parade route along Wacker Drive. Motorboat propellers churned the concoction, turning the river a bright, glowing green. The idea came from an agent of the plumbers’ union, which had been using the dye to detect pollution in the river. Ever since, the Plumbers Local 130 has been the official sponsor of the St Patrick’s Day parade, and dying the river green has been its signature tradition.

Both events take place each year on the Saturday before St Patrick’s Day. Spectators get an early start, lining the bridges and the Chicago Riverwalk between Columbus Drive and State streets, to see the river transformed into a vivid green. The dyeing begins at 9am, and the colour only lasts for about five hours. Rest assured that the city uses organic dyes that won’t harm wildlife or the environment. 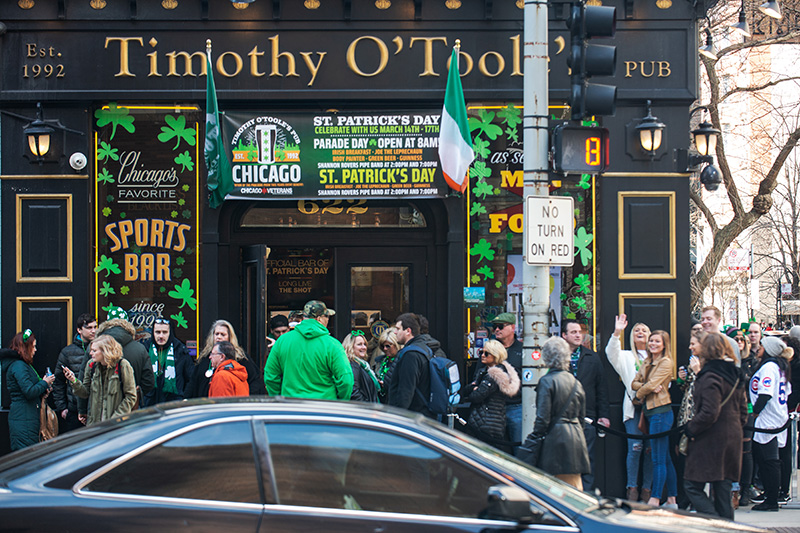 Stop off at one of the local pubs while watching the St Patrick's Day procession in Downtown Chicago.

A fantastic way to see this spectacle is from the river itself, on board a sightseeing cruise boat. Several cruise lines offer fascinating architectural cruises on the river all year round, but this once-a-year journey ramps up the fun with Irish food, drink and music, and the chance to photograph the iconic Downtown skyline reflected in the shamrock-coloured waters. 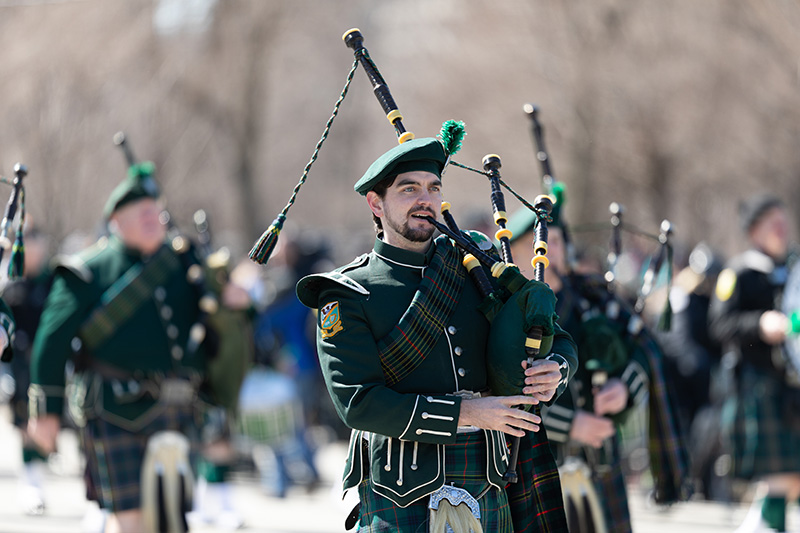 After the parade, the sea of green-hatted revellers spills out to continuing festivities around the city. The St Patrick Festival, held at the Irish American Heritage Center, is a grand celebration with Irish foods and drink, traditional and modern music and dance, and activities for children and families, as well as Irish arts and crafts, Irish language lessons and genealogy workshops. Old St Patrick’s Church hosts the Shamrock'n The Block party, an outdoor event with corned beef sandwiches, Irish beer and non-stop music and dance.

In Chicago, one day of merry-making isn’t enough. Sunday brings more parades and neighbourhood celebrations. The South Side Irish Parade and the Northwest Side Irish Parade are two of the best, with the chance to share the Irish spirit in local bars and community events. 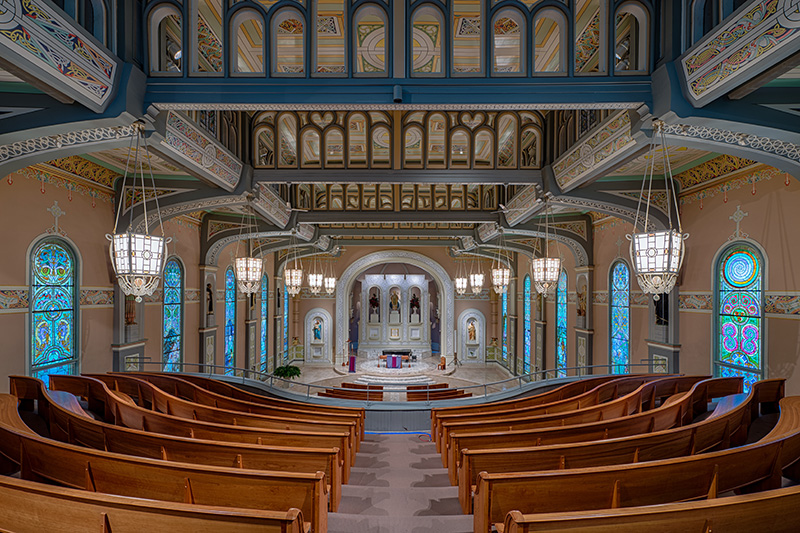 Go and visit the beautiful architecture of Old St Patrick's Church in Chicago, which plays its part in the St Patrick's Day celebrations.

With their strong ancestral roots and exuberant celebrations of their Irish heritage, it would be hard to say which of the emerald cities - Boston or Chicago - shines the brightest. But wherever you choose to spend St Patrick’s Day, you’ll be guaranteed some good Irish craic, American style.


If you're looking for new holiday adventure and fresh places to explore, then head over to the RCI Resort Directory and book your next getaway. Click the button below to search for your home-from-home accommodation.

If you already own timeshare but are not a member of RCI, you could become a part of our holiday exchange community today. If you would like to have access to over 4,300 resorts in more than 110 countries, click on the Join RCI button below and sign up in just a few simple steps.