Beer with cheese. Wine with chocolate. I’ve tried many interesting food and drink pairings on my travels. But whisky with a bacon butty? I'm in Scotland, of course, the undisputed home of whisky. Uisge beatha, the 'water of life', has been made here since at least the 15th century. It bubbled out of homemade stills in the hills and glens, and into the veins of Scottish culture, from the poems of Rabbie Burns to the recent remake of the film classic Whisky Galore! Today, some 126 licensed distilleries support a Scotch whisky industry worth more than £2.5 billion a year. 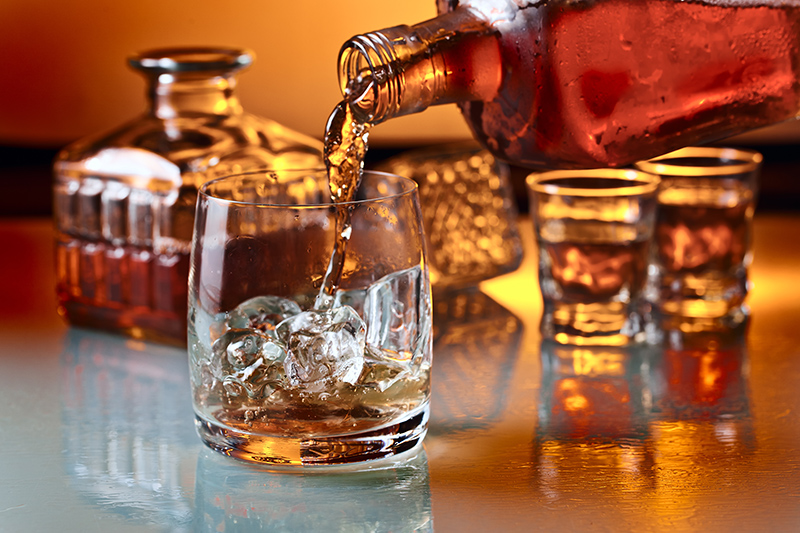 Scotland has been producing this fiery liquid for centuries. The first record of Scotch whisky was written in the Exchequer Rolls of Scotland in 1495.

It’s hard to spend much time in Scotland without being offered a 'wee dram', which has long been a symbol of Scottish hospitality. Although I’m not an avid whisky drinker, over the years these small cups of kindness have piqued both my taste buds and my interest. But like many travellers, I’m still somewhat baffled and a little intimidated by the vast array of whiskies proudly displayed behind many a bar.

So I’ve come to the Spirit of Speyside Whisky Festival for an education. This five-day celebration, which takes place every year in late April/early May, is one of the most enjoyable ways to learn about whisky. 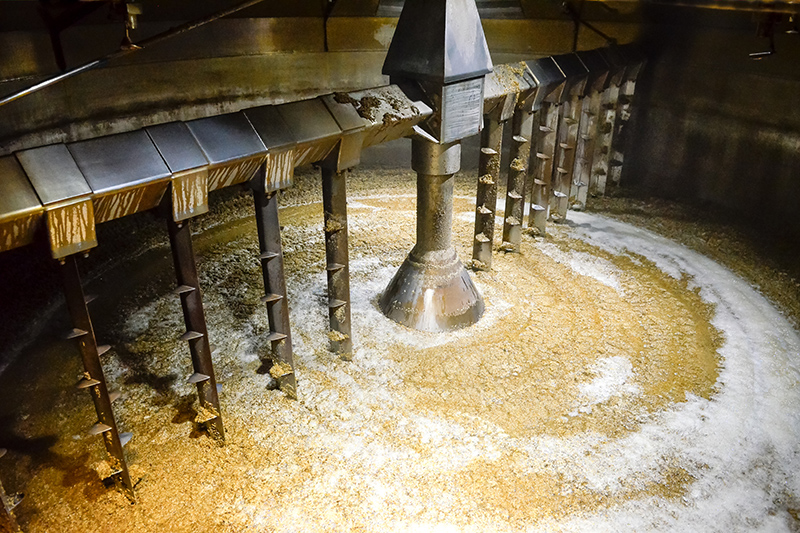 A traditional mash tun used in the distillation of malt whisky. This machine uses a process of very hot water and 'agitation' to remove sugar as part of the distilling process.

Although whisky is made throughout the country from the Lowlands to the Highlands and islands, over half of Scotland’s distilleries are in Speyside. This beautiful region, which lies between Aberdeen and Inverness, is set along a scenic stretch of the River Spey, running from the Cairngorms Mountain range to the Moray Firth. Just getting here is worth the drive. 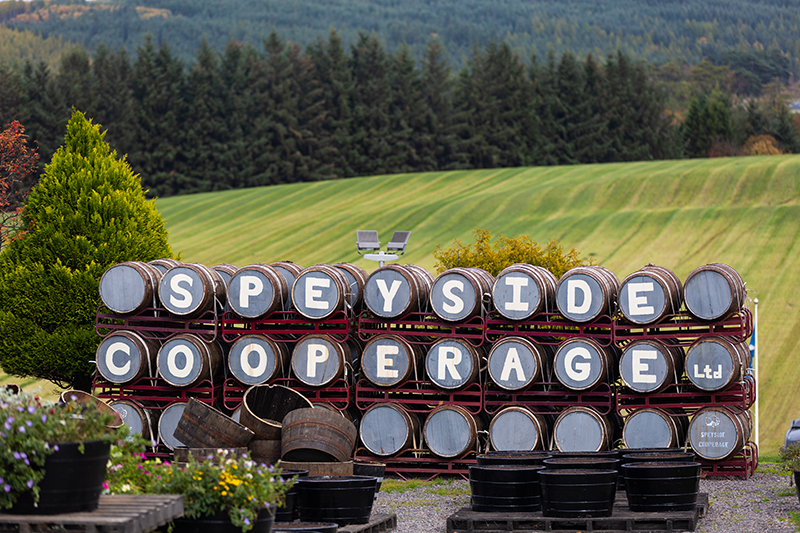 Even the casks are crafted in the legendary region of Speyside. The Speyside Cooperage is the only establishment of its kind in the UK, and produces/repairs 150,000 casks made from American Oak each year.

The first thing I learn is that, despite whisky’s breadth and prestige, it boils down to a few simple facts. Scotch whiskies are primarily single malts, distilled from barley and matured for at least three years in oak casks, or blended whiskies made from a mixture of malt and a lighter grain. There are also whiskies made entirely from grains. Speyside is particularly renowned for its single malts, and what makes them different from one another is the barley and water used, the type of still, the aging process and the skill of the producer.

The second thing I learn is that, although it’s a serious business, whisky is fun. Thus, on a grey, misty morning, I find myself at The Whisky Shop in Dufftown, staring at four single malts and a bacon roll. 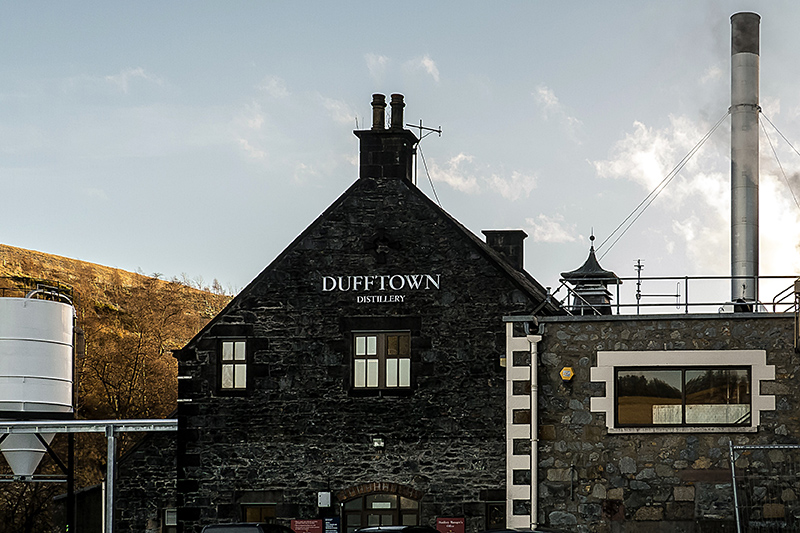 The Dufftown Distillery in Banffshire, Scotland.

Mike Lord is the shop’s owner and inventor of the Bacon Roll Challenge, one of the festival’s most popular events. He instructs our table of eight participants to take a bite of the sandwich, followed by a sip of the whisky and another bite of the roll. We try this with each of the whiskies, then vote to decide which one is the best match.

“It’s more difficult than wine pairings because the flavours in whisky are more complex,” Lord says. “For this event, I especially look for new releases that have a bit of oiliness in their mouth-feel to complement the bacon.” 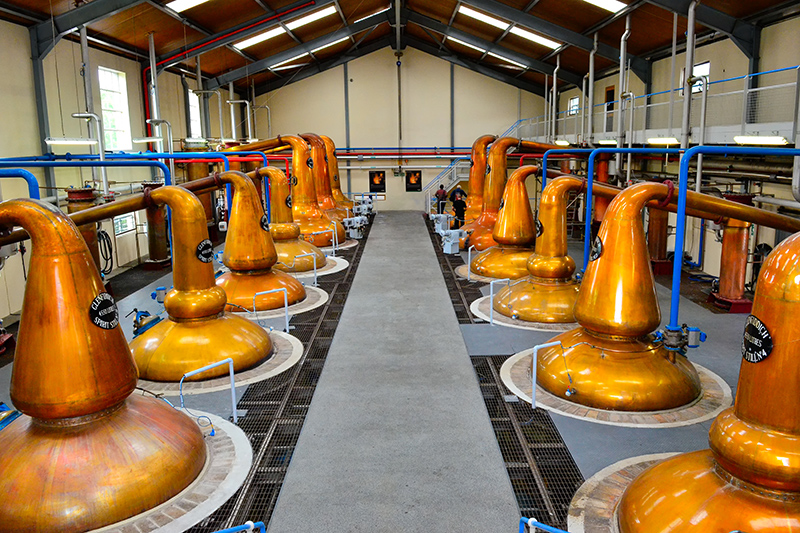 The distinctive pot stills in Dufftown distillery - the only time whisky distilling should go pear-shaped!

With some 650 different whiskies in his shop, Lord has plenty to choose from. He’s thrilled when our winner is a 15-year-old Cardhu, whose distillery is just down the road.

While the Bacon Roll Challenge only happens during the festival, many other activities are available year-round. With over 500 events, there is something for everybody, from beginners to connoisseurs, families and even non-drinkers. 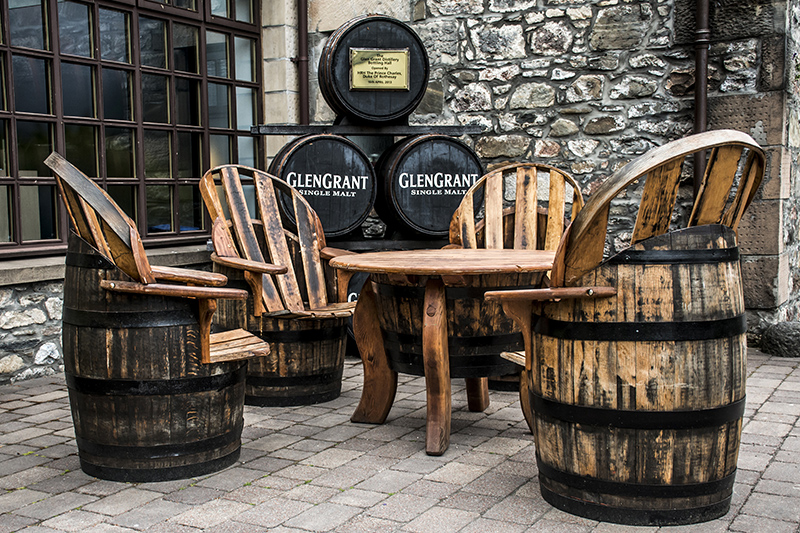 A rather unique outside seating area at the GlenGrant Distillery, crafted from whisky barrels.

I head over to GlenGrant Distillery in Rothes for a stroll in the Victorian Gardens. Now covering 27 acres, they were created in the mid-19th century by John Grant, who founded the distillery with his brother, James. During the festival there are special garden tours and a Victorian picnic in period dress, but this luxuriant, peaceful place is free to visitors all year long.

Passing dozens of blossoming apple and cherry trees, I follow a woodland path along a rushing stream with Master Distiller Dennis Malcolm, who was born and bred in the distillery’s grounds. He tells me that GlenGrant is the only Speyside distillery that bottles 100 per cent of their whisky on site. For a mere £4 you can tour the facility and pour your own tasting.

The path leads to a lovely waterfall, where we pause for a wee dram and tales of the brothers Grant. James, the innovator, financed a steam railway for Speyside and was the first to generate electricity here.

“Whisky making is like being a farmer or a gardener,” Malcolm says. “You may not live to see the results of what you're doing but you're laying down the legacy for future generations.”

Whisky is an art 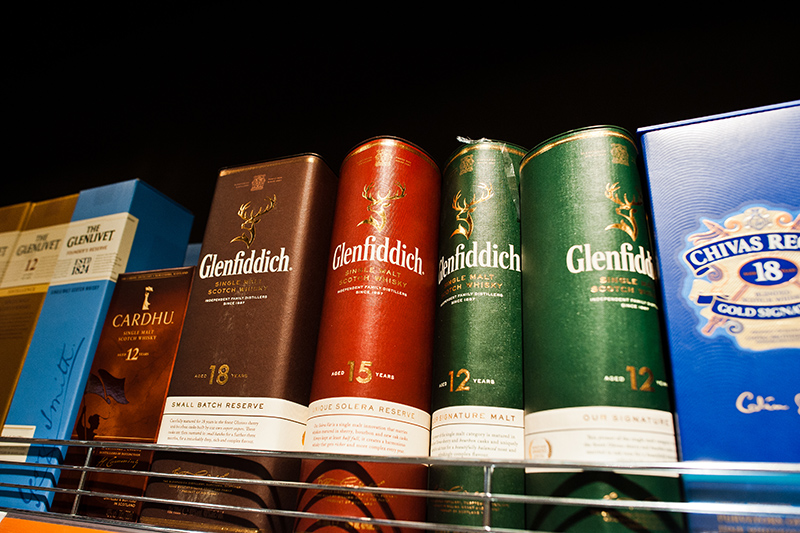 Glenfiddich whisky is amongst the most well-known and loved brands in the world.

Most Speyside distilleries have visitor centres and offer tours. Others can be visited by appointment. After several tours and tastings, it’s clear to me that whisky making is more than a business. It’s an art.

Nowhere is this more true than at Glenfiddich, with its Artists in Residence programme. Each year, the distillery hosts eight artists from all over the world, who create original pieces based on their experience in Scotland. The works are exhibited on site in the gallery during the summer. 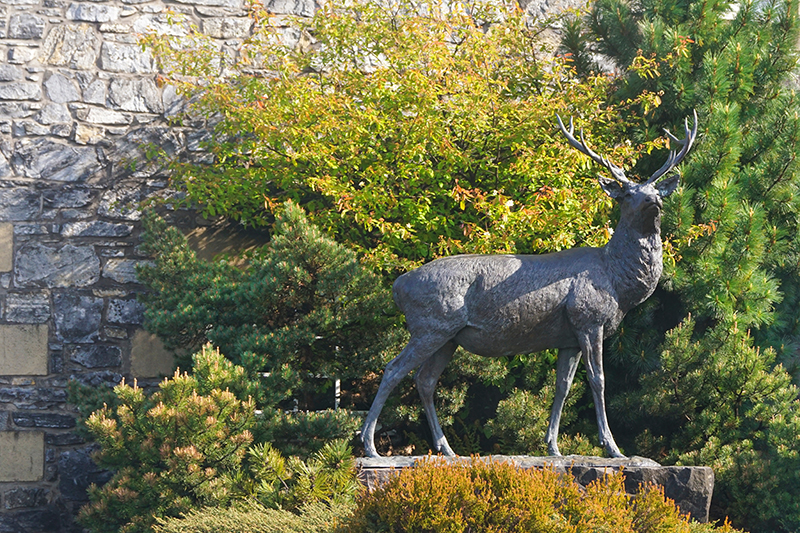 Glenfiddich stands for 'Valley of the Deer'. The family-owned business was founded in 1886 and is still in the same location today.

Glenfiddich, which means 'Valley of the Deer', is still family-owned; it’s now run by the fifth generation descendants of founder William Grant. After a delicious lunch in the Malt Barn Restaurant, I join the Solera Deconstructed tour for an in-depth look at whisky making.

Starting in the original stone distillery that Grant and his nine children built by hand, we move past the mill room to the mash house. Amid the heavy, sweet aroma of fermenting malt, we peer down into huge mash tuns filled with frothing, bubbling grist, and up at giant wooden washbacks made of Douglas fir. Then it’s onto the still room, with its gleaming rows of traditional copper pot stills.

We visit Glenfiddich's exclusive Solera warehouse and another where casks of rare whiskies are kept. The tour ends with a tutored nosing and tasting, followed by a hands-on blending session where we use whiskies from sherry, Bourbon and new wooden casks to create our own unique malt. I leave with a small bottle of 'my' whisky to share with friends, and a new appreciation for the blender’s skills. 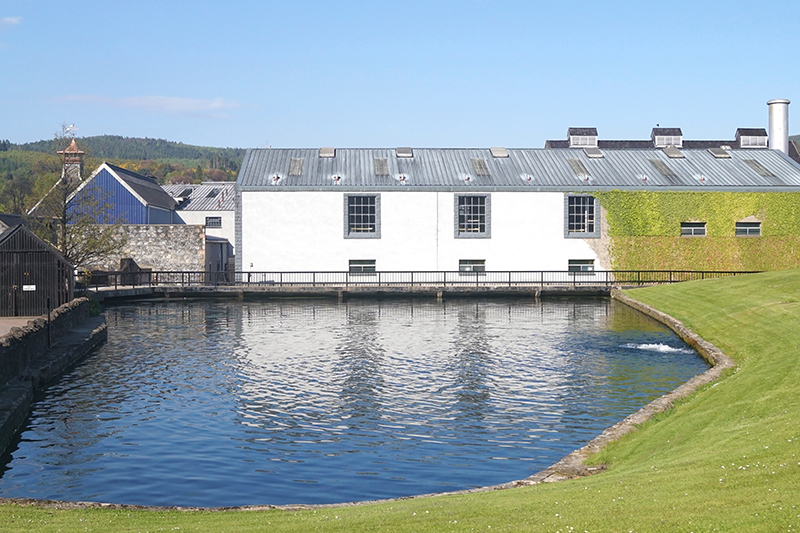 The Glenfiddich Distillery in Dufftown, Banffshire, offers guided tours and a tutored nosing and tasting of single malts.

In 1644, the English Parliament slapped a tax on whisky, plunging Scotland into a colourful era of illicit stills and whisky smuggling that lasted for two centuries. On a chilly morning, I climb into an eight-wheel-drive Argocat for the Glenlivet Hill Trek, an adventure tour which follows the old smugglers’ trails into the remote hills below the Cairngorms.

Halfway up a rugged slope, we bounce to a stop in front of the Peat Reek Bothy. Inside this little stone hut is a tiny copper still, like the one hill farmer Robbie McPherson once used to make a small fortune from illegal whisky. 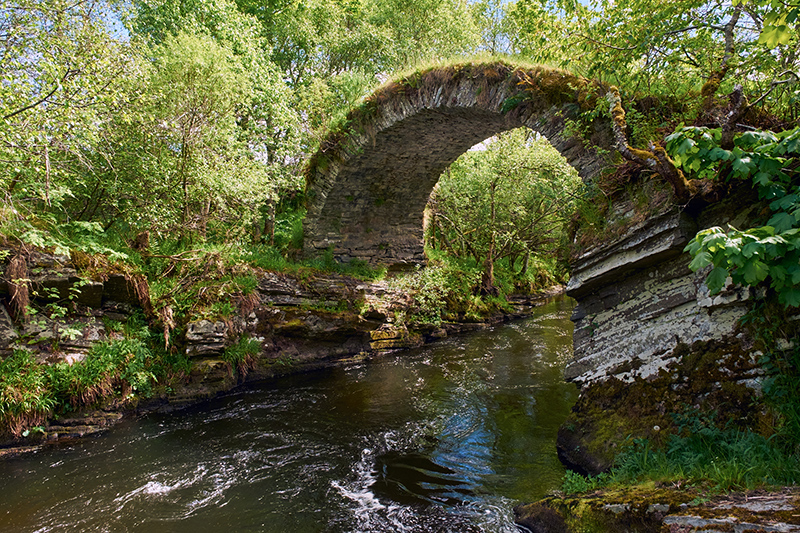 Take the guided Glenlivet Hill Trek in the Scottish Highlands for breathtaking views, such as the babbling stream pictured above.

“Small stills were easier to hide,” explained our guide, Charlie Ironside. “Excise men were easily spotted walking over the open countryside, and neighbours would alert each other. "When whisky smuggling was rife, there were more than 200 illegal stills here,” he tells us. “Barrels of whisky were hidden in the heather that have never been found.” 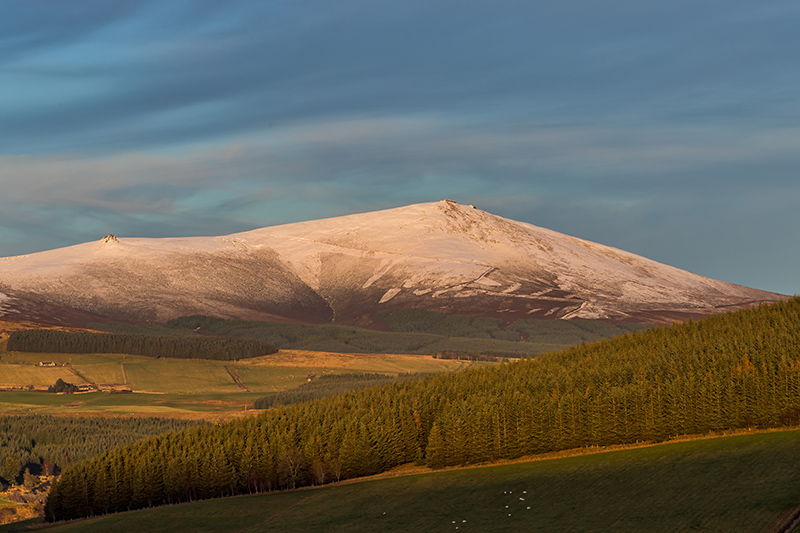 The breathtaking views across the Scottish Highlands from the Speyside region, home to Glenlivet whisky.

I keep my eyes peeled as we carry on up the steep slopes to the summit of Cairn Liath. Here, we sip golden glasses of The Glenlivet Founder’s Reserve as we drink in the stunning panorama of mountains and glens.

Far below, steam billows from the chimneys of the Glenlivit Distillery. Bootlegger George Smith established Scotland’s first licensed distillery here in 1824, setting Scotch whisky on the path to respectable prosperity. As we wind our precipitous way down towards it, I feel the aura of excitement and mystery that still haunts these ancient trails.

My tour of the distillery, which blends Smith’s traditional methods into an impressive modern facility, ends with a tasting in the Malt Loft. By now, I’m an old hand. I nose the whisky with a gentle sniff, enabling me to detect more subtle flavours than tasting alone. I sip the whisky neat, then add a drop or two of water to release more of the aromas and oils.

Like all of the Speyside single malts I’ve tried, it’s exquisite. And funnily enough, I find myself craving a bacon roll. 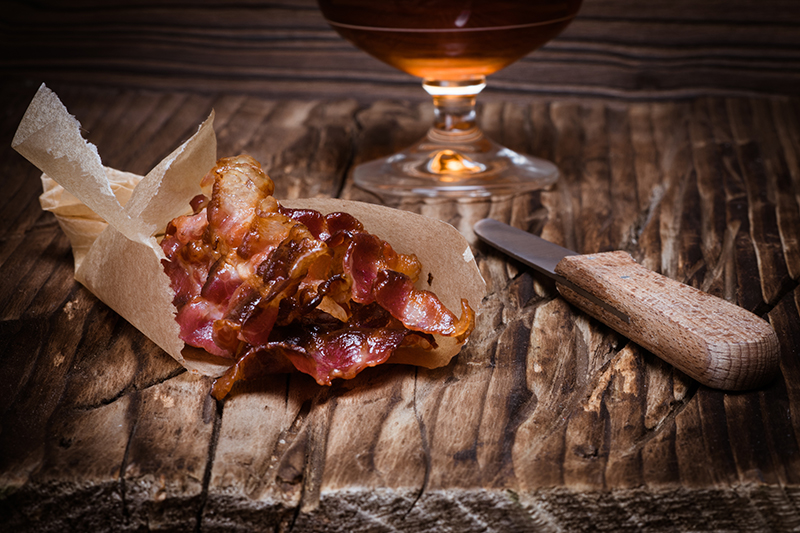 The smoky qualities of both bacon and whisky make them the perfect pairing to complement one another.

Shop for exclusive single malts at Gordon & MacPhail’s specialist wine and spirits shop in Elgin. The deli has a range of quality Scottish products. Pairing sessions of whiskies with chocolate or cheese can also be arranged.

The Quaich Bar in the Craigellachie Hotel stocks over 1,000 malt whiskies and is a popular Speyside watering hole. Downstairs, there’s delicious food and live music in the Copper Dog, mischievously named after the cylinders distillery workers used to pilfer whisky.

Visit Scotland’s Whisky Map for details of distillery tours throughout the country: www.visitscotland.com/see-do/food-drink/whisky/distilleries/

The Macallan Distillery and Visitor Experience gives an insight into the process, production, people and passion that makes every single malt bottle.

The Spirit of Speyside Whisky Festival takes place annually in late April or early May. Advance booking is recommended for the most popular events, visit: www.spiritofspeyside.com 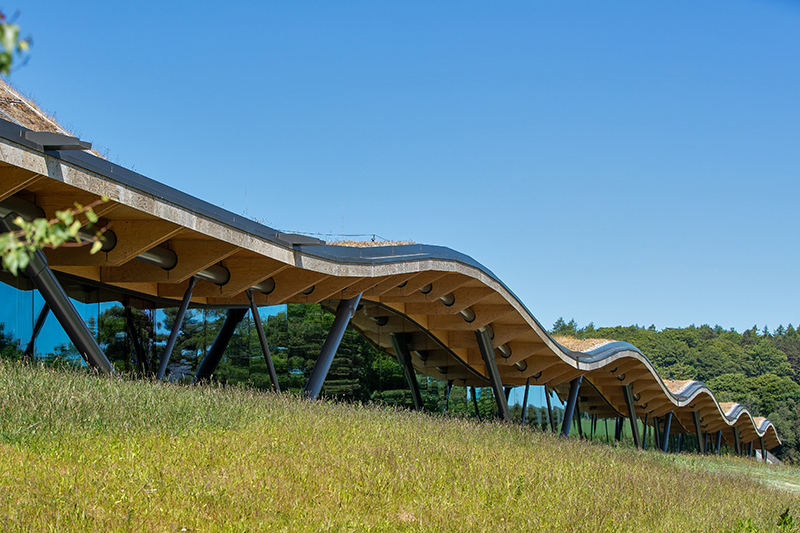 If you are already an RCI member, you can use your membership to take advantage of accommodation in more than 4,300 resorts in over 110 countries. Click on the RCI Resort Directory button below to see where you could be holidaying.

If you own timeshare, but are not yet a member of RCI, you can become part of our holiday exchange community today. By clicking on the Join RCI button below, you can sign up in just a few simple steps. Being able to swap your timeshare holiday home for other stays in so many exciting destinations across the world is giving you the real value from your purchase of timeshare - it's all about opening up new travel opportunities for you and your family.

The Queen Of The Scottish Lochs

'Tis The Season'... For A Winter Holiday In Scotland