The Queen Of The Scottish Lochs

Ask most people to name a Scottish loch and you’ll likely get one of two answers. Half will think of Loch Ness, home of the legendary monster. The rest will cite Loch Lomond, whose bonnie, bonnie banks are celebrated in the famous folk song.

Loch is the Scottish Gaelic word for 'lake', and it’s estimated that Scotland has at least 31,460 of them. Loch Lomond is the biggest, covering over 27 square miles, making it the largest inland body of water in Great Britain. In volume, it is second only to Loch Ness, which is deeper.

Over the years, I’ve often visited this popular beauty spot, which is known as the Queen of Scottish Lochs. Although it’s only 20 miles from Glasgow, it’s a world away from the city bustle. Its southern shores are bordered by pastoral green hills, rising to lofty mountain scenery in the north. This mix of gentle and rugged landscapes is what makes it so appealing.

What’s more, the loch is dotted with nearly 50 islands and islets, sparkling like emerald jewels in the blue waters. Most are named with the prefix ‘inch’, from the Gaelic word innis (island), such as Inchmurrin, the largest freshwater island in the British Isles. In olden times these islands were inhabited by saints, whisky smugglers and everyone in between. Today most are privately owned, and several are conservation areas.

Much of Loch Lomond’s character is down to geology. It lies on the Highland Boundary Fault, which forms the natural dividing line between the Central Lowlands and Highlands. The loch is about 23 miles long, but while the southern half of the loch measures nearly five miles across at its widest point, it narrows to a long finger lake barely half a mile wide at its northern tip.

Along the western shore

Since there is no road through the wild landscape on the northeast side, it’s not possible to drive all the way around the loch. From Balloch, a busy hub at the southern tip with a castle, country park, aquarium, shops and a visitor centre, I headed north on the A82, which hugs the western shore. 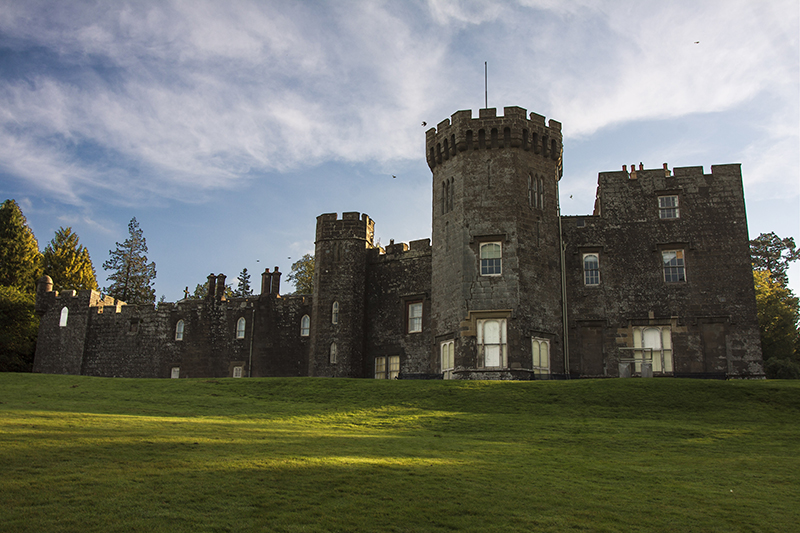 As you travel around the beautiful Loch Lomond, you will come across Balloch Castle, situated within the country park. Visit the castle as it has impressive views of the Loch.

Long stretches of the loch are lined with trees, making it hard to get more than a passing glimpse of the water while keeping your eyes on the narrow road. I looked for picturesque places to pull over, and found a nice picnic area and waterside stroll at Duck Bay, a few miles north of Balloch.

Luss is a pretty conservation village with flower-clad 18th- and 19th-century cottages, easy walks, and great views from the pier. Boat trips operate from here, and there’s a popular beach for paddling. A few miles beyond, Firkin Point provided a quieter spot for a lovely walk along the shore. 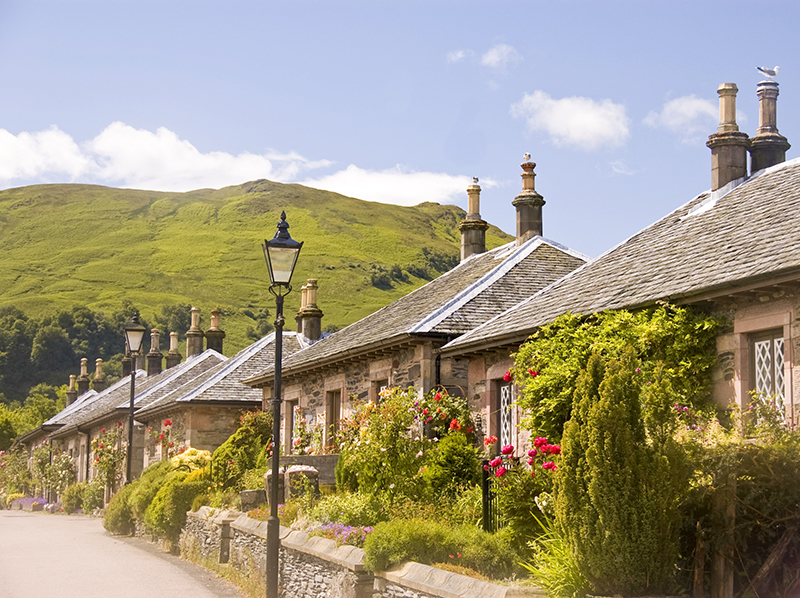 Luss village is on the western shore of Loch Lomond. Take a walk down to the pier, passing neat rows of cottages with flowers in bloom, offering a picturesque walk towards the Loch. This is a great location, as if you visit in the evening there is a chance you could see the Aurora Borealis.

I soaked up spectacular views of Ben Lomond, which towers above this section of the loch on the eastern side. Rising to 974 metres, it is the most southerly of Scotland’s Munros, a term for mountains over 914 metres.

As I travelled further north, the loch narrowed, the crowds thinned and the scenery became wilder. Beyond Tarbet, the main stopping places are Inveruglas, with its panoramic views from a manmade pyramid, and Ardlui, whose quaint marina is surrounded by idyllic countryside. 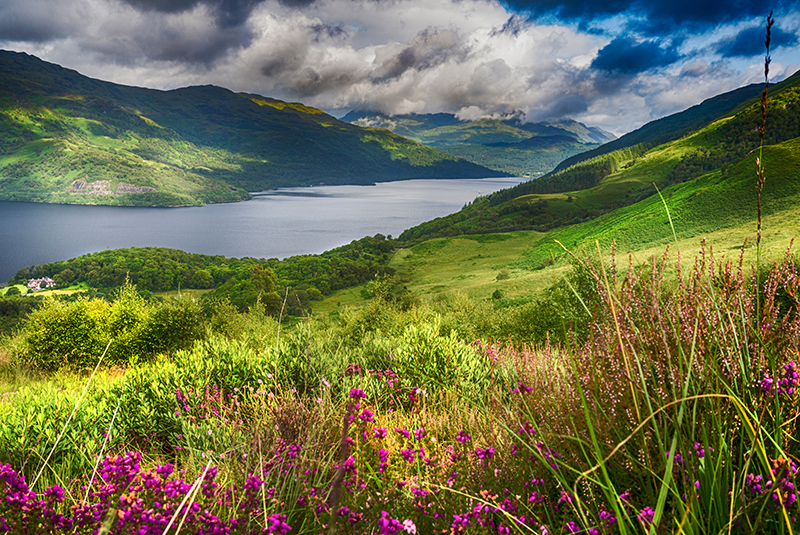 Ben Lomond is a mountain in the Scottish Highlands and stands at 974 metres. The surrounding area is beautiful, so well worth a visit.

Tarbet, at the junction with the A83, is a buzz of activity on the western shore. In 1263, Vikings sailed up Loch Long to Arrochar and pulled their longboats across the isthmus to Tarbet, from where they raided the islands and settlements around Loch Lomond. Tarbet’s pier has a peaceful purpose today as the launching point for sightseeing cruises on the loch and a waterbus service to the opposite shore.

Tarbet is the terminus for the West Loch Lomond Cycle Path, which runs 17 miles south to Balloch. If you haven’t brought your own, you can hire a bike and cycle on the traffic-free, waterside stretch to Luss, about 10 miles south. From here, catch a waterbus for the return journey.

From Tarbet you can access several long-distance walking paths on either side of the loch. You can catch a waterbus across to Rowardennan, the starting point for a trek up Ben Lomond. Instead, I opted for the boat to Inversnaid and a visit to the nature reserve there, followed by a less ambitious but equally beautiful hike on the West Highland Way along the loch’s eastern shore. 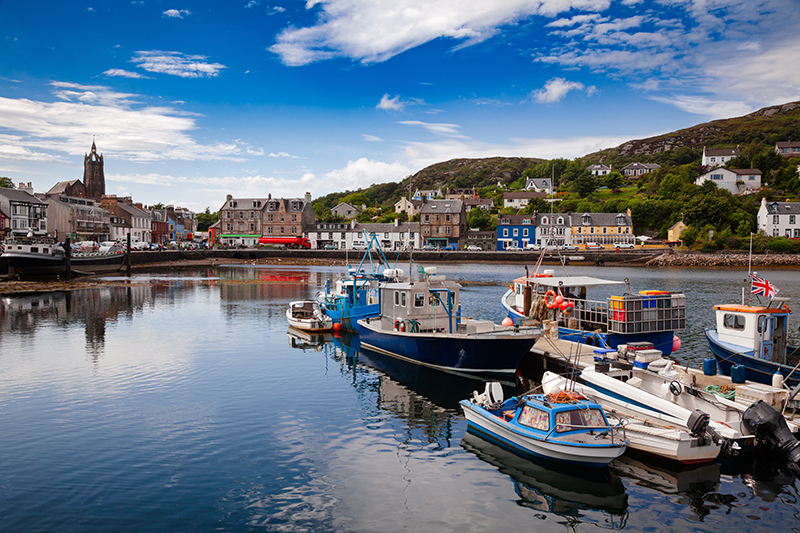 Tarbet Harbour lies on the stunning shores of Loch Fyne Argyll, with plenty of shops, galleries, restaurants, cafés and bars wrapped around the natural harbour, which is bustling with activity in the summer season and also hosts a wide variety of festivals and events every year.

The loch is at the heart of Loch Lomond and The Trossachs National Park, Scotland’s first national park. Covering 720 square miles, it stretches from Callander west to the Cowal Peninsula in Argyll, and north into Breadalbane. Within its boundaries are 21 Munros, two forest parks, two national scenic areas and dozens of nature reserves and conservation sites. 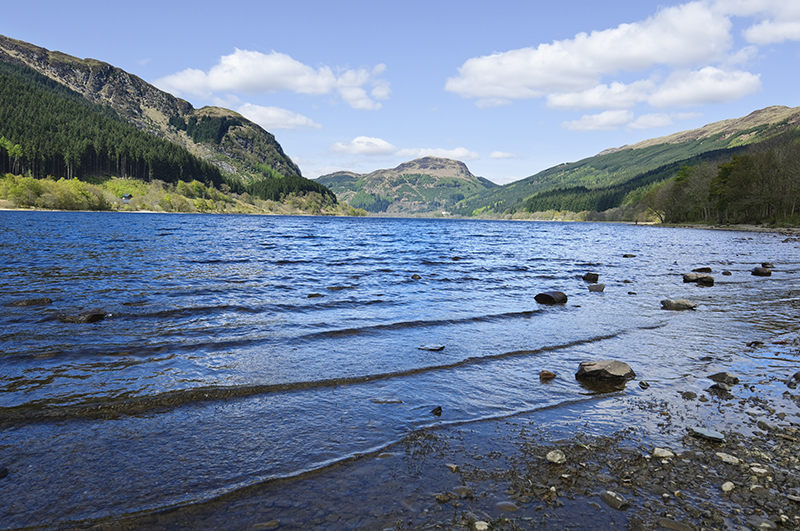 Ben Ledi and Ben Vane are popular mountains towering above Loch Lubnaig and attract many walkers. Loch Lubnaig is a small but a stunningly located stretch of freshwater, nestling between two striking mountains.

There are several visitor centres, but the flagship facility is at Balmaha, on the eastern shore of the loch, where you can learn more about the park and walk the Millennium Forest Path. I opted for the short but steep hike to the top of Conic Hill. Here I was rewarded with spectacular views over Loch Lomond, the islands and the Highland Boundary Fault Line, which cuts through the hill. To the south lay the pretty patchwork of lowland fields and woodlands, a sharp contrast to the mountains surrounding the north end of the loch. 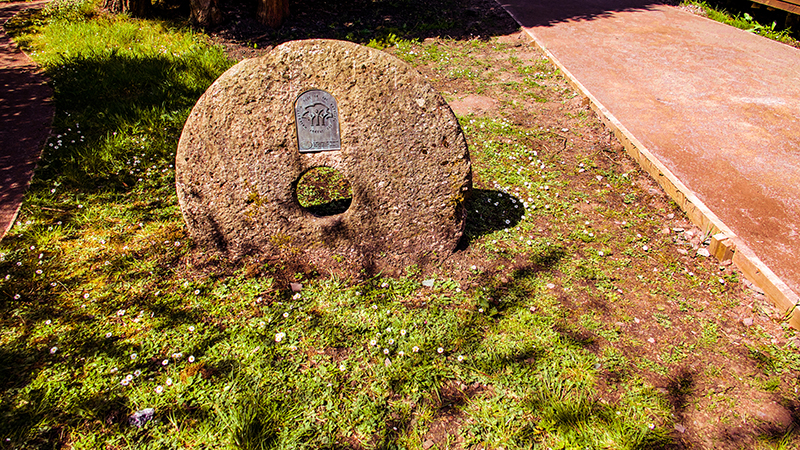 The Millennium Forest Path is a very short walk which explores the village of Balmaha. It climbs up to Craigie Fort before returning via a path cut out of the rock on the very edge of Loch Lomond.

Another day, I took the waterbus from Balmaha pier to the nearby island of Inchcailloch, the “island of old women”. It is named after a community of nuns founded here by Saint Kentigerna in the 8th century. The ruins of a later church and cemetery are the only scheduled ancient monument in the Loch Lomond area.

As part of the Loch Lomond National Nature Reserve, Inchcailloch is a haven for local and migrating birds, wildlife and flora. This peaceful place has three nature trails, including an easy woodland walk which is blanketed by bluebells in the spring, and a steeper summit path with glorious views down the loch. 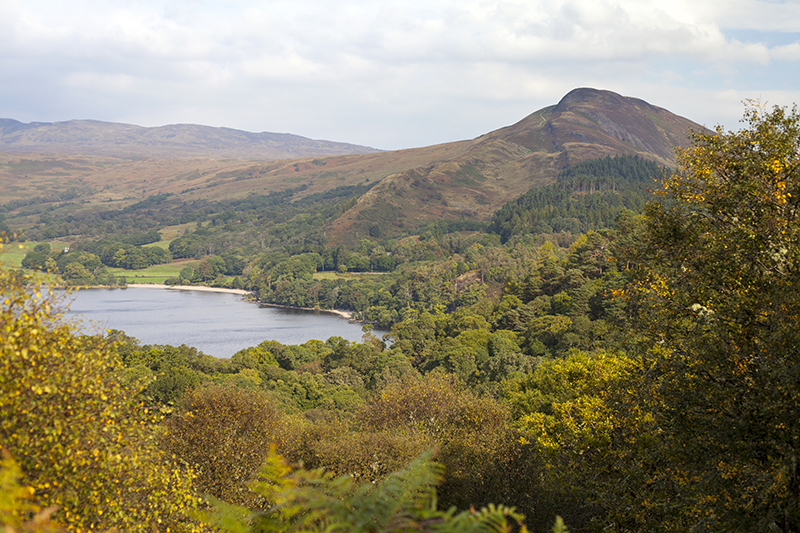 Inchcailloch is an island on Loch Lomond in Scotland. Inchcailloch may not be the largest, but it is the most accessible and probably the most beautiful of Loch Lomond's islands - it is part of a National Nature Reserve.

The Trossachs have been called “Scotland in Miniature” for the mixture of mountains, lochs, forests and fields that fill this compact region. Tourists have been coming here since the late 18th century, and it remains a popular destination. But you can escape the crowds on the many waymarked footpaths and cycle routes in the park.

Queen Elizabeth Forest Park is a good place to start. You can pick up hiking and cycling maps at The Lodge Forest Visitor Centre, along the road to Duke’s Pass. On my visit here, I got a close-up view of osprey on the park’s live CCTV, and stretched my legs with short walks to a waterfall and the red squirrel hide before taking a magical, woodland route on the Three Lochs Forest Drive.

East of Aberfoyle is Scotland’s only lake (as opposed to loch), the Lake of Menteith. The evocative ruins of Inchmahome Priory, founded in 1238, stand on an island in the lake. Mary, Queen of Scots took refuge here as a child. The wooded island is a sanctuary for wildlife, and you can reach it by ferry from March to September. The lake is also a great spot for fishing and picnicking.

Loch Katrine is the most famous loch in the Trossachs. It’s been popular since Queen Victoria took a boat trip here in 1869. It also inspired Sir Walter Scott’s poem, “The Lady of the Lake”. From Trossachs Pier on the eastern end, you can sail on his namesake steamship across the 8-mile-long loch to Stronachlachar. There is also a walking and cycle path along the northern shore, with bike rentals available at the pier.

This beautiful loch, however, is not named after a beautiful woman, as you might imagine. Its name derives from an old Gaelic word, cateran, a Highland robber. And indeed, the Trossachs were once home to the romantic Scottish outlaw, Rob Roy MacGregor.

The red-haired hero (‘roy’ is from a Gaelic word meaning ‘red’) was born in 1671, the son of a chieftain. The MacGregors were notorious reivers, or cattle raiders, in those days an honourable occupation among the clans. Rob Roy prospered as a cattle drover, taking payment from his neighbours to ‘protect’ their herds. But after he was falsely accused of stealing money from the Duke of Montrose, he fled to the hills and lived much of his life as an outlaw. 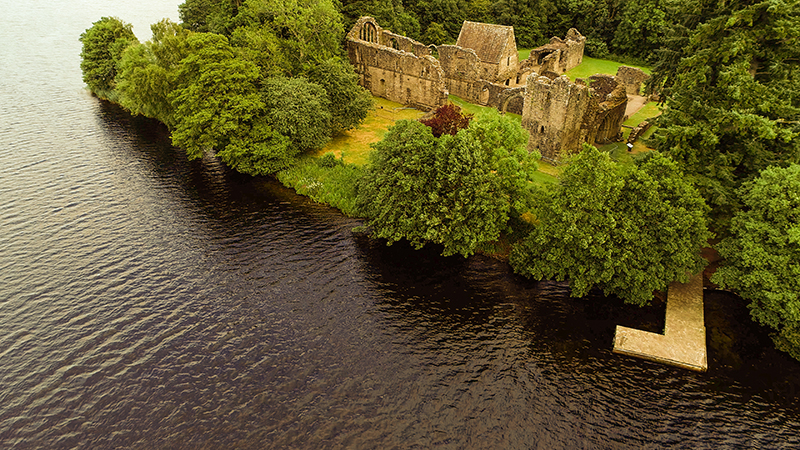 Loch Katrine is a freshwater loch and scenic attraction in the Trossachs area of the Scottish Highlands. There are plenty of things to do, to keep you busy for the day. Take one of the tours around the Loch, then grab some lunch at The Steamship café with further fabulous views of the Loch.

You can visit Rob Roy’s birthplace in remote Glengyle, at the northern end of Loch Katrine. A fun excursion is to take a cruise boat across the loch, then cycle back via Glengyle on the single-track road which connects to the bike path.

As tales of his exploits spread, Rob Roy became famous during his own lifetime. He was eventually pardoned, and died peacefully at his home in Balquhidder in 1734. Defiant to the end, his gravestone in the churchyard reads “MacGregor despite them”.

Callander is the main town of the Trossachs. Its visitor centre, housed in a former parish church with a soaring Gothic spire, is named after Rob Roy and tells his life story. It’s a romantic tale, befitting of this beautiful region and the bonnie, bonnie banks of Loch Lomond, the Queen of Scottish Lochs.

If you would like to see where your RCI membership could take you, click on the RCI Resort Directory below to search for your home-from-home accommodation.

If you own timeshare but are not a member of RCI, you could become part of our holiday exchange community today. Click on the Join RCI button below to sign up in just a few simple steps.

Still need more holiday inspiration? Then visit our new Holiday Ideas page by clicking on the button below.

'Tis The Season'... For A Winter Holiday In Scotland