Lapland offers a variety of festive fun for the whole family. Head to Finland to begin your search for Santa, and rediscover both your inner child, and your Christmas spirit.

Remember when Christmas was a'coming and the geese were getting fat and you woke up with that toe-curling, stomach-crunching feeling of almost painful anticipation? And now it's been replaced by a rush of 'must get the turkey bought', 'how many of the children's friends are coming?' and 'how many mince pies can I get away with'? Well, believe me, you can go back to the excitement of your childhood. All you need do is take a long weekend away on a winter's break to Lapland.

Lapland offers a very different winter holiday experience, so it's best to go there with a little knowledge of what to expect. The northern winter lasts for seven months, with the sun only appearing for five hours a day. Temperatures drop well below freezing, but dress appropriately and you'll be fine in the warm sun and dry air. Ski gear will keep you warm enough to enjoy this winter wonderland. If you do get cold during the day, there's always a hot sauna waiting at your resort.

Start your visit with those friendly creatures who take Santa, at extraordinary speed, around the world. You won't meet the special flying reindeer but you will get close to these half-domesticated creatures whose snowshoe-like hooves carry them lightly over the deepest snow. They're tended by the Sámi, the indigenous people who live in the area that is now divided between Norway, Finland, Sweden and Russia. For over 5,000 years, the Sámi have fished, trapped animals and led a semi-nomadic life herding reindeer. 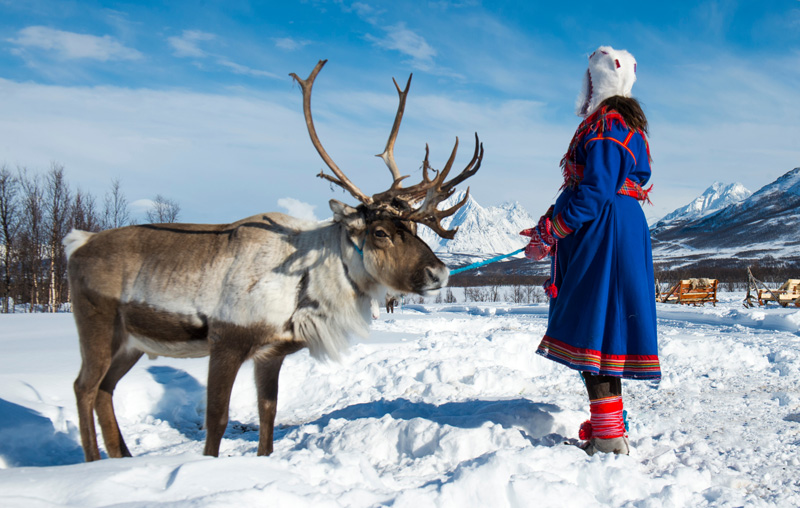 The reindeer are tended by the Sámi, the indigenous people who live in the area that is now divided between Norway, Finland, Sweden and Russia.

It's a great visit learning about the solitary life of a Sámi reindeer herder, helping feed the animals by hand, and taking endless pictures of yourselves with these very photogenic creatures. Some farms offer reindeer driving lessons, and reward your efforts with a 'reindeer driving licence'. If you're in Lapland between February and April, a reindeer race is a must-see. The best racing reindeer are legendary and run like the wind.

You could impress your children - and yourself - by driving a team of huskies. Teams of six dogs pull you along, children safely in the sleigh while you 'drive' them from the back, hoping that the speed will not hurl you from the driving seat. It's exhilarating and gives you a real sense of achievement, and the huskies and their keepers know exactly what they are doing. You could also take to a modern snowmobile and speed along as fast as a car. Mini snowmobiles offer independence to the youngest, and reassurance to their parents, as the snowmobiles are tethered around a tree. 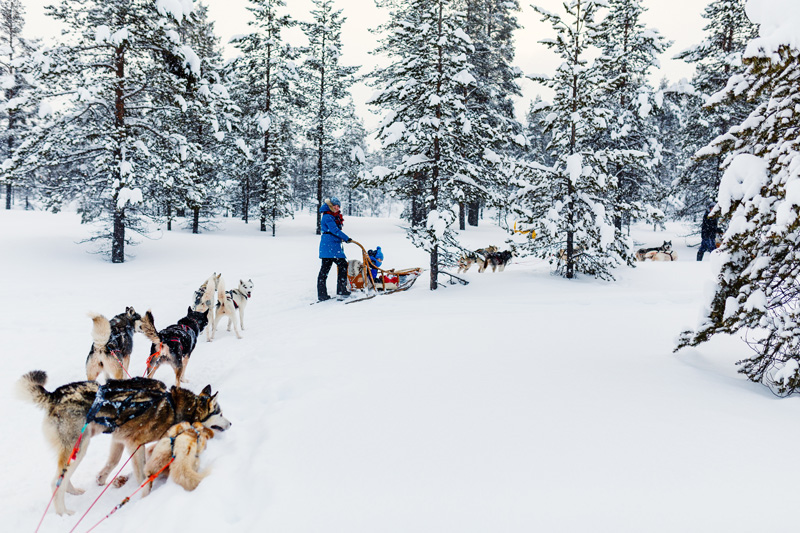 Impress your children - and yourself - by driving a team of huskies. Teams of six dogs pull you along, children safely in the sleigh while you 'drive' them from the back.

If the wilderness beckons for the whole day, a snow safari by reindeer sleigh or snowmobile takes you deep into the forest. The sun sparkles brightly on the snow and picks out ice-covered trees that look more like frozen sculptures. You come to a hut shaped like a tepee, the Sámi's Kota. Stop the reindeer or turn off the snowmobiles, and the silence is broken only by the sound of branches cracking under the weight of snow and the snuffles of the reindeer as they nuzzle the earth for lichen.The Kota's steep rooves stop the snow settling while a central hole allows the smoke out. Inside there's kindling and wood for a fire to cook sausages on sticks. They are eaten with potatoes, served with a mix of dill and sour cream. It may sound simple, but after a morning outside it makes a magnificent feast, setting you up for the ride back through the blue twilight. 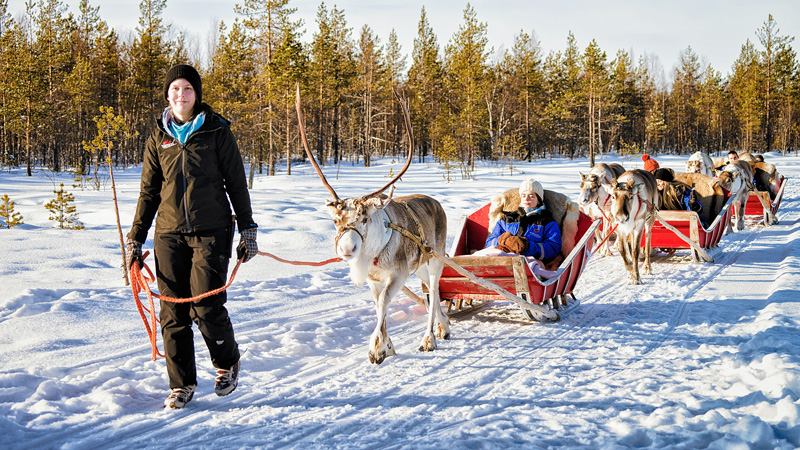 If the wilderness beckons for the whole day, a snow safari by reindeer sleigh or snowmobile takes you deep into the forest.

As every Finnish child knows, Santa lives just outside the far north city of Rovaniemi, where the frozen world of the Arctic Circle begins its path to the North Pole.

The snow-covered Santa Claus Village gleams with brightly-lit buildings. Twinkling fairy lights cover the Christmas trees marking out paths that take you past the huge thermometer showing how cold it is, past small slopes full of excited children on toboggans, and up to the Reindeer Park. A red pillar box stands outside Santa's Post Office which receives over half a million letters each year sent from all around the world.

You'll find Father Christmas himself (Joulypukki) in the Christmas House where he lives and works and, more importantly, hands out presents helped by his band of merry elves. The room is full of old-fashioned furniture with a huge map of the world and a clock that he stops for one night so he can deliver presents around the world.

Santa hasn't always lived here; his original home was at Korvatunturi Fell inside the Urho Kekkonen National Park near the eastern resorts of Pyhä, Salla and Kelorinne. The location remained secret until 1927 when Finnish radio host Markus Rautio (Finland's 'Uncle Mac'), revealed his true whereabouts. You can safely hike along well-marked trails to the three peaks of Korvatunturi Fell, but you must tell the Finnish Border Guard, as it lies next to the Russian border. 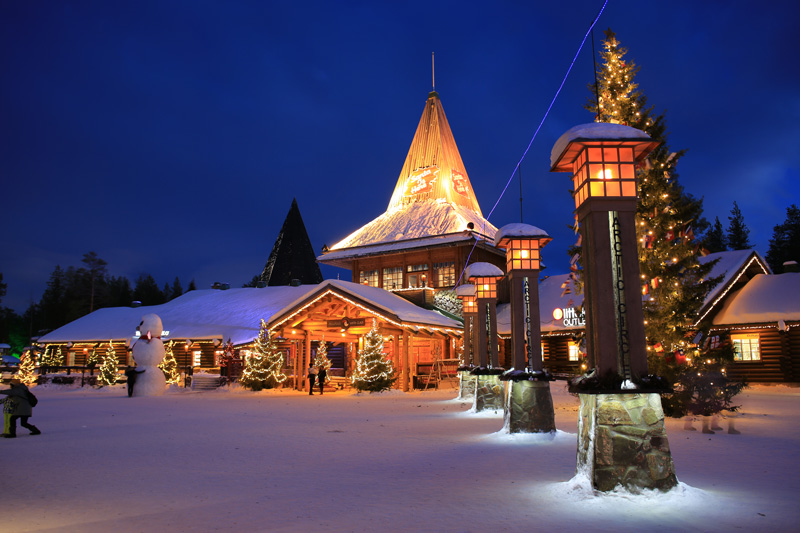 Lapland is about much more than sports and Father Christmas so, on your third day, head out for some sightseeing and shopping for items you can't find at home. In Rovaniemi, a walk along the riverside path follows the reindeer's head layout of the city designed by the Finnish architect Alvar Aalto. You're led to the Arktikum Museum and Science Centre, a modern building where the sky and river are dramatically reflected in the glass atrium. Here the story of Lapland, the Sámi way of life and their rich folklore, times of war, and more pertinently, times of climate change, unfolds in a series of exhibitions that packs a few punches about the harsh environment and the future.

The northernmost resort of Saariselkä lies just south of the vast expanse of Lake Inari, sacred to the Sámi people. In Inari itself, visit the Siida Museum, a stunning place where you're drawn into the landscape, the way of life of the Sámi and the animal life which share this part of the planet. You walk through the seasons, and will marvel at nature's sheer diversity, and leave with a very real understanding of how nature and man co-exist. 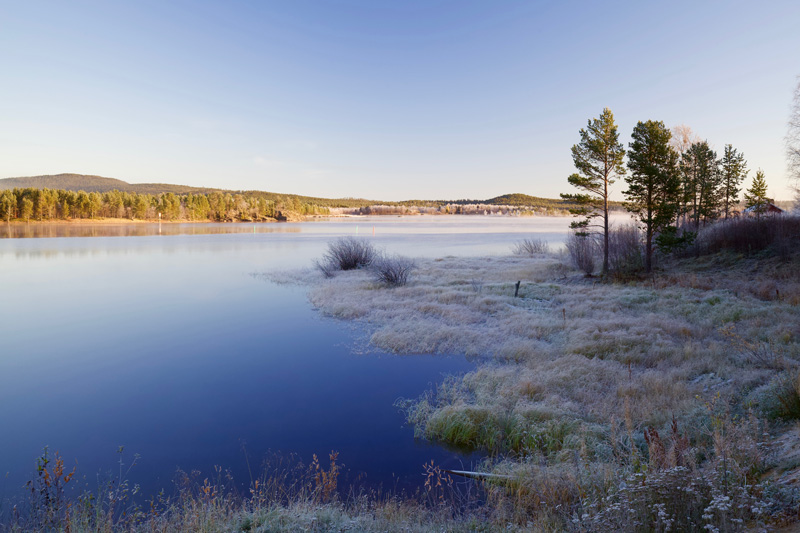 The northernmost resort of Saariselkä lies just south of the vast expanse of Lake Inari, sacred to the Sámi people.

Inari is a centre for craftspeople who cure leather to make belts and bags, carve bone handles for knives, weave brightly-coloured cloth, and plait strands of silver-tin alloy for bracelets. Who can resist those red felt slippers with upturned toes that mould to your children's feet, particularly when you've seen them being made just as they have been crafted for centuries? The hand-carved wooden platters, and jams made from wild lingonberries and the elusive cloudberry are also standouts in this destination. Lappish goods are sold in every town and resort, but make sure the ones you buy carry the Sámi Duodji certificate, guaranteeing their authenticity.

Christmas isn't Christmas without festive foods. In Finland the Joulupöytä (Yule table) takes centre stage. Feast on raw, salt-cured salmon served with sour cream and onion; herrings pickled in an astonishing variety of ways; slow-baked ham; potatoes with dill, and a selection of casseroles. Try the bright red carrot casserole and don't miss the rich, sweet, almost honeyed swede variety with a crisp crust. Desserts start with rice porridge with cinnamon, raisins and sugar, and end with joulutorttu, small sweet pastries filled with home-made plum jam. It's all washed down with beer, mulled wine and, for the brave, the Koskenkorva vodka so loved by the Finns.

There are certainly mysteries to be uncovered and holiday magic to be had out there in Europe's greatest wilderness. You just have to go and find it. 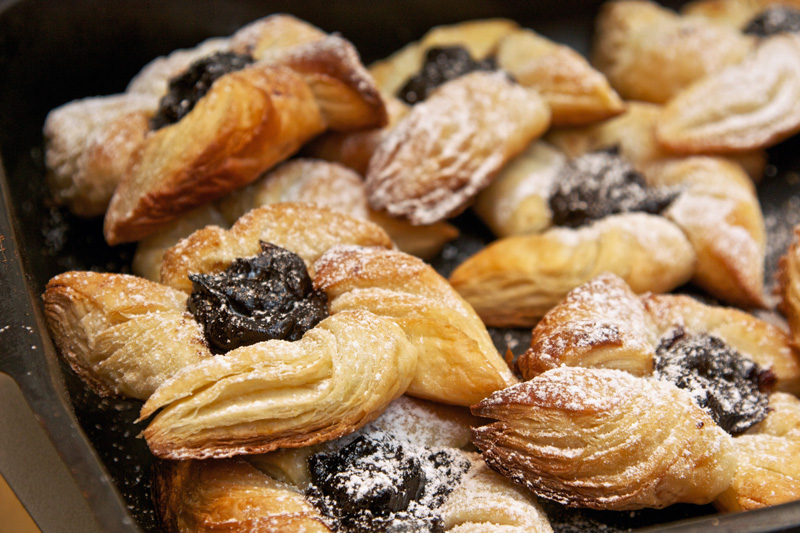 Top off your savoury Finnish main course with a delicious dessert such as joulutorttu, small sweet pastries filled with jam made from the local berries and other fruits. 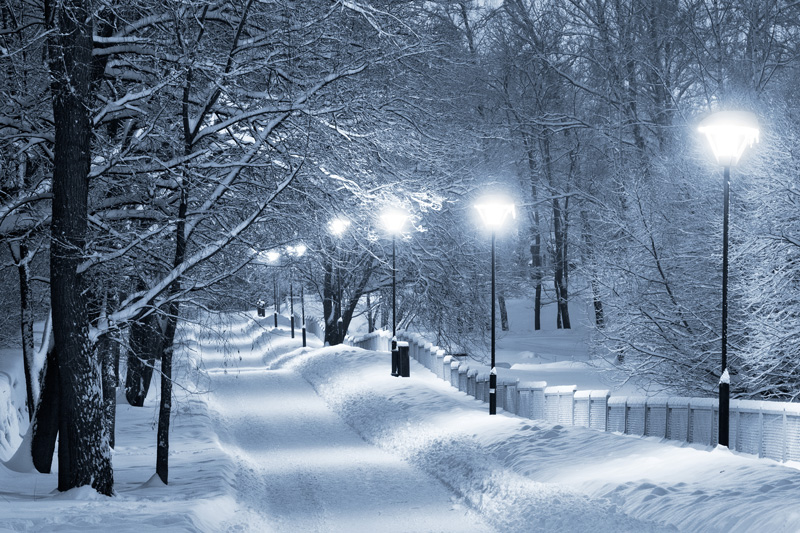 There is much magic in the fairy tale landscapes of Finland during the winter months which will enchant both you and your children, as well as creating lasting memories of a very special and unique holiday.

If you are an RCI member, click on the RCI Resort Directory button below to select your winter wonderland for a holiday with a difference. If you aren't an RCI member - you will wish you were when you take a look at where you could be calling home for your next getaway!

If you're not an RCI member and want to widen your holiday horizons, please click on the Join RCI button below and you can join in just a few simple steps.