Antalya may not initially race to the top of your city break list, but it holds its own alongside the heavyweights such as Paris, New York and Milan. As the fifth most populated city in Turkey, this south-west coastal city beautifully melds together the best of both worlds with city and coastal appeal. 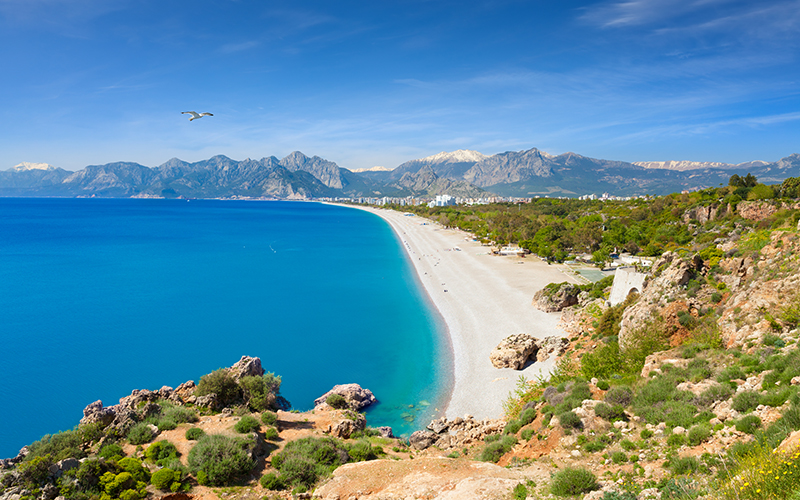 Turkey has some beautiful beaches for those who love nothing more than soaking up the rays. Konyaalti Beach is close enough to the city to split your day between sightseeing and relaxing.

Divide your time between both the sand and the city to get a healthy dose of action and relaxation and enjoy the best of both holiday worlds.

Day One: Mosques and more

The original Yivli Minare Mosque was built in the 13th century in the Old Town of Antalya, and after a number of updates throughout the centuries, it now boasts six domes and a 38-metre-high minaret tower. Beautifully decorated with deep blue tiles, the minaret is a prominent city landmark and the mosque itself is one of the earliest examples of a multi-domed mosque in the Anatolia region. 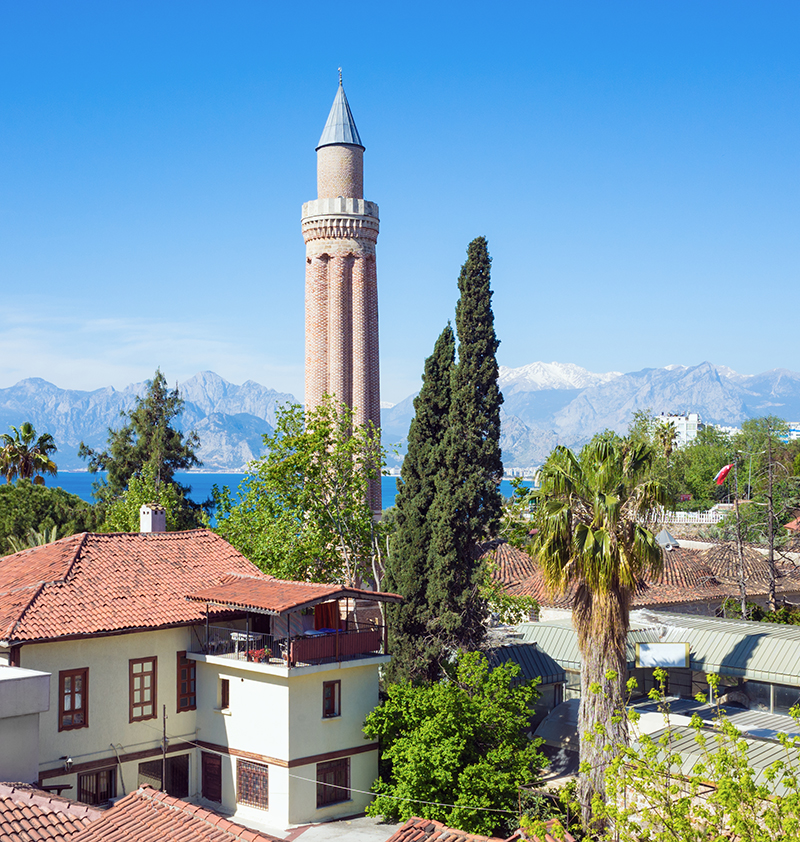 Yivli Minare Mosque was built in the 13th century in the Old Town of Antalya, and after a number of updates throughout the centuries, it now boasts six domes and a 38-metre-high minaret tower.

A ten-minute walk from here will land you in front of Hadrian's Gate, featuring elegant columns, arches and a marble frame which was built for the Roman Emperor Hadrian who visited the city in 130 AD. The city walls enclosed on the outside of the gate helped preserve the entrance. It was only in the 1950s when the walls collapsed following an earthquake, that the gate was revealed. As you walk through the main central arch you can view the original Roman pathway, which is encased in perspex so visitors can enjoy this historical site for years to come.

When the gate was uncovered, 12 bronze letters were also found, which honoured Hadrian. The letters are divided between museums around the world and private collectors. You can view some of the letters in England, at the British Museum in London and the Ashmolean Museum in Oxford.

If you have time before lunch, wander the quaint streets of the Old Town and browse the local shops selling local wares, from leather goods and jewellery to spices and coffees - oh, and Turkish Delight of course! 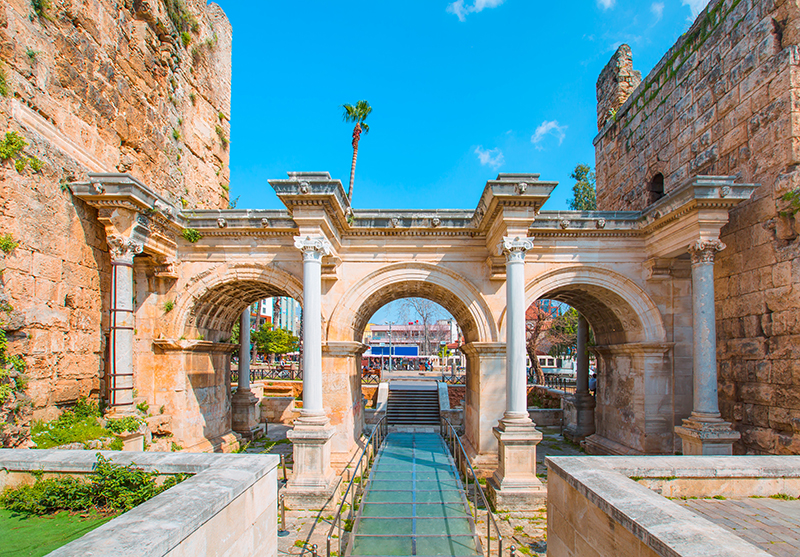 Hadrian's Gate was built for the Roman Emperor Hadrian who visited Antalya in 130 AD. As you walk through the main central arch you can view the original Roman pathway which is encased in perspex so visitors can enjoy this historical site for years to come.

You'll probably be in need of a refuelling stop, and Mado, a popular Turkish café chain on the seafront, will not disappoint on the sweet treat front. Order a coffee with a piece of Baklava, and if you cannot resist, you may want to buy some of their tempting chocolates to maintain your sugar fix throughout the day. There are also some vegan options on the menu.

If you want to delve further into the region's beginnings, spend the afternoon at Antalya Museum. It holds thousands of artefacts with a mammoth 13 exhibition halls and 5,000 works of art which collectively tell the story of Turkey's natural and human history, from pre-historic times to the Roman occupation.

If you have had your fill of history for one day, spend the afternoon at the beach to catch some of the late afternoon rays - Konyaalti and Lara are the main beaches and are most easily accessible from the city centre.

If you have restless younger ones in tow, the adrenaline-filled water rides at Aqua Park in Konakli should appeal, with rides such as the Kamikaze Drop providing enough thrills for the afternoon. The park is open from May until October. 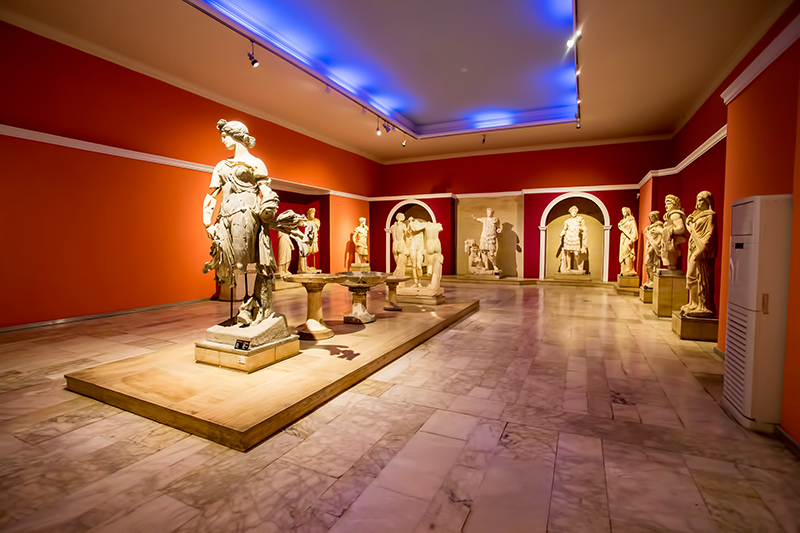 Antalya Museum holds thousands of artefacts in 13 exhibition halls and 5,000 works of art which collectively tell the story of Turkey's natural and human history, from pre-historic times to the Roman occupation.

Begin your evening with a leisurely stroll through Karaalioglu Park, an urban park scattered with sculptures and water features which are beautifully lit up when the sky is transformed with inky blues and twinkling stars.

Acclaimed for its falafel and hummus, just a five-minute walk away, is Rokka which offers diners a quirky ambience and a warm welcome, as well as an extensive vegetarian and vegan menu. The restaurant is close to Hadrian's Gate, and its laidback vibes are perfect if you don't feel like donning your glad rags.

The city has a buzzing nightlife if you're looking for a few drinks and partying, but for a more chilled-out atmosphere, the harbour promenade and beachfront is lined with relaxed bars, perfect for a nightcap before heading back to your resort. 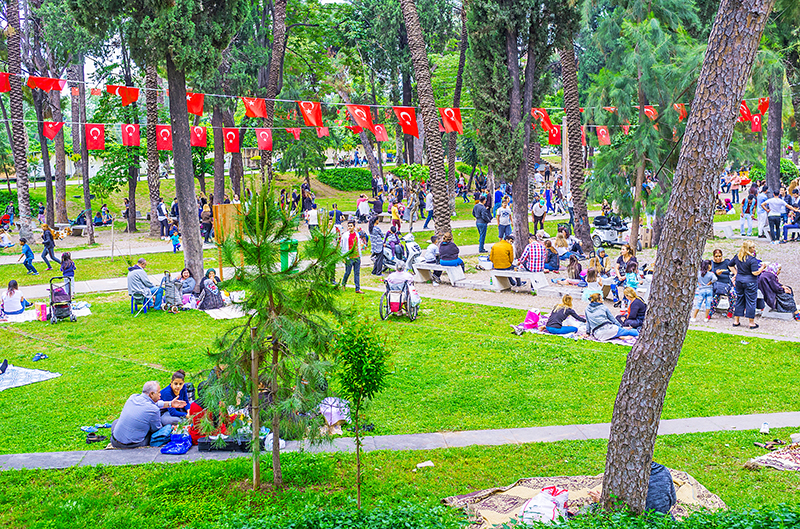 Karaalioglu Park, an urban park scattered with sculptures and water features, makes for a great place for an evening stroll, or a picnic in the sunshine.

Enjoy a late breakfast at your hotel before heading over to Lara Beach.

Perhaps one of the more unusual features on your 48-hour itinerary, Sandland Antalya is a year-round exhibition of sand sculptures. The six-mile-plus stretch is the world's largest exhibition of its kind and every year the themes are updated. Sculptors from around the world flock to the city and spend nine days crafting their artworks using 4,000 tonnes of sand!

Sculptures range from Roman Emperors to Egyptian Pharaohs, and movie characters also make an appearance, such as Captain Jack Sparrow from Pirates of the Caribbean and characters from the blockbuster hit film, Avatar.

Next up, stop by Lara market if you're visiting on a Saturday to pick up some fresh food and snacks ready for your afternoon revelling in nature. 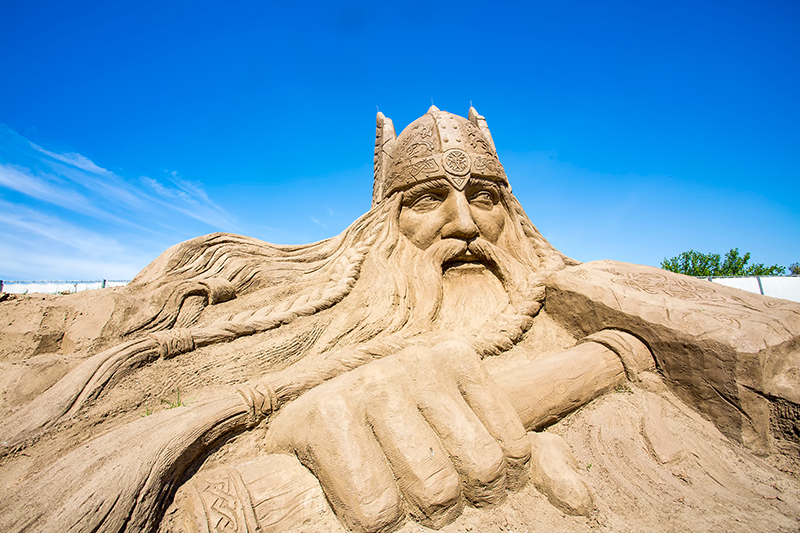 Sandland Antalya is a year-round exhibition of sand sculptures that will put your bucket and spade sandcastles on the beach to shame. Sculptures range from Roman Emperors and Egyptian Pharaohs, to Captain Jack Sparrow from Pirates of the Caribbean.

Take the short 20-minute drive to Kurşunlu Waterfalls to unearth the captivating beauty of Turkey. The falls are located at the end of a shaded forest trail, and the remote setting creates the perfect ambience for tranquillity. Look out for wildlife such as turtles and jumping trout as you wander through the forest, which is punctuated by rivers and lakes.

There are some picnic stops along the trail, so find a spot you like and dine on those delicious and fresh goodies from the market.

When you reach the waterfall, you'll be dazzled by the waters which stream across rocks into the emerald waters below. During the drier summer months, the falls are reduced to a trickle, so plan your visit according to the season to make the most of it. 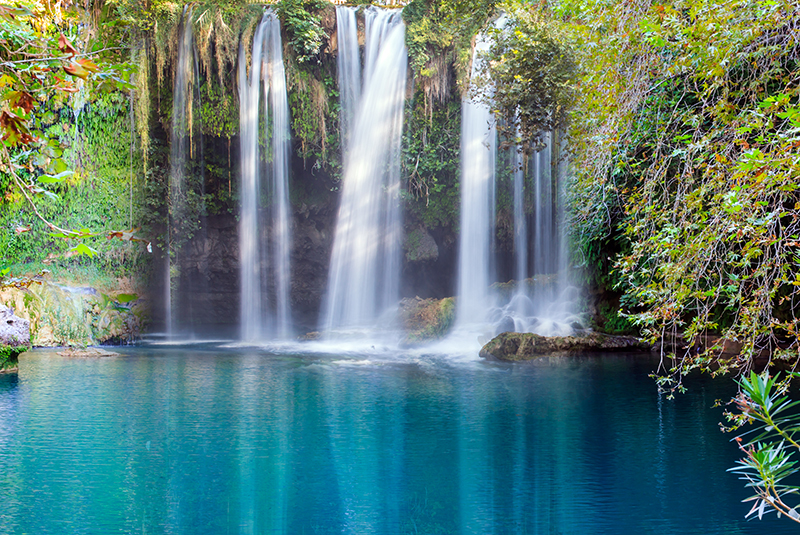 The Kurşunlu Waterfalls are beautiful and well worth a visit. The falls are located at the end of a shaded forest trail, and the remote setting creates the perfect setting for a picnic.

You may not know this, but Turkey is renowned for offering cheaper golf fees than other European countries, so if you fancy a round, head to Belek for some of the region's most beautiful greens. Sueno Golf Club is one of the newest and most ambitious additions to the Turkish golf circuit and the two 18-hole courses are just a few hundred metres from the sea. It's the Pines Course which steals the show though, from the tricky 'Rugged Valley' to the optical illusions of the final hole 'Mirage', a mid-length par four. Whatever your handicap, you're sure to have an enjoyable afternoon here.

If you're not in for the swing, how about some spa time instead? You have plenty of options in the city for a hamam experience, where you can enjoy a few hours of pure bliss with a sauna, steam bath, foam massage and an aromatherapy oil massage in gender-segregated bathing areas. 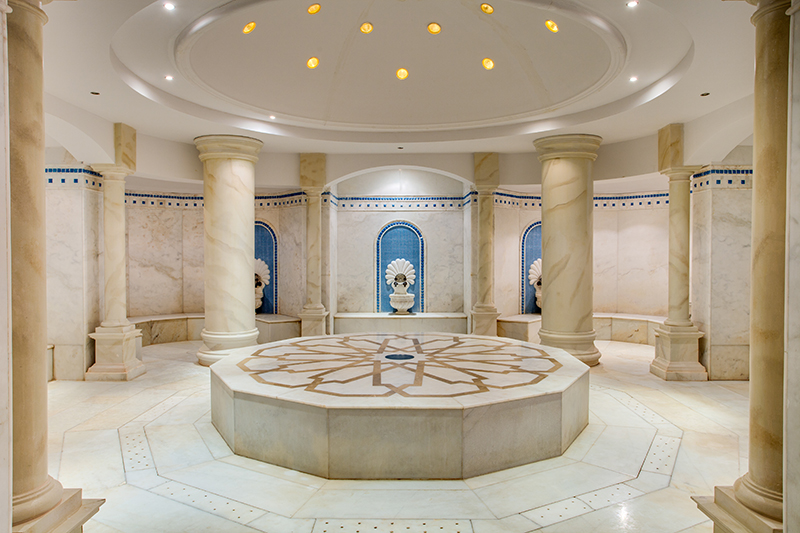 If there is one thing you must do on holiday in Turkey, it's try a Turkish bath. You'll be steamed, scrubbed and massaged and leave feeling relaxed and cleaner than you can imagine!

The port town was founded 2,000 years ago, and so the harbour is very much a central focal point for the city. So it's only right that for your last evening in the city, you visit one of the clusters of fabulous restaurants which are perched up on the cliffs and around the port.

Arma Restaurant is a firm favourite with locals and visitors, as it's so popular, you'll want to pre-book a table nearest the seafront for the best views. Visit just before sunset to toast your whirlwind adventure, before dining and enjoying the twinkling lights around the port and the rushing sounds of the waves as they roll into the cliffs. The fresh seafood dishes come highly recommended, from the hot seafood appetisers to risotto for mains, and finish off with the pumpkin dessert which has received rave reviews. 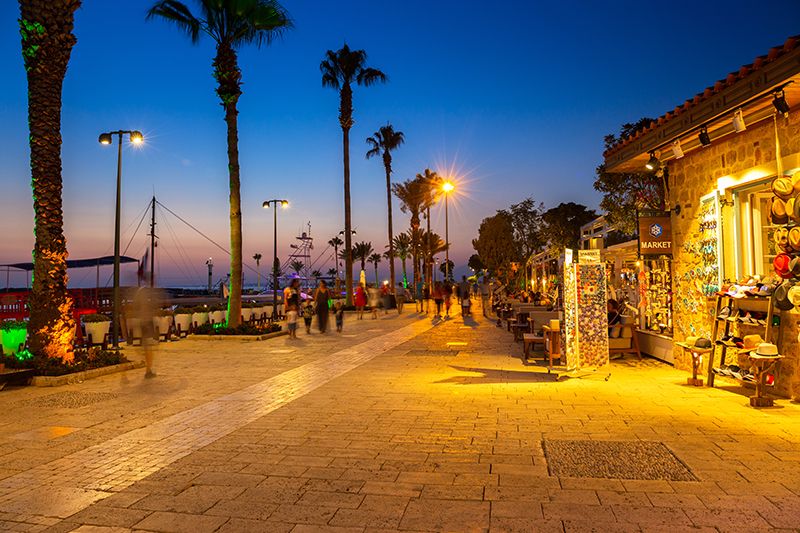 The harbour is very much a central focal point for Antalya and it's packed with bars, restaurants and cafés which are perched up on the cliffs and around the port.

Turkey is a fantastic holiday destination filled with so much history, culture and beautiful beaches - there is something there for everyone. If you'd like to explore more of Turkey, click on the RCI Resort Directory button below to select your accommodation.

If you own timeshare but are not a member of RCI, you could join our Holiday Exchange community today. Click on the Join RCI button below and sign up in just a few simple steps.

How To Make The Most Of Your RCI Membership