Fall in the Missouri Ozarks is nothing like the fireworks of a New England autumn. Instead of showy sugar maples exploding in garish reds, you get something that local folklorist Marideth Sisco calls “a glorious tweed.” Hickory, dogwood, oak and walnut trees color the hills in shades of crimson, amber, buttery gold and the muted bronze of old pennies. Another difference? No busloads of leaf peepers. The crowd is in town, distracted by Branson’s popular stage shows. But as the days turn mild and mosquitos start to disappear, fall is the best time to discover this entertainment mecca’s original attraction: the great outdoors. We’ve picked four of our favorite ways to see this wonderfully ragged country, from a barbecue-fueled back-roads drive to a gentle walk through a nature preserve.

DRIVE WAYS
The hills around Branson have been densely settled for more than a century, and a dizzying network of back roads connects the far-flung outposts. Warning: In the Ozarks, the term back road doesn’t mean a two-lane blacktop. The Glade Top Trail, one of the area’s loveliest drives, is a 24-mile serpentine stretch of gravel. It’s smooth-ish; don’t expect lane markers, service stations or much of anything besides stellar scenery.

But you needn’t go to such extremes to explore the countryside. Head west from Branson’s Country Mile (Highway 76), descending Route 13 toward Table Rock Lake. After you clear the Kimberling City Bridge, you’ll find a smokehouse heaven called Jill’s Bar-B-Que. As you leave the lake behind, the road gets twistier. Fields are so steep you’ll wonder how they were ever cleared of the dense hardwoods. For a two-hour trip, drive east on Route 86, a curvy stretch with a sudden blast of lake views as you approach Highway 65, which will take you back to Branson. Just off the highway in Hollister, stop at Vintage Paris for a glass of wine or an espresso.

If you have a full day and feel adventurous, continue east toward Forsyth, the gateway of the Mark Twain National Forest, and pass through a wonderful jumble of forested hills. The occasional country church and farm field will only remind you of how thickly forested this land remains. Be aware that many roads here, even paved ones, come with low water crossings. You can stop to plan out your route at Fat Daddy’s BBQ, in Forsyth. (Order the deep-fried pickles—trust us!) To find your way around, forget the GPS and pick up a Missouri Atlas & Gazetteer in Branson. Any road not included in this obsessively detailed wonder is probably only passable by mule.

OUTDOOR EASY
Dogwood Canyon Nature Park is a manicured 2,200-acre preserve that can be explored on foot, by bike, on an ATV, on horseback or in an open-air tram. The tram ride includes a guided wildlife tour during which you roll through pastures where longhorn cattle, elk and bison graze. A paved six-mile trail leads deep into the canyon, past scenery where every boulder and tree seems perfectly placed, and every blade of grass perfectly groomed. Halfway down the canyon, stop at Thunder Falls, a thin but mighty waterfall. Bring some quarters to plug into the discreet fish-food vending machine; the pellets draw swarms of rainbow trout splashing in the gravelly shallows. Dogwood Canyon also makes for a spectacular outdoor classroom. Fly-casting clinics meet every Tuesday, Thursday and Saturday through October.

LOCO-FOLIAGE
For the lazy leaf peeper, there’s no better option than the Branson Scenic Railway. Your only worry is arriving early enough to snag a seat in one of the three dome cars. That secured, you can sit back for the two-hour round-trip through some of the region’s most majestic and rugged terrain. How rough is this landscape? When the White River Line was completed in 1905, this section of track required 284 trestles and two tunnels to cover 239 miles. The train itself is an ad hoc collection of semi-refurbished passenger cars, tugged by an Eisenhower-era locomotive. After pulling away from Branson’s historic depot, it chugs over Lake Taneycomo through the town of Hollister (and past a few eyesore shacks).

Gradually the ravines get steeper and begin rushing by, one after the other after the other. The views change swiftly, making it feel as if the train is moving much faster than its top speed of 30 mph. While a guide doles out historical tidbits and the occasional joke, the real show rushes by your window—walls of color from the red-leafed dogwoods and purple sweetgums. Close to the end of the nearly two-hour tour, the train slows to a stop on a curving trestle above Walnut Creek, allowing an overview of the wild country you’ve just traversed.

THE STRIP RUNS TO IT
One of the best outings is right in town, or almost. The Ruth & Paul Henning Conservation Area sits at the western end of Branson and covers 1,534 forested acres. A half-mile-long paved trail meanders through the russet-colored forest and up to a clearing, or “bald” as it’s called in the Ozarks.

You descend quickly from the parking lot next to Roark Creek, and after a half-mile the land seems to swallow you up. Once on the valley floor, you hike a half-mile stretch along the Roark, one of hundreds of headwater Ozark streams. You’ll soon feel far removed from the manmade entertainment of Branson, mesmerized instead by the song and dance of Mother Nature. 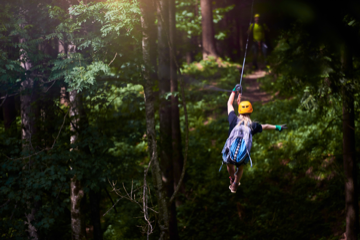 The Ozark Mountain town is a family entertainment mecca....Read More 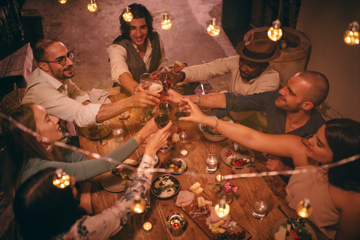 Skip the chain restaurants in favor of some real Ozarks cooking....Read More 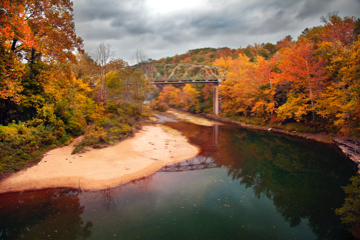 Even in Branson, the Live Entertainment Capital of the World, ....Read More