When you gaze north from the 2,330-foot-high desert lookout in South Mountain Park, just seven miles from downtown Phoenix, you can’t miss the sparkle of the Southwest’s largest city. The sun reflects off skyscraper glass and steel in a blinding glare, and that’s exactly how city planners—and most Phoenicians—prefer it. To be distractingly shiny and new is the raison d’etre in the Valley of the Sun these days, even if it’s at the expense of historic landmarks and favorite old dives.

This doesn’t mean that reinvention (or demolition) has been bad for Phoenix’s once crime-ridden downtown. After a $3 billion injection over the past several years, the area has been transformed. Tidy desert palms now stand sentinel on crowded city sidewalks beside renovated museums and new residential buildings. Busy weekend events—such as the Downtown Phoenix Public Market—have injected a foodie enthusiasm into a town once known primarily for steaks and chimichangas. And while there are still Western-wear shops and classic cowboy art, most locals prefer the edgy galleries and trendy boutiques that now inhabit the revived Roosevelt Street and Willo district storefronts.

It’s also in these neighborhoods—only a few blocks from the metro center—where history buffs have put their hearts. They’ve renovated 1920s bungalows, and the rise in population has brought an influx of shops and restaurants to nearby brick storefronts and warehouses. The revival doesn’t stop here. City parks and formerly dusty canal trails are now festooned with contemporary public art, inviting pedestrians and cyclists to wander through the warm desert nights.

Though the water-hungry, climate-controlled valley has never been a beacon of environmental stewardship, sustainability is taking hold here. A light-rail line was recently completed, and Mayor Phil Gordon has announced plans to turn Phoenix into a solar city, starting with the area’s first solar power plant. Gordon also signed a development partnership last year with Dubai, hoping to learn some of the tricks of over-the-top reinvention from those arbiters of urban desert development. So if you don’t like something on this trip, come back in a year—it’s likely to have changed.

ROOM FOR A VIEW
To orient yourself to the massive Phoenix grid and get a sense of how far things have come, hike a mountain. Despite all the development, the city still has some of the wildest parks of any major metropolis in the country. You’re likely to encounter Gila monsters, blooming cholla cactus and even tarantulas only a few miles from downtown.

If a view and a workout are both on your agenda, head straight to the top of 2,608-foot Piestewa Peak via the steep, rocky 1.2-mile Summit Trail. As you admire the stately saguaros jammed into the mountain’s face, prepare to be overtaken by gasping trail-runners.

Piestewa’s summit has fine views of the city, but turn 180 degrees to look over the rest of the Phoenix Mountains Preserve. Here, meandering trails provide a Sonoran Desert primer as they disappear into rocky washes, climb challenging hills and pass groves of palo verde and mesquite trees. You can start from the same trailhead that serves Piestewa Peak, and then choose either the easiest or the longest trail, whichever suits your mood and ability.

For big and varied wilderness, drive to the southern edge of the city to find the massive South Mountain Park. Rent mountain bikes from Cactus Adventures or saddle up for a guided horseback trip with Arizona Horses to explore this vast area. For complete immersion, take a hike—there’s a good chance you’ll sneak up on chuckwallas, zebra-tailed lizards and desert tortoises along the six-mile loop on the National and Mormon Trails into Hidden Valley. Look for 1,000-year-old petroglyphs scrawled into the granite by Hohokam Indians.

IN THE NEIGHBORHOOD
The best introduction to Phoenix’s urban revival is its residential neighborhoods. Start with a walking tour of one of the city’s first suburbs, the Willo district (just west of Central Avenue between Thomas and McDowell Roads, from 1st to 7th Avenues). Years of dedication have gone into restoring the 1920s bungalows and Spanish Revival and Tudor houses that you’ll see on your tree-shaded stroll. Continue south a few blocks to browse through Willo Historic District Antiques, with its chandeliers, period furniture and ever-changing eclectic stuff. Then duck into a Phoenix classic, Easley’s Fun Shop, for sombrero sunglasses and magic tricks.

Just a mile south, Roosevelt Street connects the formerly gritty neighborhoods between Grand Avenue and 16th Street. In the last decade, as starving artists snapped up the rock-bottom studios and storefronts, the street returned to life. You can start things off in celebratory style with an “itty bitty” vanilla spongecake layered with vanilla custard and fresh strawberries from Tammie Coe Cakes. Then glide over to MADE Art Boutique, a parrot-painted cottage selling local crafts, from natural beeswax lip balm to dazzling mobiles. And dial up your style-o-meter at the hip Bunky Boutique, where local designers showcase cool tees, shoes and more.

HIT THE DOWNTOWN
Phoenix is immensely pedestrian friendly. But if you prefer to ride, hop on the clean and easy light-rail system that shoots through the heart of downtown. To make everything that much more accessible, the city has planted “ambassadors” in popular zones—smiling folk in orange shirts who’ll happily point you in the right direction.

Start at the centerpiece of the city’s attractions, and the main reason downtown has survived at all: Chase Field, home of the Arizona Diamondbacks baseball team. During the hour-long tour of the air-conditioned stadium, you’ll learn all about its retractable roof, swimming pool (which has captured many a homer) and one of the largest high-def video boards in the country.

Back on the street, head eight blocks northwest to the Downtown Phoenix Public Market, at Central Avenue and Pierce Street. From 8 a.m. to 1 p.m. on any given Saturday, you’ll see artists, young families, retirees and hyper-stylish professionals trolling the booths to fill their canvas totes with farm-fresh produce. You can chat winemaking techniques with the vintners, buy a tub of goat cheese and watch the awkward followers of a free Tai Chi demonstration.

From here, walk north to the serene Heard Museum, newly renovated and expanded. Inside the smooth adobe building are tiny courtyards with colorful tilework, sculptures and trickling fountains, and a lovely café (try the Navajo fry bread). The huge collection includes contemporary Native American artwork and intricately crafted cradleboards from several different tribes. It seems odd to see Barry Goldwater’s extensive kachina doll collection juxtaposed with a display that explores the boarding-school “reeducation” that was forced on Native American children beginning in the late 19th century. Wherever Phoenix is going now, the Heard Museum offers a stark reminder of where it came from.

All Resorts in Phoenix & Scottsdale 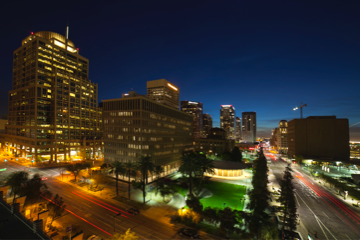 Where Culture and Creation Collide

With dozens of golf courses and spas, along with a thriving culinary and arts scene, the greater Phoenix area has something for everyone...Read More

In the shopping capital of the Southwest, modern luxury goods share the retail-space with Wild West artifacts of the past...Read More 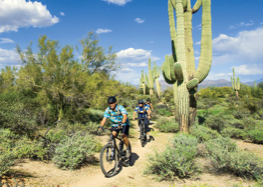 Playtime and downtime in the desert...Read More