Pretty in the Poconos

Every few years the press seems to rediscover Milford, Pennsylvania, as a great weekend escape, declaring it “cute as a button,” a “mountainside mecca” or our “prettiest county seat.” How is it possible, then, that Milford still feels undiscovered?

Milford grew up on the Delaware River as a retreat for Philadelphians fleeing yellow fever, then for the Gilded Age elite escaping New York City’s heat. Its Pocono Mountain setting appears to have protected this 19th-century outpost from the kind of development that degrades many a historic town. Milford’s downtown streets are still lined with pedigreed Victorian architecture and 72% of its real estate has made the National Register of Historic Places. It also helps that in 1965, 70,000 acres of the Delaware River Valley just south of town became a national recreation area.

Start at the Fauchere
How does one love Milford? Let us count the ways at the historic 16-room Hotel Fauchère. The hotel was opened in 1867 by Louis Fauchère, a former chef at Delmonico’s restaurant in Manhattan. In its heyday it hosted presidents (two Roosevelts, Kennedy), film and theater celebs (Sarah Bernhardt, Charlie Chaplin), literary luminaries (Ogden Nash, Robert Frost) and a steady stream of the rest of us

It took 100-plus years for Milford and its stately hotel to fall out of fashion. Some observers link the town’s relatively recent comeback to that of the hotel’s. The events of 9/11 sent New Yorkers off in all directions to consider alternatives to city living. Among those looking were Sean Strub and Richard L. Snyder, who bought the then dormant Fauchère in 2001. In 2006 they reopened it, stylishly restored. Winter at the Fauchère brings hot toddies, fuzzy blankets, marshmallow roasts and storytelling around a fire pit in the snowy garden.

Good Taste
Whenever appetite strikes in Milford, you can’t go wrong at the Fauchère. Dinner in the Delmonico Room consists of 7 to 9 courses with as many wines. More-contemporary offerings can be enjoyed at Bar Louis beneath a blown-up photo of Andy Warhol whispering into John Lennon’s ear. Sandwiches and soups are served next door at Patisserie Fauchère.

For lunch with a great view of the Delaware, try a juicy burger or a salad with sun-dried-tomato-and-Parmesan dressing at the River Rock Inn. The inn and its restaurant were dramatically rescued by Gordon Ramsay in a makeover engineered by Fox’s Hotel Hell. Two Milford outposts of New York originals offer fast-food options: Before a cross-country ski outing, head to Fretta’s Italian deli for a bowl of pasta e fagioli and a mortadella sandwich. After a morning spent rummaging through antiques in the dealer-cooperative shops around the Lumberyard, north of downtown, treat yourself to a slice or two of pizza at Bronx-based John’s of Arthur Avenue.

History Buffing
Don’t miss seeing the spectacular summer château Grey Towers. Designed by New York Gilded Age society architect Richard Morris Hunt, it was built in 1886 for James Pinchot, a New York City wallpaper manufacturer, and his wife, Mary. Their son Gifford lived here with his own family between stints as governor of Pennsylvania and as the first U.S. Forest Service chief in his friend Teddy Roosevelt’s administration. His environmental leadership earned him the title Father of the Conservation Movement in the United States.

Grab a copy of the National Register of Historic Places Milford Walking Tour (available around town for $1) and stroll downtown streets chockablock with restored buildings. It’s only a fraction of the 400 structures that make Milford an architectural treasure.

Shopping the ‘T’
In the T-shaped downtown historic district, you can hit every shop or gallery of note in half a day. Books & Prints at Pear Alleydraws you into its library-scented room of rare books and heritage editions. Expect to come upon shelves bursting with the prolific wit of P.G. Wodehouse or Boswell’s Life of Samuel Johnson circa 1900. Antiques lovers will lose themselves in the shops and galleries occupying Forest Hall, the former post office building designed by Calvert Vaux, of Metropolitan Museum of Art fame.

At Elizabeth Restucci’s Antiques, more mint-condition vintage books keep company with furniture and 17th- and 18th-century estate jewelry. Upstairs in the capacious former studio of Hudson River School artists, browse in Forest Hall Antiques, where American, Chinese and European furniture and objects are displayed along with the occasional exquisite Mexican pot and a Jetsons-era oval television. Tucked into a corner here is Return to Fashion, crammed with vintage women’s clothing and accessories. Downstairs, shop for home furnishings, such as handsome striped linen dishtowels, at the cheery and sophisticated Upriver Home.

Arts and Letters
Works by members of Milford’s substantial artist community can be seen at Artery, where painters, sculptors and photographers share space in an airy storefront. It’s just the place to find your own Delaware River Valley landscape. Next door at BlueStone Studio, potter David Greenbaum often texturizes his bells, bowls and vases with grasses and other natural materials before firing them. You’ll also find work by other ceramists and lively paintings by Joann Wells Greenbaum. Nearby, the Forge Studio & Galleryhosts monthly shows of contemporary art in front while owner Philip Rachelson paints in the back. The restored Art Deco Milford Theatre has a prominent place in Milford’s cultural life, presenting a range of films, theater, and local and international music year-round.

Into the Woods
Come wintertime, the National Park Service grooms trails for snowshoers, hikers and cross-country skiers in the Delaware Gap National Recreation Area. Head to the Cliff Park Site and parts of the McDade Recreational Trail, along the river. If you’re lucky you’ll see bald eagles: Major conservation efforts promoting clean water and healthy fish and small prey have brought the country’s largest winter population of the eagles to the Delaware River Valley. And late-January visitors to Milford will encounter huge ice sculptures and ice-skating shows at the Winter Lights Festival (winterlightsfest.com). Take a spin on the Village Green ice rink, and soak up Milford’s charms. 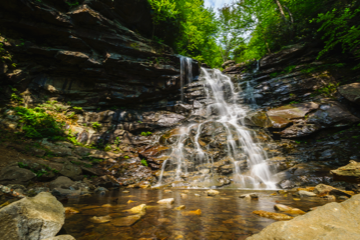 The Poconos for the Kids

Though newlyweds continue to toast each other with champagne... Read More