Mexico City is a study in contrasts. There’s crazy honking traffic, busy shopping streets, and 22 million people moving throughout the metro area. But Mexico’s capital is also a place of peace and tranquility, where people welcome you with a smile. Let’s discover the magic of this colorful city.

Begin your Mexico City vacation at the National Palace in Mexico City’s beautiful Zocalo Square, where an amazing mural provides a poignant introduction to the country’s history. “The Epic of the Mexican People” was painted between 1929 and 1935 by three muralists — Diego Rivera, José Orozco, and David Siquieros — and depicts the early culture of the Aztecs as well as battle scenes from the Spanish conquest. More murals can be found throughout the city, and each one tells a different story. 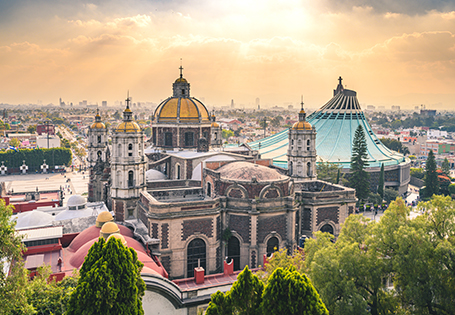 Adjacent to the main square you’ll also find the ruins of Templo Major, a pyramid built in pre-Hispanic times. Excavation of the site began in the late 1970s, and to date 7,000 pre-Hispanic objects have been found. Spanish conquistadores destroyed sacred sites like this one during their conquest and replaced them with churches and cathedrals. Near Templo Mayor stands the imposing Metropolitan Cathedral, one of the oldest churches in the Western Hemisphere. It was begun in 1525, took over 200 years to construct, and features a variety of architectural styles.

Another important Mexico City attraction is the Basilica of Our Lady of Guadalupe, the world’s most visited Catholic pilgrimage site. The shrine attracts 11 million people every year, seven million of whom come in December during the saint’s feast day, many walking on their knees to pay homage to Our Lady of Guadalupe. You’ll see images of the saint elsewhere throughout the city.

A Multitude Of Museums

Museums are a popular Mexico City activity, and a favorite is the Museum of Popular Art, whose colorful exhibits show how Mexicans incorporate art into daily life — think beautifully engraved and painted pottery — as well as their religious beliefs.

Another popular museum is the Museum of Anthropology located in Mexico City’s 1,700-acre park, Chapultepec. It’s easy to get lost among the 23 exhibit rooms as you view the multitude of artifacts, including giant stone heads from the Olmec civilization (circa 900 BC); the Aztec Sun Stone, a calendar wheel carved in the 1500s; and many Mayan treasures.

Don’t miss Casa Azul, one of the top Mexico City attractions — once the home of Frida Kahlo and now a museum devoted to this popular Mexican artist. She painted many self-portraits, characterized by her fixed gaze, indigenous attire, strong brushstrokes, and emotional energy.

Explore Mexican gastronomy during a food tour, such as the one offered by Eat Mexico. You’ll visit markets and sample shrimp broth, octopus and crab tostados, fried grasshoppers, exotic fruits, and more. A food tour is a tasty way to learn about Mexico, its people, and their love affair with food — a must for any Mexico City vacation.

Plan a day trip to the pre-Hispanic archaeological complex called Teotihuacán, located about an hour north of Mexico City. This UNESCO World Heritage Site was discovered in the 1800s, and archaeologists are still uncovering its mysteries. Covering eight square miles, the city features a main avenue that connects its buildings, including the Pyramid of the Moon and the Pyramid of the Sun, the largest structure in Teotihuacán. Experts believe it was home to 200,000 people during its zenith (400-500 A.D.).