10 Best Places To See The Northern Lights In North America

Experiencing the Aurora Borealis, aka the Northern Lights, is at the top of many travelers’ bucket lists — and for good reason. Although the captivating phenomenon is most commonly associated with places like Norway and Iceland, you may not have to travel as far as you think to catch a glimpse of the cosmic colors. In fact, you may be able to spot them from your own backyard. Here are some of the best places to see the Northern Lights in the U.S. and Canada — and when.

Where To See The Northern Lights In The United States

Where To See The Northern Lights In Canada

8. Yukon
Where: Whitehorse
When: September – April

10. Nunavut
Where: Iqaluit
When: October – April 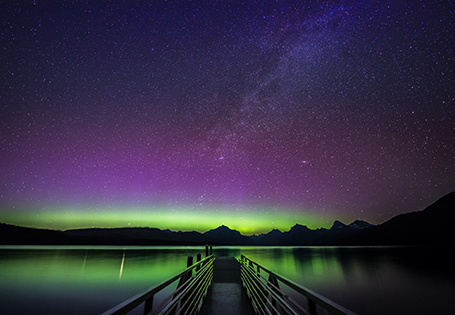 Conditions To Keep In Mind To See The Northern Lights

Wherever you’re aiming to see the Northern Lights, it isn’t all about location, location, location — timing and conditions are just as important. Clear, cloudless skies are ideal, so head out of the city to avoid excess light pollution. In most regions, the best time to see the Northern Lights is after sunset with peak viewing opportunities around midnight, so be prepared to tap into your inner night owl.

Although cold weather and the Northern Lights seem to go hand-in-hand, it doesn’t have to be cold outside to get the best view. This misconception most likely stems from the fact that the Northern Lights are most visible during the winter season due to long hours of darkness. In most locations, September through March is the best time to see the show; however, depending on the region and conditions, it can sometimes be seen during April and August. The Aurora Borealis is technically active year-round, but as a general rule of thumb: The darker the sky the better when viewing with the naked eye.

Travel Tips For The Best Views Of The Northen Lights

Like much of nature, the Aurora Borealis can be highly unpredictable. No matter how perfect the night, catching a glimpse of the lights is never guaranteed, but chasing them can be half the fun. With a little knowledge, a sprinkle of patience, and a dash of luck — it’s only a matter of time before you experience nature’s light show for yourself.