Slip away from the town’s main stretch to find secluded.... Read More

As our writer discovers, this Australian city has become a haven.... Read More

Long and illustrious, the life of Pablo Picasso was in many ways unlike that of the typical turn-of-the-century artist. He lived comfortably and passionately, often in the public eye—his trysts and mistresses fueled much of his creativity. Picasso was undeniably a celebrity in his waning years, and his life was meticulously documented by his scorned lovers and adoring students. We take you inside his world, from his birthplace of Málaga, Spain, to his bohemian period in Paris and his final years, in Provence.

EARLY YEARS IN MÁLAGA
Born in Málaga, under the warm glow of the southern Mediterranean sun, Picasso was the child of an art teacher, and showed an incredible capacity to transform the canvas early on. His hometown was his first subject—his first love—and fleeting images of the industrial city would forever cast an indelible impression on his work.

The city’s biggest influence on the artist’s work, however, may have been the enormous arena near the docks. Built in 1874 in a neo-Mudéjar (new Moorish) style, the Plaza de Toros de La Malagueta hosts elaborate bullfights from April to September, with daily bouts during the height of summer. As a child, Picasso was taken by his father to many matches, and these frenzied scenes make up some of the artist’s first renderings, at the age of 9, like Le Picador (1890). Soon after, Picasso’s father received a position at an art school in the north of Spain and the family moved, never to live in Málaga again. 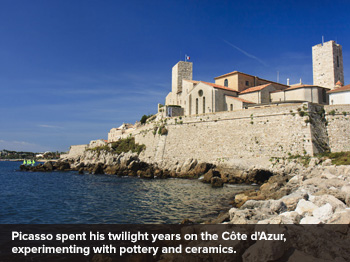 BOHEMIAN PARIS
An obvious prodigy, Picasso attended art school in Barcelona before seeking a career in Paris at the turn of the century. He followed many of his intellectual contemporaries to the neighborhood of Montmartre, where the rent was cheap and studio space expansive.

Once solidly working-class, the hill that crowns the city was already home to artistic luminaries, such as Renoir and Toulouse-Lautrec. Picasso captured the quotidian—Street Scene (1900)—and entered his acclaimed Blue Period after the suicide of his close friend Carlos Casagemas. It was here, however, that Picasso spent what he would later refer to as the happiest years of his life. You can visit some of the places the artist frequented during this period, such as the Moulin de la Galette, where he attended spirited soirées, and Au Lapin Agile, where he traded sketches for meals. And walk by Le Bateau-Lavoir to see the building in which Picasso rented the fetid apartment where he birthed the Cubist movement with the African-influenced Les Demoiselles d’Avignon (1907), largely considered the first proto-Cubist work.

As soon as the Montmartre area had garnered enough bohemian buzz to become a magnet for bourgeois wannabes, Picasso decided to jump ship in search of a new neighborhood across the Seine. He settled on the Saint-Germain district and set up shop along the quay at 7 Rue des Grands Augustins, where he spent about 20 years in an eccentric house that, according to Picasso, was “full of literary and historical ghosts.” It is fitting, then, that he created Guernica (1937)—an antiwar painting haunted by the specters of violence—in that mysterious atelier. During this time he met his first wife, Olga Khoklova, a ballerina 10 years his junior, though he found many mistresses at the nearby cafés and bars.

FRENCH RIVIERA TWILIGHT YEARS
The lure of the sea called Picasso back to the Mediterranean in his later years, when he became a family man with then girlfriend Françoise Gilot. They had two children, Claude and Paloma, in the late 1940s and lived in the hills only a few miles from the shore.

Known for its soft, malleable earth along the azure coast, the French Riviera is, artistically speaking, a haven for potters and ceramists, thanks to the endless supply of material underfoot. Picasso lived in the hamlet of Vallauris, where he expanded his work to include dishware and continued his study of the female form by bending wine jugs into various shapes of curvaceous women. He also created one of his only public works for the township—Man With a Sheep (1943), which proudly sits in the Place de l’Eglise.

Although ceramics dominated Picasso’s creative output toward the end of his life, his favored artistic weapon remained the paintbrush, and he spent countless hours along the sea, transfixed by the Côte d’Azur’s ethereal light. He lived for many years in Cannes at Villa la Californie with his last wife, Jacqueline Roque, where he’d paint from the window.

In Picasso’s final decade (he lived to 91), he and his wife retreated to a more private villa in nearby Mougins. He began painting bullrings and elaborate toreadors anew, visiting the Roman fighting ring in the medieval town of Arles (more famously associated with Van Gogh). Scholars believe, however, that he was depicting his beloved arena in Málaga, which he had left behind so many years before. 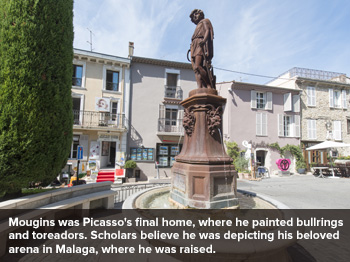 Guide to Picasso Exhibits:
The products of a prolific career spanning eight decades, Picasso’s works can be found in almost all the major art museums across the Western world—and even a few in Asia. The following exhibits are dedicated to his works and chronicle the varied phases of his colorful life.