Millions in the United States know Banff National Park as the quintessential Canadian Rockies summer destination. But Banff is fantastic in winter, too. And getting to this mountain wilderness is remarkably easy, thanks to its proximity to Calgary, 90 minutes west. Set in the Canadian Rockies, 2,500-square-mile Banff was Canada’s first national park. The place bustles with visitors from all over the world during the short summer season. Come winter, far fewer people travel the park’s well-tended roads or hit the slopes at—and here’s the best part—the 3 alpine ski areas high in the heart of its winter-wonderland scenery. 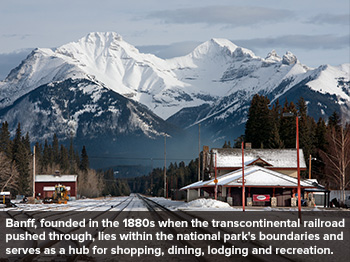 BANFF AS SKI BASE
The town of Banff, founded when the transcontinental railroad pushed through, in the 1880s, lies within the national park’s boundaries. It is also home to the park’s headquarters and hums with activity year-round, serving as a hub for shopping, dining, lodging and recreation. A popular local ski area, Mount Norquay, lies just north of town. But a short trip down the Trans-Canada highway leads to the 2 larger destination ski areas: It’s 14 miles to Sunshine Village and 38 miles to Lake Louise. 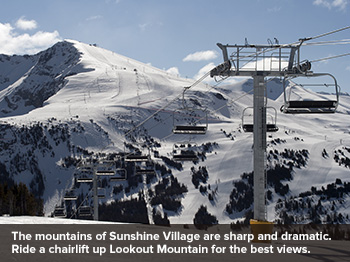 SUNSHINE VILLAGE
In the 1920s enterprising outdoorsmen leased a plot of land from the nascent park service, built a small ski lodge high in an alpine meadow and greeted adventurous guests who arrived on skis, on horseback and, later, on buses that often got stuck on a long access road.

Even today arriving at Sunshine Village feels like an adventure. The resort greets you with little more than a string of gumdrop-colored gondolas that ascend a rocky seam and disappear from sight. When the door slides open at the upper gondola station, about 17 minutes and 1,642 vertical feet later, now you’ve arrived. The Sunshine Mountain Lodge, along with a handful of bars and restaurants, stretches out across the only flat land around. Other than that, it’s all national park—no houses, no development whatsoever.

A starburst of chairlifts radiates up to a ring of peaks above. Flakes here fall deep and dry, and the ski season stretches well into May. The Great Divide chairlift offers the best vantage point, climbing another 1,450 feet up Lookout Mountain. The mountains look sharp and dramatic, chiseled like arrowheads and canted like children’s blocks. The pyramid of Mount Assiniboine, “the Matterhorn of North America,” rises above them all.

Far below, the village is tucked amid the resort’s 3 terrain areas. Mount Standish wraps behind the lodge, a broad apron with relatively gentle runs along its outer flanks and tree-filled gullies in between. Goat’s Eye Mountain jacks up in steep pitches then flows into glades and some cruisers down below.

Lookout Mountain is the crowd pleaser—mostly long, above-tree-line open slopes that make the most of the views and eventually coast into the village. By late afternoon, guests are soaking up the last rays, enjoying après at the Mad Trapper’s Saloon and heading for the billowing steam of the Sunshine Mountain Lodge hot tub. Soon the chairlifts and gondola purr to a halt. The apricot glow of sunset begins to paint the gunmetal peaks. And visitors ski down to the parking lot and the rest of civilization via one long, mellow trail.

LAKE LOUISE
The Top of the World chairlift isn’t even the highest lift at Lake Louise. But you’ll forgive the hyperbole when you coast off the chair onto an exposed ridge, face-to-face with a saw blade of wild peaks. Across the Bow Valley, to the west, snow makes Mount Victoria look like a fancy wedding cake, and a ribbon of glacial ice squeezes downhill between the surrounding mountains. Château Lake Louise perches like a dollhouse at the edge of the glacial lake, its famous peacock-blue waters hidden under a skim of ice in winter.

You could stand here for a long while basking in what is arguably one of the most scenic ski areas in the world. But there’s skiing to be done—4,200 acres of it, in fact. More than 50 runs flow down the front side, from broad cruisy arcs to narrow slots slicing through the evergreens. The Men’s Downhill Run, a regular on the World Cup tour, snakes down on the right.

On the backside of the ridge lies an even more challenging string of bowls, some open and exposed, others stippled with larch glades. (The Summit platter lift, topping out at 8,650 feet, reaches the highest and hairiest stuff.) It all funnels into a gully and wraps around to a third area, called Larch, which seems to be a sampler platter of everything: cruisers and cliffs, open bowls and trees.

It gets your head spinning, this kaleidoscope of terrain facing every which way. With so many different exposures, you can sniff out decent conditions no matter what the wind and sun are doing. And with at least one beginner run drifting down from every lift, groups can ski the whole mountain together even if their skill levels differ. Lake Louise somehow feels precision-engineered and utterly wild at the same time. Its day lodges (the only development at the ski area proper) strike a balance too. At the new, mid-mountain Whitehorn, they satiate lunchtime hunger with homemade bison burgers, game platters and cheese fondue.

Since Lake Louise has long been a favorite of Canadians, it’s perplexing that a ski area this big, this good and this unspoiled is largely overlooked by U.S. skiers. Maybe the simple fact that it lies within a national park keeps it hidden in plain sight. But at the end of the day, kicking back at the base amid the gorgeous hand-peeled logs in the Lodge of the Ten Peaks—well, you’ll probably be content to keep it that way.

The majestic site of these jagged cliffs are a must-see destination, .... Read More

Everyone knows that Niagara Falls is way more spectacular when .... Read More

Some of the earliest visionaries of American skiing staked out .... Read More