Grand Cayman’s tax shelter status is no secret. But if you think staying cozy with their cash is what keeps most people on this 22-mile-long island content, think again. The largest of the three islands in the Cayman chain, just south of Cuba and west of Jamaica, offers a worldly distillation of the Caribbean and European good life. Come for some of the northern hemisphere’s best snorkeling and diving, a dining scene that rivals the diversity of Miami’s and the chance to experience an Old Caribbean atmosphere. “It’s a sophisticated little island,” says Mike Dill, an expat who calls Grand Cayman home (almost half the 50,000-plus population hails from elsewhere). Wherever you go, count on plenty of input from proud locals and transplants on the best spots to eat and play.

ALL ABOUT WATER
“That was epic! Can we do it again tomorrow?” This plea came not from an 8-year-old boy but from the boy’s father, at one of Grand Cayman’s most famous attractions, Stingray City. It’s an expanse of chest-deep water over a sandbar a few miles out to sea, where dozens of gigantic southern stingrays congregate daily.

According to local lore, the rays were first lured to this spot in the early 1900s, when fishermen would clean their catches at sea instead of bringing the fish onto the mosquito-infested land. (Back then, mosquitoes swarmed the island in clouds thick enough to suffocate cattle, or so the story goes.) Now it’s squid treats and human interaction that keep the stingrays coming.

“The rays brush their wings past your legs, much like a cat trying to get attention,” says James Grainger, a captain with Red Sail Sports. “It feels very soft and feathery.” Visitors may initially be wary, Grainger notes, but after 5 minutes they’re swimming off in pursuit of a stingray snuggle. Guides help you hold the rays and pose for photographs, if you’re so inclined. 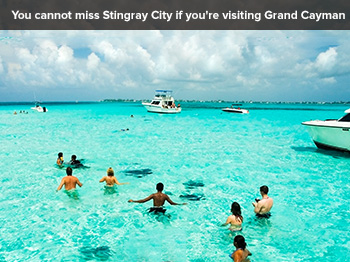 Grand Cayman’s legendary walls draw scuba divers for some of the Caribbean’s most impressive diving. But there are plenty of snorkeling options. The 250-foot-long Kittiwake, a U.S. Navy ship that was sunk in 2011 to form an artificial reef, rests upright in 65 feet of water just offshore. Parts of the ship are so close to the surface that snorkelers can peer into smokestacks and cargo holds.

Get a drier look at Cayman marine life on a day- or nighttime submarine trip. Atlantis Submarines takes you to reefs 100 feet down. Or watch fish action from above the water during the nightly tarpon feedings at Rackam’s Waterfront Bar & Grill in George Town, the capital. When the dinner bell rings at 7:30 p.m. sharp, dozens of the torpedo-like fish are already lurking below. 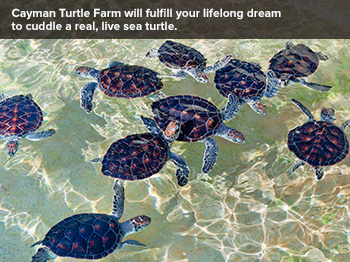 Grand Cayman’s most popular land-based attraction is the Cayman Turtle Farm. It’s not for everyone: About 7,000 sea turtles, mostly green turtles, live here in cement pens and are bred in captivity. Some are released into the wild to bolster local populations; others are sold for their meat to island restaurants (sea turtle has long been a Cayman delicacy, but it’s illegal to hunt them in the wild). The farm feels a bit like a theme park, but there’s no denying the joy you’ll see when children hold a yearling sea turtle or snorkel in a lagoon stocked with tropical fish.

AWAY FROM IT ALL
“All roads lead to Rum Point,” says Walter Findlay, a Scotsman who heads operations at Red Sail Sports. “People exploring the island always end up here.” He’s referring to the island’s northernmost point, a drive of about an hour from Seven Mile Beach. It’s home to a perfect sweep of powdery beach and turquoise water that barely laps above your thighs even a good hundred yards out. Families come here to relax and snack on conch fritters at colorful picnic tables under the palm trees. Rum Point’s name allegedly comes from the rum barrels that washed ashore during the Caribbean’s buccaneer days. Tours to Stingray City depart from the pier here.

For something different, you can head out with a guide on a Jet Ski tour to explore mangrove swamps and snorkel on the reef among sea turtles, stingrays and tropical fish. (Red Sail Sports offers these outings, too.) At Starfish Point, you can pose for a photo with enormous Caribbean starfish that tickle your fingers.

End the day back under the palm trees with a Mud Slide in hand. “No mixers or ice cream in this drink,” says Findlay of the cocktail, reportedly invented here. “Strictly Irish cream, Kahlúa, vodka and ice.” It’s a simple recipe that’s decidedly in keeping with this sophisticated corner of the Caribbean.

Get an authentic taste of island life in Montego Bay..... Read More

Making a Splash in the Caribbean

How to maximize your fun in St. Lucia, Jamaica and more..... Read More