Musée d’Orsay
Paris
Degas’s ballerinas, van Gogh’s Starry Night Over the Rhone, Cézanne’s still lifes—all are on display at the premier museum of Impressionism in France, if not the world. It’s located in the Beaux-Arts former Orsay railway station, across the Seine from the Tuileries Garden, and retains the station’s original soaring glass ceiling and great hall. 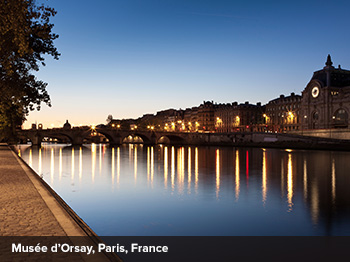 Getty Center
Los Angeles
Clad in Italian travertine, this Richard Meier–designed complex in the hills of Los Angeles affords views stretching to the Pacific Ocean. To get here, either walk or take a tram up the steep slope from the parking lot. Within its airy pavilions you’ll find Impressionist paintings by the likes of Édouard Manet and, scattered around the estate, sculptures by such greats as Joan Miró and Isamu Noguchi.

Art Institute of Chicago
Chicago
Home to such paintings as Grant Wood’s American Gothic, the Art Institute of Chicago is itself a masterpiece. The 1893 Beaux-Arts building is connected to a Renzo Piano–designed wing by a gallery set over railroad tracks. Inside is a collection of Impressionist and post-Impressionist art; 20th- and 21st-century works, including Edward Hopper’s Nighthawks; and Marc Chagall’s stained-glass windows.

Metropolitan Museum of Art
New York City
The Met is the largest museum in the western hemisphere, having a collection of more than 2 million items spanning antiquity to the present. More than 6 million people annually pass through its galleries. Its Egyptian collection showcases the Temple of Dendur (c. 23–c. 10 B.C.), while European paintings include works by Degas, Rembrandt and Vermeer.

Whitney Museum of American Art
New York City
This museum began in the 1930s in Greenwich Village with a collection from Gertrude Vanderbilt Whitney. It would later move to West 54th Street and then to Madison Avenue. This year it found a 200,000-square-foot home near the High Line. Among the 18,000 pieces are works by Andy Warhol and Georgia O’Keeffe.

The State Hermitage Museum
St. Petersburg
It was founded by Catherine the Great in the 1760s. Its façade resembles a green-and-white confection. In its first-floor Treasure Gallery, or Gold Room, are golden pieces from Eurasia, the Black Sea and Asia. Russia’s State Hermitage Museum may be far from Europe’s better-known art hubs, but its size (spanning six buildings along the Neva River) and collection—more than 3 million items from around the world from the Stone Age to the early 20th century—are formidable. 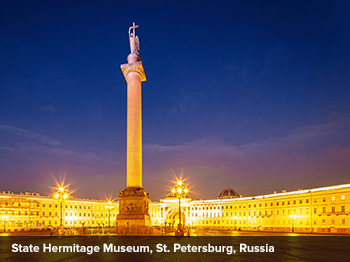 The National Gallery
London
Paintings from the mid-13th century to the early 20th hang on the walls of this Trafalgar Square landmark. The west wing turns the spotlight on the High Renaissance (Michelangelo, Titian and Raphael). In the east wing 18th- and 19th-century British artists, such as Gainsborough, Constable and Turner, take center stage.

Hagia Sophia
Istanbul
One of the seven wonders of the medieval world and the greatest surviving example of Byzantine architecture, the Hagia Sophia dominates the Istanbul skyline. The emperor Justinian ordered the structure built in A.D. 532 in a bid for eternal glory. To call it grand would be an understatement: The dome is 184 feet high and 102 feet wide. To put that in perspective, the Statue of Liberty without its base could fit underneath with room to spare. Head to the upstairs galleries to view the most intricate mosaics. 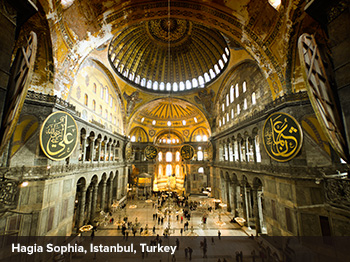 Museum of Qin Terracotta Warriors
near Xi’an, China
You could easily spend two days or more exploring the archeological wonder near China’s ancient capital, Xi’an, two hours by air from Beijing. Thousands of life-size clay warriors, part of the funerary complex of China’s first emperor, Qin Shi Huang, stand here to protect him in the afterlife. Historians believe that some 700,000 workers toiled on the mausoleum for more than three decades. Fun fact: Though the soldiers were crafted using molds, each has distinct facial features that were added after assembly.

Acropolis Museum
Athens
On the ground level, glass floors reveal sixth-century B.C. ruins below; the first floor is filled with korai (statues of female figures); and the third incorporates sections of the Parthenon frieze. Don’t miss five of the Six Sisters, Ionic columns that adorned the Acropolis for 2,500 years. 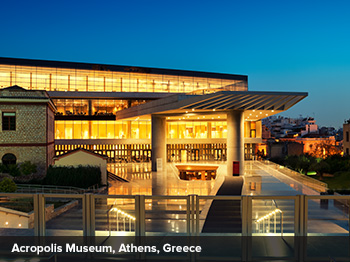