Like their island home, poised like a soccer ball launched off the toe of Italy’s boot, Sicilians are a thing apart. And visitors tend to fall hard for Sicily’s welcoming people. “Sicily is all about Sicilians,” says Paola Vasta, founder of Palermo hospitality consultancy VP Luxury Key (vpluxurykey.com). “They’ll open their doors to you in a way that is extraordinary.” And then they’ll ply you with fabulous food and send you off to explore their beloved island with a list of can’t-miss sights. Your only enemy here will be time. There’s never enough of it in which to see all the ancient temples, crumbling castles, volcanic vistas and vineyards—but you can certainly try. 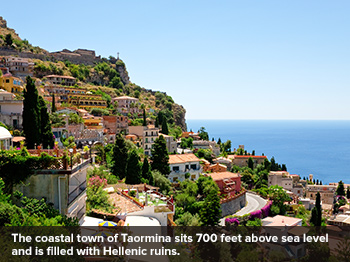 THE BASICS
About the size of Massachusetts and having a population of roughly 5 million, Sicily is the largest island in the Mediterranean and is reached from North America via connections from Rome (and other major European cities) to Palermo or Catania. Italy’s Meridiana Airlines (meridiana.it) offers a nonstop flight to Palermo from New York’s JFK airport that operates from April through October. Renting a car is a smart way to get around, and visitors with limited time should concentrate on the island’s accessible north for a mix of beautiful beaches, villages and cities as well as cultural attractions. 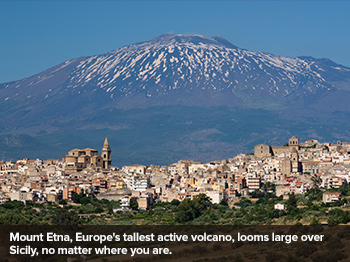 Intoxicating Taormina
Writers, expats and fashionistas have long been drawn to Taormina, a spectacular coastal town 33 miles north of Catania that sits nearly 700 feet above sea level and has a historic center that’s great for exploring on foot.

Start early with a stroll through the Giardino della Villa Comunale, public gardens thick with cypress, olive and almond trees overlooking the Ionian Sea. Then stop by Bam Bar for an almond granita, a sorbet-like treat topped with whipped cream and served with a side of brioche.

Nearby, the Teatro Greco, cut into a hillside, is thought to date from Hellenistic times (3rd century B.C.) and has jaw-dropping views of Mount Etna and a lineup of alfresco performances from spring into autumn. Shops selling beachwear, vintage maps of Sicily and olive oil line the Corso Umberto, Taormina’s main drag. At Ceramiche Farano, you can find classic hand-painted ceramics.

The town connects to the sea via a 2-minute ride on the funivia, or cable car, down to Mazzaró, where you can get to Taormina’s rocky but beautiful beaches. Isola Bella is spectacular, a tiny tear-shaped island reached by a narrow spit from the main beach. For an aperitivo with some of the best views, splurge on an Etna Spritz (a mix of Campari and Sicilian-blood-orange bitters that costs $24) on the terrace of the Belmond Grand Timeo. You’ll gaze over Taormina’s pastel facades, Mount Etna and the sea. And for fresh fish and a huge selection of Sicilian wines, reserve a rooftop table at Vicolo Stretto. 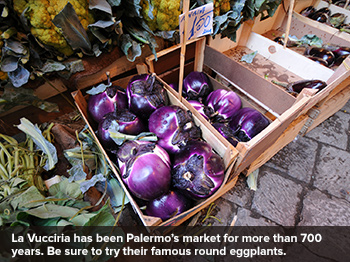 ETNA FROM ALL ANGLES
Europe’s tallest active volcano (10,990 feet), Mount Etna is a sight to see. On a clear day you can ride the Funivia dell’Etna cable car up 15 minutes from the base, on Etna’s south slopes, to 8,202 feet for unforgettable views of the craters and coastline. Alternatively, on the north slope consider a guided SUV tour with Sicily Off-Road to drive up an old lava flow.

Mount Etna’s rich soil produces some interesting wines. You can savor the fruits of the local nerello Mascalese grapes farther down the volcanic slopes at Murgo, a fifth-generation family winery where four brothers run a farm stay and restaurant. The restaurant, Tenuta San Michele, serves simple Sicilian specialties, such as caponata and salsiccia al ceppo (sausage spiced with wild fennel).

FEASTING ON CEFALÙ
Between Taormina and Palermo sits Cefalù, a former fishing village whose sun-bleached facades rise, Venus-like, from the sea. The Romanesque Chiesa de Cefalù, the cathedral in the heart of the old town, dates from the early 12th century and houses a fascinating mix of golden Byzantine mosaics and modern stained-glass windows. For impressive views, hike 45 minutes to the top of La Rocca, a rocky crag 885 feet above town, where you’ll pad around the ruins of a castle from the 13th century.

Just east of town you can learn to cook Sicilian specialties with Cinzia Bruneo and Antonio Sireci, who run the cooking school Sicilian Food Lovers at Villa Palamara, a 16th-century Dominican monastery that’s now a guesthouse. You’ll learn to hand-roll tagliatelle and cook with traditional Sicilian ingredients, such as salted capers and sardines, to create sarde e beccafico (sardines stuffed with citrus-flavored bread crumbs) and other dishes. Then enjoy the fruits of your labor on a sun-splashed terrace surrounded by olive and lemon groves. 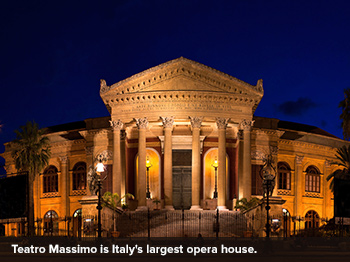 PALERMO FOR INSIDERS
Plan to spend at least a day rambling in Sicily’s largest city, Palermo, which is rich in Norman cathedrals, Baroque masterpieces and buzzing markets. “Palermo is the aristocracy, it’s the grande bellezza, it’s culture,” says Alexandra Buzzi, of Absolute Sicilia, a private-tour operator that gives guests out-of-the-box experiences in this city and elsewhere in Sicily.

La Vucciria has been Palermo’s market for more than 700 years. But now Mercato del Capo and Ballarò market are the liveliest ones. Vendors shout out their wares—everything from artichokes, anchovies and the island’s round eggplants to fresh octopus sliced and diced right before your eyes and splashed with lemon, salt and parsley.

Absolute Sicilia can arrange tickets in the royal box (where parts of The Godfather III were filmed) at the Teatro Massimo, Italy’s largest opera house and the source of much Sicilian pride. The company can also point you to Palermo secrets, such as tailor Filippo Cali, a favorite with Sicilian ladies for his beautiful silk dresses (from $315).

Learn about heirloom products and the island’s slow-food movement over dinner in the home of Palermo chef Bonetta dell’Oglio, whose seasonal menu may include honey (from Sicily’s famed black bees) drizzled over goat cheese and locally caught amberjack with pine-nut sauce.

WESTWARD BOUND
Six miles west of Palermo is Monreale, a hilltop village where golden mosaics cover the walls of Cattedrale di Monreale, a magnificent Norman church. Just an hour west of here, along the road to Trapani, you’ll find the A.D. 5th century Tempio di Segesta, built by the ancient Greeks and considered among the best-preserved Doric temples in the world.

In the heart of olive country near Trapani, sleep inside a 1,000-year-old tower at Agriturismo Sanacore. During the harvest (early October to mid-November), lend a hand with the picking or watch olives being pressed.

At the port in Trapani, catch a hydrofoil for the 25-minute ride to Favignana, a butterfly-shaped island in the Egadi archipelago (Europe’s largest marine reserve). The island is home to 4,000 people and once was the center of Sicily’s tuna industry. Commercial fishing here has stopped, but Favignana now attracts travelers for its turquoise waters and bike-friendly terrain.

“You feel the island more on a bicycle,” says Francesco Fiore, who runs I Pretti, a boutique hotel inside a former sardine factory. Rent your wheels from Noleggio Grimaldi, then pedal to La Pinnata for a pane cunzato, a pressed-bread sandwich filled with anchovies, sun-dried tomatoes, pepperoncini-infused olive oil and capers. It’s as comforting and colorful as Sicily itself.