Upon waking up in Melbourne, Mornington Peninsula is a good place to.... Read More

All that glitters is gold in this city of sunshine, sand, sea.... Read More

The World's Most Colorful Beaches

Grab a towel, pick a color of the rainbow and escape the cold.... Read More

For nature-lovers, a visit to Australia’s Great Barrier Reef can be a quasi-religious experience. Those who have visited the Reef know that the clarity of the water, the intensity of the colors, even the quality of the antipodean light is like nowhere else on earth. But even Aussies disagree on the best way to tackle the Reef: How do you approach a natural structure that sprawls over 1,400 miles? Luckily, with a little planning, you can easily capture the best of this marine universe. 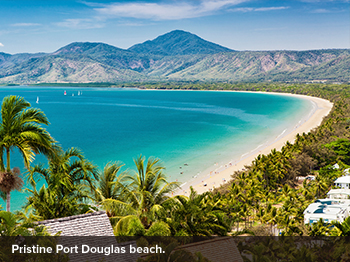 First, get to know the lay of the land. The Great Barrier Reef is actually a web of 2,900 separate reefs that lie off Australia’s northeast coast, looking from the air like a giant blue rash. The most impressive coral formations are between 40 and 100 miles offshore; and although there are hundreds of islands and cays out there, only a handful have resorts that are actually on the Reef. It’s easiest (and most economical) to stay on the mainland and take day trips on high-speed motorboats to either dive or snorkel. Almost all of these boats (which can be booked directly or through resorts) provide tanks for certified divers, but snorkeling is also prime here—in fact, the colors of the Reef are most vivid in shallow, sun-filled water. 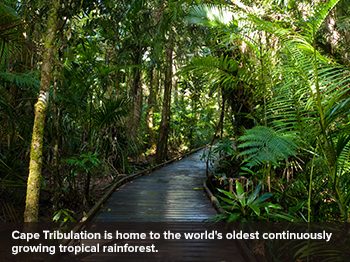 CAIRNS
Flights to northern Queensland arrive in the booming city of Cairns, but you might prefer to recover from jetlag in the calm beachside enclave of Palm Cove, only 30 minutes from the airport. Seek the true local treasures farther north: Rent a car and follow the spectacular Cook Highway for about 40 miles to Port Douglas—a former gold-rush port that had become a virtual ghost town in the 1960s but is now one of Australia’s most glamorous resorts. Despite its newfound popularity, “Dougie” (as Aussies affectionately call it) hasn’t lost its casual ambiance. Mortals and movie stars alike stroll in shorts and flip-flops down the sleepy main road lined with palm-shaded cafés, to the pristine, 4-mile-long arc of powdered sand. Prawn trawlers bob offshore alongside millionaires’ yachts.

Port Douglas also specializes in large-scale visits to the Reef, with state-of-the-art catamarans whisking groups of as many as 450 from two large marinas to submerged platforms on Agincourt Reef, an hour and a half offshore (Quicksilver Connections, quicksilver-cruises.com; $160 for the day).

Fifty miles north, at the point where the Reef comes closest to the coast, is one of the most alluring refuges in all Australia: Cape Tribulation. Captain James Cook’s ship, the Endeavour, ran onto the Reef here in 1770, and he named the area Cape Tribulation “because here began all our troubles.” Hidden at the heart of the world’s oldest continuously growing tropical rain forest (at 135 million years old, it makes the Amazon, just 40 million, seem juvenile), Cape Trib is covered in lush greenery. To get there, take a car-ferry across the Daintree River, which is cocooned by ancient mangroves and teeming with man-eating crocodiles.

The only signs of civilization in Cape Trib are a few deluxe eco-lodges and a small grocery store; the beach lies on one side of a quiet road and the Wet Tropics World Heritage wilderness on the other. Of course, it’s the Reef you’re really here for. From this low-key outpost, small boats carrying only a dozen passengers depart straight from the beach. In just 45 minutes they’re moored in luxuriant solitude on Mackay Caye, one of the most fertile sites on the Reef. As you dart from one spectacular scene to the next, don’t miss the giant clam rookery. A dozen mega-mollusks, each 4 feet wide, 500 pounds and brilliantly colored in greens and purples, sit up invitingly in their beds of soft coral. When you touch their velvety mouths, the century-old shells slowly close into fixed, happy smiles—an otherworldly scene that somehow captures all the allure of the Great Barrier Reef. 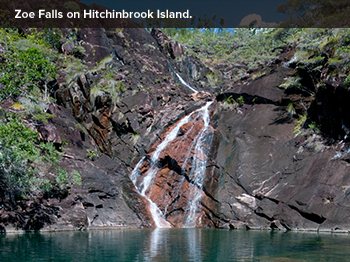 RANKING THE REEF
Best Diving
Tiny Heron Island, a dive resort at the southern end of the Reef, has iconic status among Australian divers. While other Reef resorts are built on continental islands, and thus at a distance from Active marine life, Heron is smack dab in the action. The warm tropical waters blend with the cooler southern currents to bring a constant traffic of large fish. At the bommy, a pillar of coral only 500 yards offshore, shark, turtle and manta ray sightings are all but guaranteed. Another 20 top dive sites are within just a few miles.

Best Beach Hiking
The energetic shouldn’t miss Hinchinbrook Island, a serrated national park south of Cairns that includes the 20-mile Thorsborne Trail. Walk along the idyllic tropical beaches to see dozens of rock pools, mountain streams and waterfalls along the way. A boat then picks you up at the end. A vigorous detour to climb 3,000-foot Mt. Straloch takes you to the wreck of an American B24 Liberator that crashed here during World War II.

Best Sailing
The southern hemisphere’s best-kept secret for bareboat charters is the Whitsunday archipelago, a cluster of 74 islands—only 8 of which are inhabited—in seas as calm as a swimming pool. The water here is an electric blue, thanks to the particles of sediment reflecting the sunlight. You can rent a yacht with a skipper or take out yourself.

Most Vivid Cultural Experience
At the top end of the Reef sits Poruma Island, on a coral cay in the Torres Strait en route to Papua, New Guinea. Get here by private charter plane from Cairns or Horn Island; you’ll definitely feel as if you’ve left the rest of Australia behind. The 180 inhabitants are Melanesians rather than Aborigines, and they’ve built a string of thatch-roofed, open-plan huts, each with a king-size bed and plunge pool, at the gaigalkuth, or “sunset end,” of the island. Guests at the resort can go snorkeling to see giant painted crayfish, or spearfish for coral trout (011-61-7-4090-0170; poruma.com).