Stroll the boardwalk, kayak through a wildlife refuge, and feast on delicious oysters in this city by the sea....Read More

Virginia Beach for the Kids

Here’s a sampling of fun fall activities that will keep your kids grinning—from learning how to hang 10 to watching the graceful aerobatic maneuvers of the Blue Angels....Read More

Virginia is for Wine Lovers

There's something about Virginia that makes people want to grow grapes. George Washington certainly tried at Mount Vernon, as did Thomas Jefferson at Monticello....Read More

In the middle of one of the oldest rivers on the planet, Whale Rock emerges like some craggy Moses parting the angry waters. At this point, rafters on West Virginia’s New River have just negotiated a quartet of easy warm-up rapids. To those in the know, the ancient gray boulder acts as a billboard. The message: “Serious Adrenaline Zone Ahead.” Just beyond, the New River drops over a ledge and out of sight into the New River Gorge. For the next 8 miles the braided waters boil through the “Grand Canyon of the East,” mined with massive drops and swirling waves that can reach heights of 7 feet. Helmet-clad rafters confront a maelstrom of rapids whose names are legend: Middle Keeny, Double Z, Fayette Station.

Each year, some 125,000 people plunge down this stretch of the New River. They howl through the famed rapids and sprawl on sun-warmed seats during lazy stretches. Some float for a few hours and then dawdle over a riverside lunch; others elect a multiday adventure with guides who set up tents and fix meals. 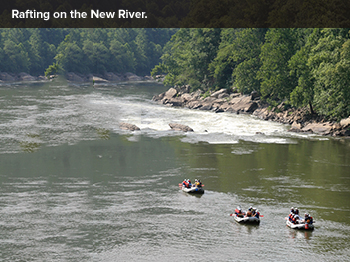 During the cooler days of fall and spring, rafters can enjoy stretches of solitude in the lush canyon. On warm days, however, a party atmosphere rocks the river. “It’s easy to see why,” says Dave Arnold, co-owner of Class VI, the region’s premier rafting service. “This river is warm, which means no wetsuits. And the New has the most variety of white water you could ask for.” While spring brings huge rapids, the low-water technical runs encountered later in the year are just as challenging.

AS WILD AS YOU WANT TO BE
Despite its name, the New River spent the last few million years carving a 1,000-foot-deep gorge through the Southern Appalachian Mountains. It’s hard to imagine a better place to sample river rafting, whether you’re a river rat or a paddling neophyte. First-timers won’t need serious conditioning. After a twisty bus ride to the starting point, you don helmets and life jackets, grab paddles and pile into rafts that hold 6 to 8 riders, including a guide. As the guide barks out commands, you quickly learn how to power forward, back-paddle or simply hang on. It takes but a few strokes to forget anything but the swirling waters ahead.

The mild rapids on the upper stretches of the New River are a lollygagger’s delight—foamy ledges and boulder gardens jostle the raft without chattering your teeth. Adrenaline junkies head to the river’s lower section, where the thrills crank up with 10-foot drops and waves that can flip a raft (occasionally, at least).

Class VI also runs trips on the nearby Gauley River. The run begins at the base of a dam where three tubes spew water into the riverbed at speeds of up to 80 miles per hour. The result is one of America’s great white-knuckled white-water experiences: a 28-mile-long vortex with dozens of supersized rapids that leave rafters shaking their heads in wonder and maybe a little fear.

WHITE-WATER R&R
Most rafting trips take place in wild country, but that doesn’t mean you have to rough it. In the ’70s, outfitters followed the harried parent policy when it came to feeding: If they’re hungry enough, they’ll eat anything. These days, however, a Class VI spread might include freshly caught trout, morel mushrooms and ramps (garlicky wild greens) in vinaigrette. Even the PB&J is made with fresh-ground peanut butter and jelly from local berries.

Rafters can expect pampering off the river, too. The Class VI base camp, a complex of handsome wooden buildings under the forest canopy, obliges guests with a range of accommodations from a wooden shelter that’s just a step up from a tent, to a 3-bedroom mountain lodge with heated tile floors and a hot tub.

As for dining, Class VI offers a casual option, the family-friendly Chetty’s Depot, as well as the upscale Smokey’s on the Gorge, where the barbecued wild boar ribs and rainbow trout come with a view of the river gorge. Class VI will even arrange a private dinner at a secluded timber cabin overlooking the gorge. There’s more than one way to run a river.