At first light you were schlepping a plastic bin through an airport security line. Now, the only line you’re worried about is which of the pitched white curves of Deer Valley’s Ontario Bowl to ski down—still untracked, it should be noted, at two in the afternoon. Visiting Park City is like slipping through a rabbit hole: It’s a quick, convenient and complete getaway. This historic mining town, just 40 minutes from the Salt Lake City airport, beguiles you with its downtown full of top-notch restaurants and galleries, and then tempts you with a trio of world-class ski resorts. Welcome to wonderland, Alice.

THE SERENDIPITY OF SILVER
While many ski towns try to manufacture charm, old Park City’s nearly abandoned boxy Wild West storefronts and frilly Victorians were waiting in mothballs, courtesy of the miners who chiseled more than $400 million worth of silver out of the surrounding Wasatch Mountains in the 1800s. Today, Park City’s fairy-tale Main Street twinkles with lights and brims with activity. Since the skiing here is considered less challenging than at neighboring resorts like Snowbird and Alta, the clientele tends to be of intermediate skill—couples and families looking for a well-rounded experience that includes shopping, dining and relaxing.

Pack snow-proof footwear, because this is a town for strolling. On foot, you’ll discover a warren of diversions tucked above, below and along Main Street and Park Avenue. Browse Bahnhof Sport for skiwear, Chloe Lane for designer jeans and Mary Jane’s for funky women’s clothing and accessories. A free trolley travels Main Street if you find yourself loaded down with packages. 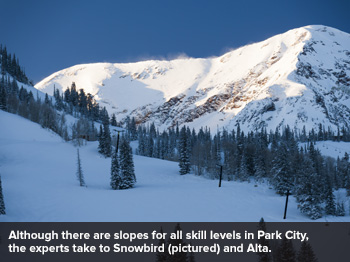 Shops and galleries seem to be outnumbered only by restaurants. It’s not easy to find a bargain, but the financial hit is worth it for some memorable meals. Rustic chophouses serve chile-rubbed prime cuts; trattorias could hold their own in Tuscany. The name on locals’ lips is Shabu, where you can cook your food in sizzling broth at the table. The atmosphere is fun and informal, and the “freestyle Asian cuisine” playfully pairs flavors, like sake-steamed sea bass with black bean and garlic paste.

Despite what you may have heard about Utah’s bewildering liquor laws, nightspots abound as well. Those wishing to close out a day on the slopes with a cocktail need only pay a nominal “membership fee” to get in to most clubs. Whether your tastes lean toward meeting for martinis and appetizers (Jean Louis) or drinking beer and dancing until dawn (Harry O’s), you can find it in spades in Park City. In Utah terms, Park City is “Sin City,” and the town takes pride in that nickname.

UP ON THE SLOPES
Above all, Park City is a ski town. Its fortunes were transformed from silver to snow in 1963, when a local mining company opened Treasure Mountain to skiing. Photos at the Park City Museum show zealous skiers traveling through old mine shafts and surfacing in soot-covered parkas on mid-mountain slopes.

Today Park City has three ski resorts, all regularly deluged with the dry-as-dust Utah snows that drift down the east side of the Great Salt Lake. To play up the easy access, the city's Quickstart program lets skiers trade in airline boarding passes for free same-day lift tickets (restrictions apply; parkcityinfo.com/quickstart). 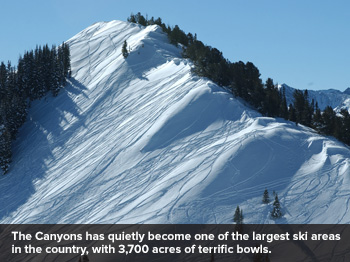 Few ski hills are as centrally located as Park City Mountain Resort. To hit the slopes, all you need to do is hop on a chairlift downtown and soar over the city up the mountain. On the way down, skiers and snowboarders still schuss past the occasional mining relic. This 3,300-acre resort is especially well suited for families, thanks to its great location, abundance of ski-in/ski-out lodging, diversity of runs and teen-pleasing terrain parks (even lighted for night-riding) that routinely win kudos from snowboarding magazines. Near the base is the Alpine Coaster, a two-person roller coaster that blazes downhill.

Four miles north, The Canyons has quietly become one of the largest ski areas in the country, with 3,700 acres of terrific bowls, gullies and ridiculously long, mellow cruisers. It's still expanding, 300 acres of aspen glades were added in 2008 around the new Dreamcatcher chairlift. And there's a growing village at the resort's base, though guests staying there might feel a bit isolated from Park City's other attractions.

The area's toniest accommodations can be found sidled up to Deer Valley Resort, a mile south of downtown Park City. This exclusive mountain prides itself on elite customer service and amenities. To prevent lift lines and give skiers plenty of elbow room, ticket sales are limited. Trail grooming approaches high art, and snowboarding is prohibited. Mid-mountain restaurants cater to the upscale clientele with dishes like grilled Atlantic salmon with orange hollandaise; the resort even markets its own line of signature foods (cilantro-lime glaze, anyone?). On sunny afternoons, after their two-hour lunches, guests contentedly sip blueberry mojitos on The Beach, where Adirondack chairs are lined up in the snow.

The 1,825 acres of ski terrain at Deer Valley gets better every year. Guests tend to gravitate to those delightful corduroy groomers, leaving the wide-open steeps and glades for accomplished skiers off the Empire and new Lady Morgan chairlifts.

Not that you need more variety, but the scissor-sawed peaks ringing the horizon are home to more than a half-dozen additional ski resorts. These include Alta and Snowbird at the south end of Salt Lake City in Little Cottonwood Canyon, Robert Redford's Sundance near Provo, and the virtually undiscovered expanses of Snowbasin and Powder Mountain north near Ogden.

OLYMPIC PURSUITS
The world discovered Park City in 2002, when it hosted many events of Salt Lake City’s wildly successful Winter Olympics. In the years since, visitors have been able to enjoy the multi-million-dollar facilities that remain. The Olympic Nordic Center at Soldier Hollow, 10 miles southeast of Park City, provides 19 miles of prime cross-country ski trails and snowshoeing terrain. You can even test your skiing-and-shooting skills at the biathlon range.

Sign on for the ride of your life at Utah Olympic Park. When athletes aren’t training at this venue—with its Nordic ski jumps, a bobsled/luge/skeleton track, and a ski hill and landing pool for freestyle tricks—visitors are let loose to live out their Olympic dreams. When else will you have the chance to ride an Olympic bobsled down the world’s fastest track?

“It’s fast. It’s raw. It’s not comfortable,” warns the guide giving the safety talk. “You will reach speeds up to eighty miles an hour and experience four to five Gs of force.” It turns out he’s not kidding. For 58 terrifying seconds, you and two other guests hunch behind a trained driver to careen down the sinewy track, rocketing sideways through the curves. The force bobbles your head and shudders your spleen, while a video-game blur occurs somewhere beyond your helmet. Then suddenly, in a shower of slivered ice, the driver brakes and the ride is over. Knowing assistants steady your shoulders as you shakily emerge in a state of giddy, dazed euphoria.

Park City just seems to have that effect on people.

Winter may still be months off, but the Town Lift on Park City’s Main Street hums around a .... Read More

You don't need be an avid skiier or a film buff to enjoy this.... Read More

Once the fluffy white stuff melts in this fantastic Utah town, .... Read More