History-Rich Atlanta: 10 Spots You Should Experience

Packed with Southern charm, history, and modern sophistication, Atlanta offers plenty of options for travelers of diverse interests and ages. Museums, green spaces, exciting dining and nightlife, beautiful sports venues, and theaters are just some of the multitudes of sights and experiences this vibrant city offers. If you are planning a visit, here are some spots to consider.

With 3,200 acres of wilderness at your disposal, you could spend all day hiking and exploring Atlanta trails with a view if nature is what moves you. Stone Mountain Park also has a cable car ride, a scenic railroad, a miniature golf course and two full-size 18-hole courses, a seasonal outdoor park with life-size dinosaur replicas, and a seasonal indoor dinosaur-themed play area. A group of homes built between 1793 and 1895 are open to tour. In the summer, a laser show lights up several carvings on the mountain rocks depicting life in the historic South.

This museum, whose motto is “Justice and Dignity for All” opened its doors in 2014 and has received millions of visitors since. Popular exhibits include papers and personal items that belonged to Dr. Martin Luther King Jr. as well as stories about the struggle for human rights around the world today. The National Center for Civil and Human Rights also boasts many interactive exhibits like a lunch counter where visitors can experience firsthand what it was like to be part of a “sit-in” in the American South during the Civil Rights Movement, when peaceful protesters would ask to be served at whites-only lunch counters to oppose segregation. 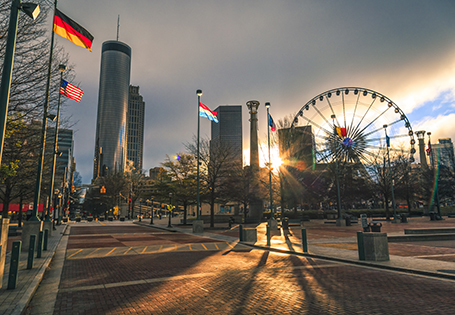 Visitors of all ages will enjoy learning about the history of puppetry around the world in an immersive environment. The Center for Puppetry Arts offers many exhibits, including a collection of more than 500 puppets, props, and costumes honoring Jim Henson’s legacy, which is the largest collection of such items in the world.

An urban oasis in midtown, the Atlanta Botanical Garden includes 30 acres of outdoor gardens, an award-winning children’s garden, a one-of-a-kind canopy walk, and an innovative edible garden featuring an outdoor demonstration kitchen. The Fuqua Orchid Center is home to one of the most important orchid collections in the United States, with many rare species on display. The garden is also known for its conservation work with endangered frog species from around the world.

Dr. King is one of Atlanta’s most beloved sons, and the Martin Luther King Jr. National Historical Park, named in his honor, consists of several buildings including King's childhood home, the original Ebenezer Baptist Church where he was a preacher, and the Martin Luther King Jr. Center for Nonviolent Social Change. The National Park Service restored many of the neighboring buildings to their 1930s state when King was growing up and evolving as a leader in the Civil Rights Movement. Visitors can go back in time and imagine what life was like in those transformative years.

The world’s most famous beverage and its secret formula have their roots in this southern city. Learn Coke’s story through exhibits that include more than 1,200 authentic artifacts, from bottles to delivery trucks. Get a behind-the-scenes look at the bottling process or sample Coca Cola products from all over the world. Don’t leave World of Coca Cola without taking your picture with a 7-foot-tall polar bear. Roar!

The Georgia Aquarium is the United States’ largest aquarium, with more than 10 million gallons of fresh and saltwater that are home to more aquatic life than any other aquarium in North America. It has an expansive shark gallery that brings these magnificent predators safely face to face with visitors. Other popular exhibits are the Beluga whales, African penguins, and California sea lions. The aquarium offers several shows and opportunities to interact with some of the aquatic life.

A combination of indoor and outdoor areas makes the Fernbank Museum of Natural History unique in many ways. Inside you’ll discover dinosaurs, live animals, ancient fossils, prehistoric cultures, and new science discoveries. Outside at the WildWoods and Fernbank Forest, you can explore 75 acres of nature that holds outdoor exhibits, breathtaking walking trails, a canopy walk, native wildlife, and playgrounds.

In the middle of the hustle and bustle of the city is a beautiful, 211-acre oasis of nature. Every year Piedmont Park hosts major festivals such as the Atlanta Dogwood Festival, the Atlanta Jazz Festival, Atlanta Pride and many more. Walk or jog around the meadow, fish at Lake Clara Meer or take a bike out on one of the many Atlanta trails. Bonus — many of the activities available here are free.

A beautiful building designed by famed architects Richard Meier and Renzo Piano, the High Museum of Art houses a collection of more than 18,000 works of art. These include an extensive anthology of 19th and 20th century American fine and decorative arts, as well as photography and folk work that showcase artists from the American South. The museum is also home to an impressive collection of modern art and African art that includes works dating all the way back to prehistoric times.

Speaking of art, read Tiny Doors: A New Kind Of Outdoor Art In Atlanta to take a tour of a unique art installation throughout the city.