A Tale of Tuscany: Chianti

The mighty Pyrenees mountain range stretches 270 miles from the Mediterranean to the Atlantic, straddling the border between France and Spain (and engulfing the Principality of Andorra). In France the mountains are divided into three main départements, Hautes-Pyrénées, Pyrénées-Atlantiques and the farthest east, Pyrénées-Orientales, which includes France’s southernmost Mediterranean coast. 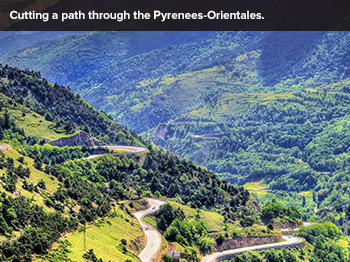 Overshadowed by France’s Côte d’Azur and Spain’s Costa Brava, this stretch of the sun-kissed French Mediterranean offers turquoise waters, bold wines, hearty seafood dishes and fortified towns, like Collioure, once frequented by the likes of Henri Matisse and Picasso. And just a short drive from the coast, the scrubby Pyrenees foothills open up to a world of crumbling Cathar fortresses, ancient caves and a wild landscape that begs you to slow down and savor the moment. Here are three distinctly different drives all of which serve up hearty tastes of French Catalonia.

DRIVE 1:
Canet-en-Roussillon to Château Peyrepertuse
From the picturesque center of Canet-en-Roussillon, the scenic and serpentine D12 road to Tautavel winds around and climbs over arid foothills, offering vast panoramas of Pyrenees wilderness for about 20 miles before encountering the Aragonian mountain village of Vingrau. Mountain villages don’t get much sweeter, smaller or slower than this, so park yourself at a patio table at Lou Barral and enjoy the snail’s pace over a plate of serrano ham, local manchego and marinated anchovies. 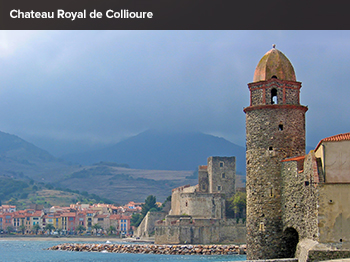 Next stop: Tautavel, 5 miles west and home to Tautavel Man, the 450,000-year-old fossilized remains of a hominid discovered in the nearby Arago Cave. Tautavel Man is on display with a variety of other archeological relics at the Musée de Préhistoire de Tautavel. For those seeking a more intimate look into the past, private hikes and opportunities to volunteer at archeological cave digs can be arranged through the museum. In 2015 volunteers discovered a 550,000-year-old hominid tooth.

Push west another 15 miles, past fragrant juniper and cedar, and you’ll reach Cathar country, whose mountain castle ruins tower dramatically over the weathered landscape. The extinct Christian sect of Cathars flourished in southern France between the 12th and 14th centuries and left behind dozens of castles and historic sites across the Pyrenees. If you have time to see only two, visit Château de Quéribus and Château de Peyrepertuse, a half hour’s drive apart. The former is known as the last Cathar stronghold; its intricate vaulted pillar room dates from A.D. 1020. Peyrepertuse is bigger, older and more dramatic, and it dates from the 1st century B.C., when the Romans occupied it. Like most Cathar châteaus, these two teeter atop the rocky summits they were built into. Each requires a 25-minute hike to reach, so don’t attempt to visit in flip-flops, as many day-trippers from the beaches mistakenly do.

A few good restaurants line the road to Peyrepertuse. Built in a grove of lanky pine trees, L’Aouzine is a relaxed terrace bistro serving tapas that emphasize organic and local ingredients, like chicken satay and spiced duck. For more-standard fare, pop over to Le Donjon next door, for a croque monsieur, a glass of the local Rosé d’Octobre or a scoop of homemade violet ice cream, a well-deserved way to cool down after the steep ascent. 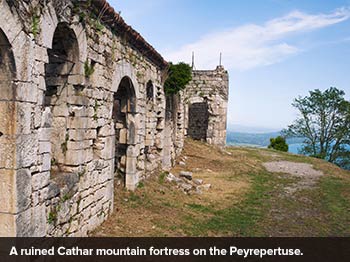 DRIVE 2:
Canet-en-Roussillon to Collioure
The 15-mile coastal drive south on D81A from Canet-en-Roussillon to Collioure starts off on a road wedged between the Mediterranean to the east and brackish wetlands to the west. It’s flat and sandy, but the mountains loom in the distance as you approach Collioure. You’ll drive alongside a spacious beach strewn with driftwood. Sand dunes here are sculpted by the howling northwest wind, known as the tramontane, which whips the landscape but makes the beach a popular surfing and kite-surfing destination. The road also passes Etang de Canet–St Nazaire, a salt lake that’s a haunt of migratory pink flamingos.

Continuing south, the roads leave behind oat-colored plains and enter the lush green hills and vineyards that surround Collioure, a picturesque port town that once drew Picasso, Matisse and Charles Rennie Mackintosh. Collioure at sunset is a sight to behold: When the sun is just right, about to be gobbled up by the Pyrenees, the town’s magnificent 7th-century Château Royal de Collioure and 17th-century church Notre Dame des Anges become electrified in pink and copper. The town’s light is precisely what drew artists in the past, and they haven’t stopped coming. Collioure’s waterfront promenade, Boulevard du Boramar, is a popular gathering place for painters and musicians during impromptu evening concerts.

Follow Boulevard du Boramar to Place de l’Eglise, where gelato shops and bars overlook the seawalls. Grab a table at Chez Simone, where you can listen to the crashing waves while nibbling on tapas. For dinner, try a warm bowl of saffron-scented fish soup with rouille and croutons, a hearty cassoulet or a plate of briny oysters at Le Trémail. It’s situated in a small plaza and has always been a great place to people watch while lingering over a rich crema catalana (crème brûlée). The promenade along Boulevard du Boramar turns into a jetty where Chapelle St Vincent sits on a pile of sea-swept rocks at the town’s north end. Bring some local flavor back with you from Les Anchois Desclaux, a century-old gourmet shop that sells pots of salted anchovies, gingham-topped jars of rouille and bottles of local wine. 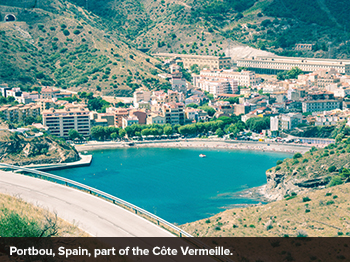 DRIVE 3:
Collioure to Portbou, Spain
The coast from Collioure to the Spanish border town of Portbou is part of the Côte Vermeille (Vermillion Coast), and its roller-coaster D914 road is spectacular. The road hugs the water’s edge so closely, you’ll be swerving under seagulls and through intermittent gusts of salt air while gravity pulls you closer and closer to Spain.

Fortunately, there are many pulloffs where you can stop to admire the views of the jagged cliffs plunging to the bays below and vineyards rolling up to the west. Some of the rest areas even have wine-tasting kiosks where you can sample local varietals. Cave Tambour Winery is one such cliff-top stand hawking sweet AOP Banyuls and drier AOP Collioure, wines that dominate in the area. Or for a proper tasting, stop at Domaine St Sébastien, on the main strip in Banyuls-sur-Mer. The winemaker, Romuald Peronne, and his friendly wife, Céline, who runs the tasting room, turn out excellent expressions of the region’s time-honored wines. Their Inspiration Minérale 2013 is an elegant blend of 90% gray grenache and 10% white grenache that both ferments and matures in the barrel.

If you feel like taking a dip, check out the Sentier Sous-Marin, an underwater trail off Banyuls-sur-Mer’s Plage de Peyrefite. Here you can spot Posidonia grass, red coral, bonito, amberjack and white skate in a roped-off protected area where boats and fishermen are forbidden. Snorkel gear is available for rent, but those with their own goggles can do it free. For lunch it’s scorpion fish or roast local lamb with creamy chèvre gratin at La Littorine, inside the Hôtel Les Elmes.

Finish the journey by following the last stretch of road to Portbou, Spain, whose narrow streets are worth exploring for an afternoon, especially for their distinctive Catalonian culture and cuisine. For a taste of local life, pop into Bar El Caliu for a glass of Rosado and a plate of tapas. As with all things in this part of the Pyrenees, don’t expect speedy service. Instead, do as locals do and savor every Catalonian moment.