Highway 101 skirts the 20-mile stretch of Pacific coast from Del Mar to Oceanside, north of San Diego. In the classic beach communities along the way, you’ll find some of the area’s finest golf courses, spas and restaurants. The scenery changes every few minutes as beautiful beaches give way to charming towns.

HOLLYWOOD RETREAT
Bing Crosby put Del Mar on the tourism map when he recorded “Where the Surf Meets the Turf,” the theme song of the Del Mar racetrack, in 1941. The crooner was a major investor in the original 1937 track, still used by the Del Mar Thoroughbred Club. In those days a glitzy Hollywood crowd vacationed in Del Mar, betting on the races before catching shows by Dean Martin, Jerry Lewis and Liberace at the Hotel Del Mar, now the chic L’Auberge Del Mar. 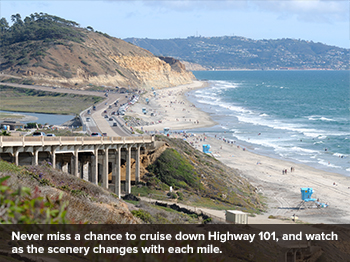 Today, Del Mar retains that early sense of glamour and exclusivity while embracing outsiders seeking a taste of the good life. Visitors sample some of SoCal’s freshest ingredients at chef Carl Schroeder’s Market Restaurant + Bar, No. 3 on Zagat’s list of top San Diego County restaurants. Addison, at the Grand Del Mar, is another of San Diego’s top tables, thanks to the talents of chef William Bradley. The lavish resort’s spa and Tom Fazio golf course are also open to the public. And the Spa L’Auberge pleases locals and visitors alike with its “Seaside Sojourn” treatments, employing techniques and ingredients from Hawaii and Asia.

Tudor- and Spanish-style buildings lend a sedate air to Camino Del Mar, which bisects Del Mar’s downtown village. Sophisticated shoppers browse in chic boutiques and galleries, then sit down under the bougainvillea at Café Secret.

At the village’s northernmost point, Del Mar Plaza evokes Tuscany with sea-view terraces and boutiques nestled in rock walls. Check out the temptations at Urban Girl Accessories and Ooh La La before sampling wine and antipasto alfresco at Il Fornaio

Continue shopping a few minutes north in Solana Beach, where stylists and designers frequent some 85 fashion and home decor shops on Cedros Avenue. End the day on a sunset balloon ride with California Dreamin’ for the ultimate taste of the high life.

QUIRKY SURF TOWNS
Local pranksters regularly costume the Cardiff Kook, a much-maligned surfer statue marking the entry to three funky beach towns: Cardiff-by-the-Sea, Encinitas and Leucadia. Beyond the Kook, Cardiff’s most endearing attraction is VG Donut & Bakery. Its melt-in-the-mouth doughnuts are so fabulous that fans rise before dawn to get them freshly baked. (And, in case you’re wondering, VG stands for very good.) 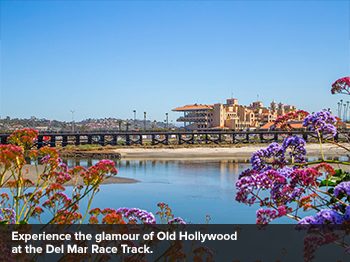 Funky shops and cafés line Highway 101 through Encinitas and Leucadia. Surf films and old-time favorites like The Rocky Horror Picture Show play at the 1928 La Paloma Theatre. Thanks to the comeback of vinyl albums, the venerable Lou’s Records is still a must for music lovers.

Beachgoers of all sorts congregate at Moonlight State Beach, where new recently facilities opened. In Leucadia, locals hang out on secluded Beacon’s Beach, at the foot of Neptune Street. If you want to test your balance atop a board, you can rent gear from Progression Surf. At Hansen Surfboards, you’ll find the latest beachwear, flip-flops, sunglasses and more. To complete your education, learn the history of surfboards at Oceanside’s California Surf Museum.

FAMILY TIME
“More, more, more!” may as well be the motto of Carlsbad’s Legoland California and its ardent fans. New rides and exhibits open annually at the original park, which is beloved by kids and adults who have never outgrown their fondness for the colorful mini bricks. The adjacent Sea Life aquarium mesmerizes overexcited kids with moon jellyfish and sharks, and a water park (open seasonally) saps all remaining energy. The Legoland Hotel, filled with clever diversions, from giant dragons to pirate-theme rooms, stands right beside the park—thus cementing Carlsbad’s standing as North County’s most family-friendly city.

It’s not all about the kids, however. Grown-up escapes in Carlsbad include elite golf courses and spas at La Costa Resort & Spa and the Park Hyatt Aviara Resort, where kids can play at the Aviara Kids Academy while parents enjoy more adult pursuits. For an unusual immersion in Carlsbad’s history, reserve the exotic Oriental Room at the Carlsbad Mineral Water Spa for a carbonated alkaline mineral bath using water from wells discovered by John Frazier in 1882. Frazier learned that his water was similar to that in Karlsbad, Bohemia, and laid out Carlsbad around his well. To this day locals visit kiosks in front of the Old World spa to fill bottles with the alkaline water, which is said to promote energy, weight loss, detoxification and general good health. Complete the eastern European experience with a massive deli sandwich or a schnitzel dinner at Tip Top Meats, a European deli and restaurant opened by German expat John Haedrich in 1967.

A different kind of water lures families to Carlsbad’s Agua Hedionda Lagoon, where you can try kayaking, stand-up paddleboarding and other wet fun with California Watersports. Then pay a visit to the Buena Vista Audubon Society Nature Center, on the Buena Vista Lagoon, which straddles Carlsbad and neighboring Oceanside. Trails set amid native plants showcase North County wetlands. Inside the center, an extensive taxidermy display includes pelicans and owls in flight and a bobcat curled up like a kitten.

End your North County excursion at the Oceanside Pier at sunset. You can catch a 25-cent shuttle to traverse the 1,900-foot-long pier, one of the longest overwater wooden piers in California. Reward yourself with a chocolate malted from Ruby’s Diner at the pier’s tip. Now, that’s a perfect San Diego ending.